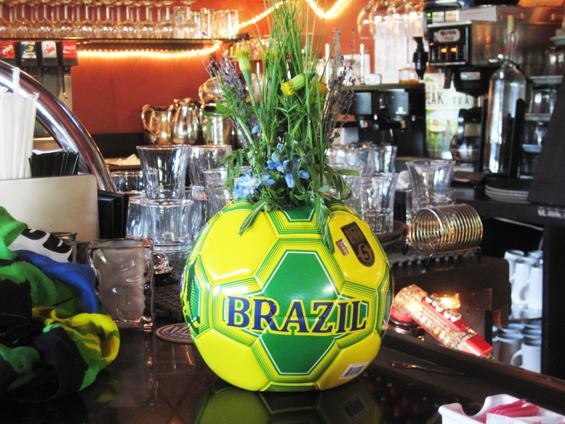 Ian Froeb
Yeah, the Brazilians LOVE football.
Keegan is out of town for a few days. I will try to fill his boots.

The highly anticipated meeting between Brazil and Portugal -- ranked #1 and #3 in the world, respectively, by FIFA (and let's not even get into the historical baggage) -- was a dud. Yellow cards dominated the first half. The second half wasn't as chippy, but neither side managed many chances. Portugal, especially, seemed content to play for a draw, knowing that, unless Ivory Coast beat North Korea by nine goals, such a result would send them into the round of sixteen.

A dud, yes, but at Coco Louco Brasil it was also one heck of a party.

Roughly 30 supporters, many clad in Brazil's distinctive yellow jersey, gathered at the Central West End restaurant for the game. Even before kickoff, someone was blowing on a whistle, and within minutes of the start the tambourines came out. Someone had a drum.

Ian Froeb
Brazil's supporters cheered so fervently that it shook the camera!
Nothing more needs to be said about vuvuzelas, really, but one of the horn's (many) flaws is that it doesn't lend itself to rhythm. It's just that steady cicada drone. At Coco Louco, the fans beat a rhythm that followed the flow of the game, building as Brazil tried to mount an attack, erupting as a ball went high above the goal post.

Shouts in Portuguese sounded throughout the restaurant's bar area. I don't speak the language, but references to Portugal megastar Cristiano Ronaldo and the word puta were clear enough.

Ian Froeb
No yellow card for the impressive brunch buffet!
By halftime, an impressive brunch buffet was ready: chicken, several different bean dishes, fruit, hardboiled egg, bacon and more. Coffee appeared to be the beverage of choice, though at least a couple Bud Lights were served. Cachaça, the famous (or infamous, depending on your personal experience) liquor fermented from sugar cane, didn't make an appearance.

The whistle, tambourines and drum returned for the second half, though as the minutes waned and a stout Portuguese defense withstood the Brazilian attack, the rhythm wasn't quite as consistent.

The whistle performed a final flourish as the referee blew his own whistle to end the game. There were few shouts of exasperation, but the mood remained upbeat.

And why not? Given Brazil's immense talent, the Coco Louco crowd will likely have several more opportunities to celebrate.