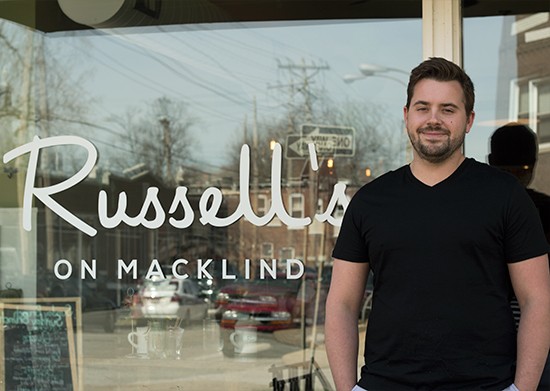 Ping grew up in a family that loves to cook, so he regularly found himself in the kitchen, watching his folks and experimenting with recipes. He always knew he would have a life in the culinary field -- Ping started work in the service industry in his early teens then went to culinary school to pursue his passion.

He was inspired to take the leap into opening his own place so early on in his career by his father, a small-business owner who instilled his entrepreneurial spirit in the budding chef. The gamble paid off -- in addition to the flagship bakery in Fenton, Ping runs the successful neighborhood restaurant Russell's on Macklind (5400 Murdoch Avenue; 314-553-9994) in the burgeoning SoHa neighborhood of south city.

Ping took a break from making his scrumptious gooey butter cake (a dish he hesitantly admits that he didn't like until he created a shortbread-crusted version) to share his thoughts on the St. Louis restaurant scene, the ingredient he likes to sneak into everything and his Sunday night tradition.

What is one thing people don't know about you that you wish they did? I wear a lot of hats, which is true for any chef or restaurant owner. Most people do not realize that the chefs and owners of smaller restaurants have to cover a lot of bases. In a given day you can get pulled from your food routine to be head of HR, CFO, delivery driver, counselor, company lawyer, groundskeeper, plumber...that one is fun! This is all just something that you sign up for when you decide to get into the business. It keeps life interesting. I am lucky to have an amazing staff to help keep it all moving when I get pulled away.

What daily ritual is non-negotiable for you? Our kitchen is buzzing almost 24 hours [a day], from baking at 4 a.m. to dinner service. I have learned over the last few years to try to take a selfish hour out of each day. This normally includes swimming laps, running or some sort of exercise in the afternoon. I take the time to either completely forget about my day or concentrate on one thing to accomplish when I get back into work.

If you could have any superpower, what would it be? To slow down time. We could get so much more done! Flying would be fun too.

What is the most positive trend in food, wine or cocktails that you've noticed in St. Louis over the past year? I'm excited about what is going on in the more casual restaurants around town. People are taking the ideals and food knowledge of higher-end kitchens and heightening the foods that we all crave. The accessibility of all of the neighborhood restaurants, bake shops and food stores is great, too.

Who is your St. Louis food crush? My wife expedites at [Russell's on] Macklind on the weekends...Hi, Em.

Who's the one person to watch right now in the St. Louis dining scene? Not really a particular person, but I think that the Southampton neighborhood and Macklind is an area to watch. With the addition of Grapeseed and soon-to-open Copper Pig, things are going to boom down here. I also have amazing people working on my team that will be sure to make a splash when they branch out, and I will be extremely proud. I'm not naming any names yet because for now they are mine!

Which ingredient is most representative of your personality? Everyone in the kitchen here would probably say rosemary. They joke that I like to sneak it into everything. I would say butter. It plays well with sweet and savory.

If someone asked you to describe the current state of St. Louis' culinary climate, what would you say? I think that the food and beverage industry in St. Louis is becoming more and more accessible in a great way. We are all becoming more knowledgeable about our individual craft, and the smaller guys are getting a lot of attention. Mix that with St. Louis' Midwestern hospitality, and you have a community of people that want to grow together and continue to improve. There is no room for big egos in that mix, which is great.

What is your after-work hangout? If the weather is nice, it is home on our front stoop with Em; our dogs, Muggins and Butler; and wine.

What's your food or beverage guilty pleasure? Food: Reduced fat Cheez-Its. They are crunchier than the regular. Beverage: Old Crow. We keep it in the kitchen at Macklind for cooking. It has become a staff tradition to take a shot at the end of the shift on Sunday to celebrate the end of a good week.

What would be your last meal on earth? Cheese, good sourdough bread and a big-ass glass of wine on the beach by my grandma's house in La Jolla, California.