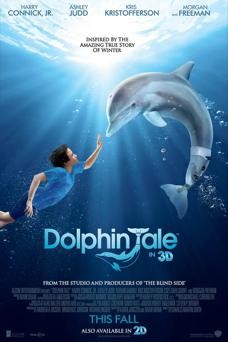 Go ahead. Try to remember the last animal movie you saw that didn't end with the poor creature's death.
We'll wait.

Dolphin Tale is inspired by the true story of Winter, a bottlenose dolphin who lost her tail. She actually stars as herself. No snuff here. But there's plenty of fluff.

The story focuses briefly on the run-in with a crab trap that led to Winter's tail being amputated. But, really, the movie is about the fictional characters: Sawyer (Nathan Gamble), the eleven-year-old would-be emo kid who's portrayed as Winter's rescuer/reason for wanting to live. His friend Hazel (Cozi Zuehlsdorff) happens to work with the animals at Clearwater Marine Aquarium (Winter's real home) with her marine biologist father, Clay (Harry Connick Jr.).

Both children come from lonely, single-parent homes, and Sawyer's beloved cousin has recently deployed to one of the wars. When his cousin returns with a bum leg, Sawyer hangs around the VA hospital, which is filled with young soldiers with prosthetic limbs who do an inordinate amount of cheering. Gearhead Sawyer gets inspired and talks to the hospital's quirky prosthesis specialist, Dr. Cameron McCarthy (Morgan Freeman), about designing a new tail for Winter, who is at risk of possibly lethal spinal damage from her adapted way of swimming.

We know Dr. McCarthy is quirky because he eats nothing but chili burgers and insists on calling Winter a fish. Still he manages, with the help of eleven-year-olds with lots of freckles and astute commands of physics, to design a life-saving prosthetic tail. And they all lived happily ever after.

Winter's real story is interesting enough without adding clichés, like the dolphin responding only to the boy who happened to be present at her rescue. It's a disservice to the people who were a part of the real story. Never mind that every kid who sees Dolphin Tale is going to leave the theater thinking this is reality.

Even more problematic is the film's war subplot. It's a gross oversimplification and uses the veterans to manipulate viewers' emotions. Young soldiers who've lost limbs live joyfully in the VA hospital, bouncing on basketball courts with their new limbs, always smiling. A little technology is all it takes to overcome the horrors of the battlefield. Just like all it takes to fix Sawyer's cousin, obviously in the depths of post-traumatic stress disorder, is his little cousin's love. It's just that simple, right?

There's never been a fish story that was based in honesty. Which is a shame, because the reality of Winter's rescue and recovery and her positive effect on disabled children would have made a fine movie without all the faux melodrama. The best part of the film came during the credits, when real footage of Winter's rescue and rehabilitation was shown with an unfortunately schlocky soundtrack.

The desecration of Winter's story made us want to eat all the creatures at the aquarium. Since we're landlocked, we settled for an all-you-can-eat Friday fish fry.