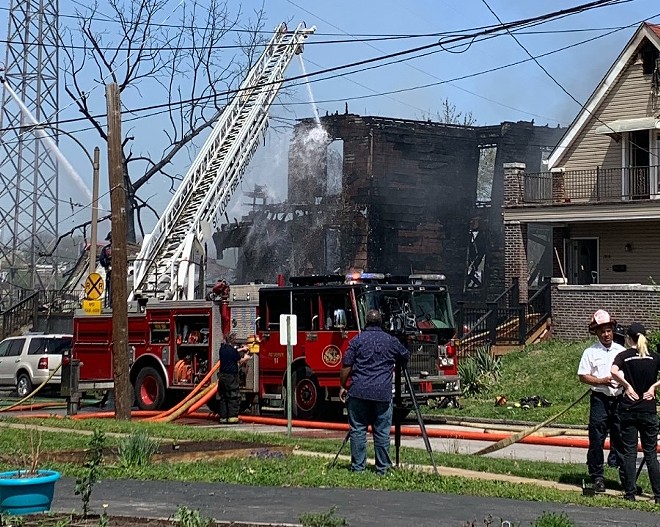 The St. Louis restaurant industry is banding together to support three of its own following a Saturday afternoon fire that tore through three homes in the city's Ellendale neighborhood. Of the three houses involved in the blaze, one was owned by Harrison Massie, general manager of the popular south city bar Small Change (2800 Indiana Avenue). Massie lived at the house with his wife, Sandra Manzoni and their friend, Eli Chang. Manzoni is also an employee of Small Change, while Chang works for the bar's sister concept, Planter's House.

According to KMOV, which first reported the news, the fire broke out at approximately 1 p.m., beginning in one home and spreading to two others; one of the houses was vacant, one was occupied by Massie, Manzoni and Chang, and the other was occupied by an unidentified man. Both of the occupied homes were completely destroyed.

The Riverfront Times has reached out to the St. Louis Metropolitan Police Department for additional details.

Jamie Kilgore, co-owner of Planter's House and Small Change, confirms the reported account. In an interview with the Riverfront Times, Kilgore says that it was Massie's house that caught fire first, though the cause of the blaze is unknown. She is unclear where Massie was at the time the fire started but says that Manzoni was in the shower and got out when she smelled smoke. Both escaped without physical injuries. Chang was out for a run at the time and arrived on the scene as his housemates were escaping. Kilgore also notes that the friends have several rescue cats that are currently missing. It is unclear whether or not they were able to escape through a door left propped open by Manzoni and Massie as they were fleeing the building. 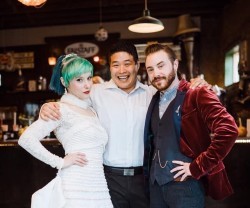 Courtesy of Jamie Kilgore
Sandra Manzoni, Eli Chang, and Harrison Massie at Manzoni and Massie's wedding.
A GoFundMe has been set up for Chang, Manzoni and Massie by their former coworker and friend Nicki Ball. As Kilgore explains, not only did the three lose their home and all of their belongings; when the house collapsed, it did so onto two of their cars.

"They've lost everything," Kilgore says. "Harrison and Sandra were able to grab their phones — I think Eli lost his but has been able to get one from somebody — but other than that they have nothing, including their vehicles. They have no clothes, no computers, no personal effects; it's all gone."

Kilgore says that there has been an outpouring of support for Chang, Manzoni and Massie with everyone who reaches out asking how they can help. She says that the three currently have places to stay and that their close friends and coworkers have banded together to provide clothing and food for them. She points people to the GoFundMe as the best way to support the three and says that there will be a fundraiser for them at Small Change sometime in the near future. Right now, it's just too soon to figure out details, as everyone is still trying to process this tragedy.

"They are all just wonderful people," Kilgore says. "It's just so sad and unbelievable that this happened."

This is a developing story. We will update as more information becomes available.