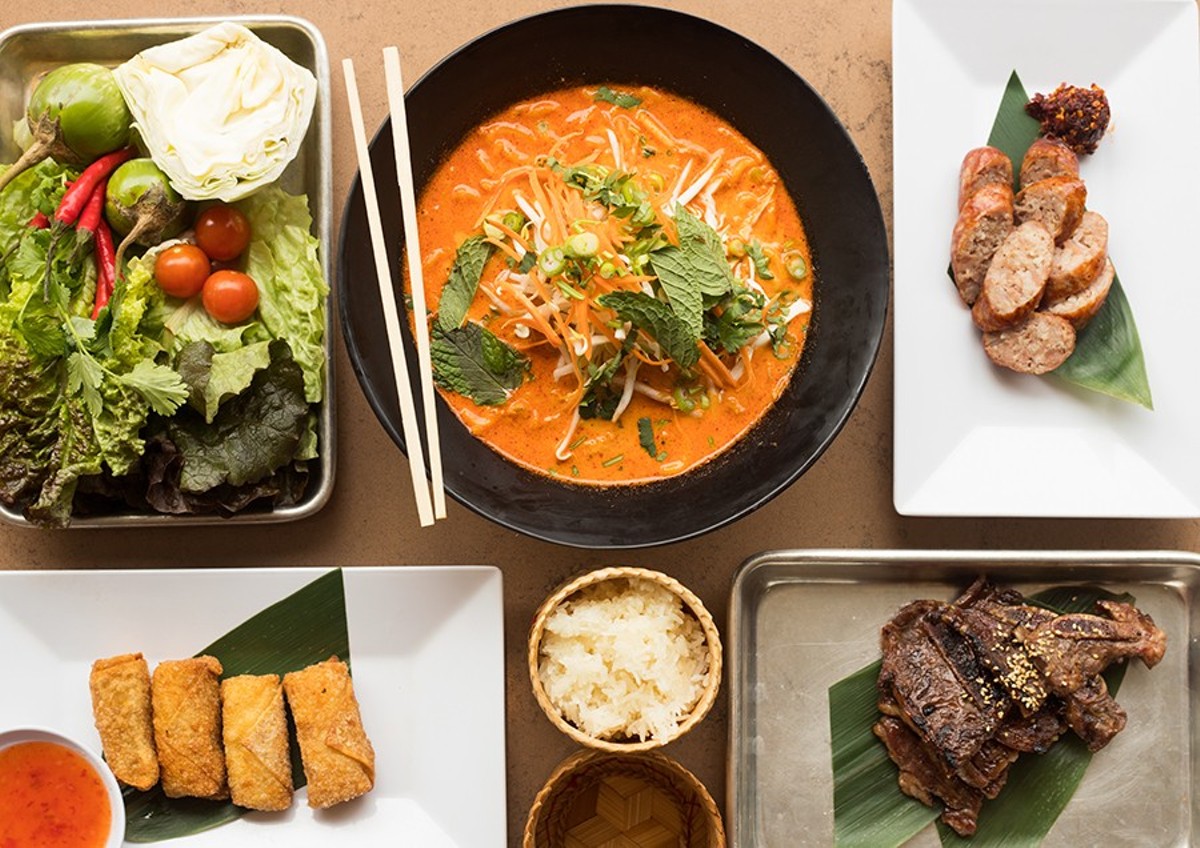 Growing up in Murfreesboro, Tennessee, Thom Chantharasy always looked forward to birthdays. It wasn't because he wanted presents or cake; he didn't care if the celebration was in his honor or someone else's. He just knew that birthdays meant food — special-occasion Laotian food only served when there was a party.

Fortunately for Chantharasy, these celebrations were a regular occurrence. Though he and his family were Laotians living in the middle of Tennessee, they were surrounded by fellow refugees who had fled the war in their homeland. They formed a close-knit community that looked forward to any opportunity to eat communally. At these near-weekly fêtes, bowls of simmering broth and noodles were doled out to all in attendance, and tables of meat, seafood, vegetables and condiments were laid out so that each person could customize soups to their liking. There was almost a quest for bragging rights, as partygoers would tweak their concoctions and show off the intricate flavor combinations they were able to create.

When he became a father, Chantharasy understood even more clearly how much those childhood experiences helped him connect with his culture. He wished the same for his own kids. However, now that he lived in St. Louis, away from the bigger community, he found that the opportunities to do so were limited. Outside of his own kitchen, there was no Laotian cuisine in St. Louis — not just for his kids to experience, but for the broader community as well. He knew there was only one way to change this: He had to do it himself.

Han Lao, the restaurant born out of Chantharasy's desire to bring Laotian food to St. Louis, is a concept he'd been toying with for quite some time. Even before he opened Robata, his wildly popular Japanese restaurant in Maplewood, Chantharasy had a vision for an authentic Laotian restaurant. However, he decided that Japanese food would not only be better received but easier to execute. After all, he'd been cooking it for the last twenty years, ever since he'd stumbled into the kitchen roughly two decades ago as a part-time gig during college. He had even helped run a handful of Japanese eateries (a few concepts in Memphis and Sekisui in St. Louis). It seemed like the right move at the time.

MABEL SUEN
The restaurant is located in Brentwood.

The success of Robata, which opened in the fall of 2015, gave Chantharasy both the confidence and financial footing to finally pursue his Laotian restaurant dreams. After searching the city and county for the right spot — and recruiting his seasoned restaurant-veteran sister, Barbara, to help him run the new place — Chantharasy opened Han Lao last November in a brand-new, but tucked-away, strip-mall storefront just off South Hanley Road.

The restaurant is not far from Home Depot and the new commercial developments that have sprung up nearby in recent years. However, unlike the chain restaurants that fill the neighboring plazas, Han Lao is imbued with style. Sleek and modern, the light-filled space is outfitted with white leather booths and tall communal wooden tables with stone tops. A wall of windows makes up one side of the restaurant; the open kitchen and adjacent bar take up the other. In addition to the dining room seating, guests can choose to eat at one of the barstools and watch the cooks in action from a front-row vantage point. 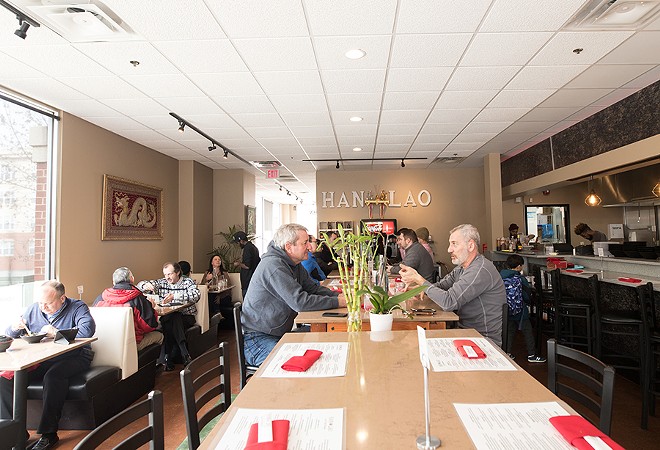 MABEL SUEN
The space looks nothing like its chain restaurant neighbors.

To find Han Lao, you'll have to drive past a Buffalo Wild Wings, trying your best to hold back tears for the spice-seekers who stopped one storefront too soon. Even the hottest wing sauce being doled out at the neighboring wing spot pales in comparison to the Laotian restaurant's fiery flavors.

Thum muk huong, a traditional papaya salad, is bracingly hot, electrified with red chiles and lime. There's an umami undercurrent of fish sauce and shrimp paste, but the salad is so surface-of-the-sun hot it's barely noticeable. A backbeat of citrus and the bright green papaya made it bearable, almost pleasurable. Even as my tongue was on fire, I could not refrain from going back for more, bite after painful bite.

Han Lao's other appetizers offer a reprieve from the spice (don't fret; it returns on the entrees). Starters include light-as-air shrimp chips, imbued with a subtle sea flavor, and blue crab Rangoon, which reimagines the ubiquitous Chinese takeout staple as an elegant finger food. Rich crab (yes, real crab) is enveloped in silken cream cheese, then folded into a wonton wrapper fashioned into the shape of an egg roll. The sweet, shellfish-infused goo becomes a rich liquid after it's fried, a pleasurable experience that will make you order a second round before the first one is finished.

If the crab Rangoon offers the luxurious richness of hot cream cheese, the Lao sausages provide the fatty indulgence of pure pork. Chantharasy gets the texture just right on these beauties; the outside casing is so delicate that, when cooked, it crisps up and glistens like chicken skin fresh out of the fryer. Inside, the meat and fat are coarsely ground, almost falling apart as you bite into them.

MABEL SUEN
Lao sausage comes with a side of spicy chile paste.

Crispy ribs also benefit from such perfection of texture. The meat, kissed with sweet soy and garlic, falls off the bone, revealing an under-layer of fat and a top coating of caramelized pork and glaze, the result of Chantharasy double-cooking the ribs. It's a transformative touch.

You'll find excellent versions of the sort of staples you'd see on menus at Thai restaurants (the countries share a substantial north-south border), including a delightfully funky and peanut-heavy pad Thai and a rendition of pad see ew that is decidedly less sweet than others around town.

Both are perfectly good choices, but if you want to see Chantharasy's range with traditional Laotian cuisine, your best bet is to order the soups and curries. Like the papaya salad and its masochistic pleasures, the red curry is a simmering, sinus-clearing bowl of heat. I requested shrimp in place of the default chicken and was mesmerized by the plump, tender shellfish after they soaked up mouthwatering chile flavor from the curry broth. Yellow curry, served with chicken, is gentler up front, but its spice is cumulative; about four bites into the creamy coconut concoction, every part of your mouth is warm and tingling.

Han Lao is not only about spice, however. One of the restaurant's most delightful dishes is the khao piak sen, a chicken-broth-based soup brimming with housemade rice noodles the thickness of a fat fettuccini, fresh herbs, pulled chicken and fried garlic. The subtle flavor is like that of a delicate chicken soup, but the rich texture is positively silken. I can't think of a better antidote to the chilling temperatures of this seemingly endless winter.

The chicken soup may remind you of something your mom would have made when you were feeling under the weather, but Chantharasy gets that nostalgic feeling when he eats a different soup: the khao poon. When he thinks back on those celebratory gatherings of his youth, this is the dish that stands out most vividly in his mind. It's easy to see why. Red curry and coconut milk provide spicy decadence to deeply savory pork broth. Together, the three components create a hearty heat that coats the mouth, especially on the back palate. Pieces of ground pork, assorted vegetables and fresh herbs bob with vermicelli noodles. Unlike at those family gatherings, Chantharasy serves this vibrant soup already dolled up to his specifications.

It would probably bring Chantharasy a spark of joy if you asked for additional herbs and condiments to make it your own, but why bother? This, like basically everything about Han Lao, is perfect just the way it is. And you don't need to wait for your birthday to realize it. Food this good should be celebrated every day.