How to Turn Your Vomit Into Food Art 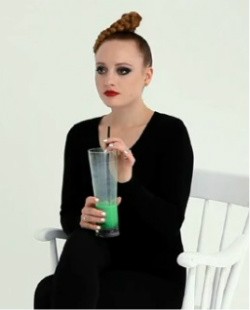 This is Millie Brown. All signs suggest that she is thoroughly modern: We're not sure if she makes an actual living from her work, but Millie is an artist by trade. Although the title of her piece, "Nexus Vomitus," should have clued us in pretty early, we still pressed play on that video, only to discover that her art is uncomfortably similar to the projectile vomit scene in The Exorcist.

OK, so she wears five-inch heels while intentionally ralphing in front of opera singers, and that little girl just had some demon issues going on. What the two have in common is the vibrant, startling colors of the stuff they're hurling. Because this is a food blog, and because we are all about providing a service to you, the reader, Gut Check has compiled a list of the five foods that will give you the most bang for your upchuck. Proceed at your own risk.

5. Pea soup Let's face it: No one actually likes peas. We seriously doubt even The Black Eyed Peas like their own variety. What better way to rebel against your years of daycare and that terrible "Peas and Carrots" song than by hurling the suspect vegetables as far from your body as your mouth can manage? Gut Check even considered adding carrots to the mix, but the goal here is purity of color, not severity of hatred.

4. Slurpees This one is so easy it's almost a cop-out. But that's what makes it brilliant. Depending on how detail-oriented your artwork is and how much you are influenced by Andy Warhol, you could require any number of colors that occur in the rainbow but not in food reproduced outside of the Willy Wonka factory. If your palate includes colors named after fruit that cannot actually produce them, look no further than your nearest gas station. Back-up plan: You could always mix a Kool-Aid pouch with some yogurt, but that sounds less than appetizing.

Katie Moulton
Nate Hereford's Pea Soup is far too tasty to waste, but would sure make some pretty puke.

3. Beets Because the key here seems to be rapid ingestion rather than careful digestion, we're comfortable recommending that you eat raw beets. The deep, rich purple of the root veggie is a tough one to duplicate. Ancient Phoenicians used to grind up snails to get it, and we're only recommending that you throw some beets into your blender. 2. Banana pudding Because there should be something on this list that is actually worth eating, we're going to go with banana pudding. Millie Brown's foods include a lot of colors that don't occur naturally in food, and unless you plan on ingesting the dry cheese packet out of a Kraft Mac 'n Cheese box, we suggest you keep away from dyes of any sort. That being said, you might need to add some whole bananas to your stomach to enhance the shade of yellow you require. 1. Spaghetti This one is the most open: If you would prefer a meatball sub, eggplant Parmesan or any other variety of commercialized Italian food, the decision is up to you. The goal, though, is red: You get the opacity from the texture of your carb of choice, and you get the color from the sauce. If you're really into ketchup, that could also work, but thinking about how much of the condiment is required to create a decent amount of red paint makes us want to well, throw up.