It's the little things, and Filomena's Italian Kitchen gets them right 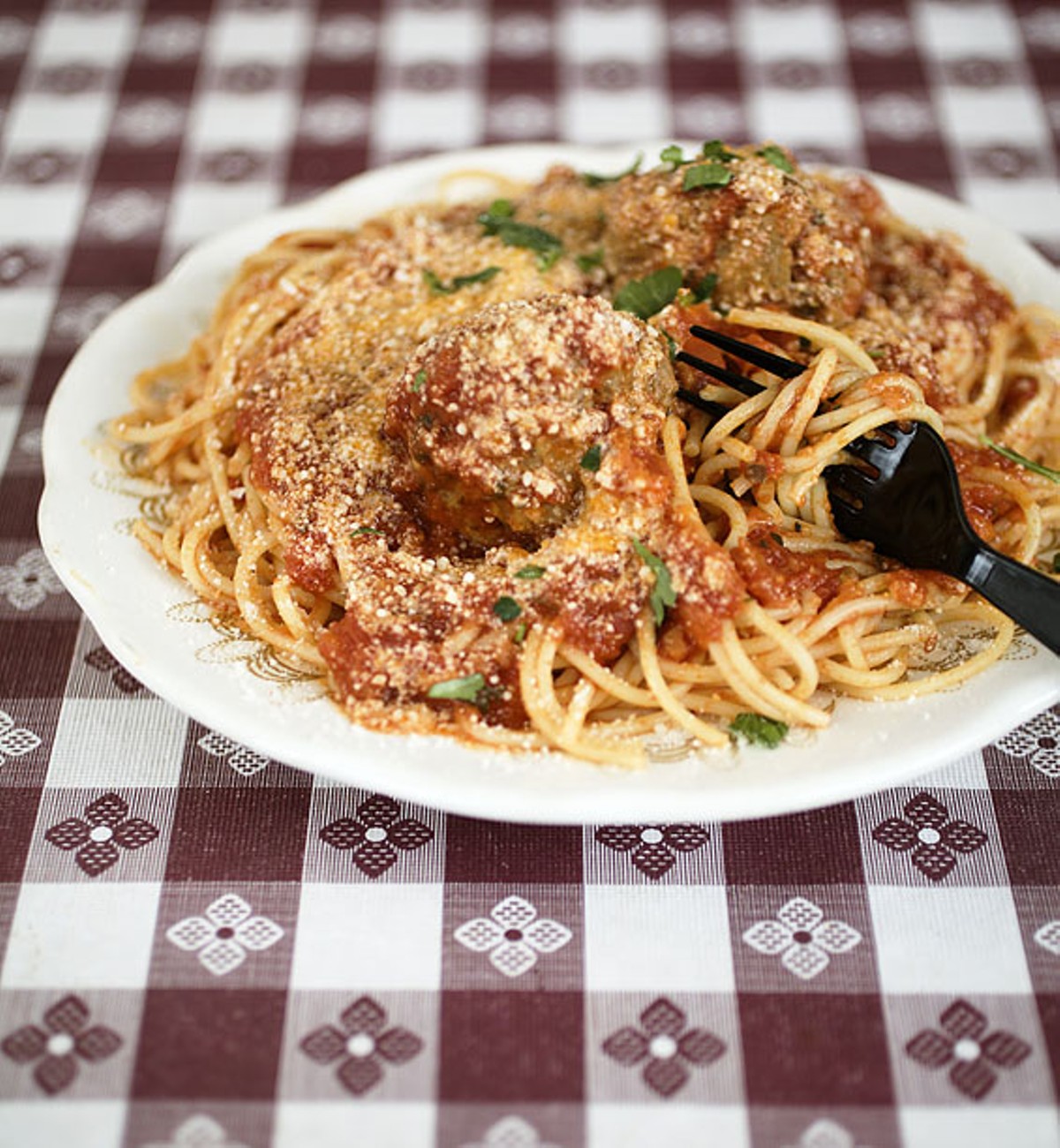 It's the little things, and Filomena's Italian Kitchen gets them right

I was halfway home from Filomena's Italian Kitchen when my cell phone rang. Traffic was snarled as all of St. Louis rushed home ahead of the impending snowpocalypse, so I answered it. It was the woman who had taken my carryout order at the restaurant, apologizing because she'd forgotten to include my pasta salad. This was no big deal — the pasta salad cost $3.50, an afterthought to my main order — but she was sincere in her regret, sounding less like a restaurant employee making a courtesy call than a mother realizing that you headed back to college without your care package and the freshly baked toll-house cookies within.

Of course, few restaurants would have bothered to call in the first place. This is the sort of small, thoughtful gesture that you remember, and it goes a long way toward describing the appeal of this four-month-old Glendale restaurant.

Filomena's occupies a former Wolf Camera shop on Manchester Road. The standalone structure is homely on the outside, but the interior is attractive, the walls painted pastel green and decorated with framed photographs of husband-and-wife owners Ken Dean and Filomena Angelucci-Dean and their family traveling in Italy. The format is something like fast-casual: You order at the counter. Whether you choose to eat at one of the dining tables or take your order home, each dish is served in a to-go container. (Also in the fast-casual vein, there is no beer or wine, though the restaurant charges no corkage fee if you bring your own.)

The menu is small: appetizers, soups and salads, basic pasta dishes (penne or spaghetti with meat or marinara sauce), sandwiches and precisely four entrées. Angelucci-Dean grew up in Castel Frentano, in Italy's Abruzzo region, but Filomena's menu is rooted in the broad, popular tradition of Italian food in America. And yes, there is also St. Louis Italian — specifically, there are toasted ravioli, as good as any in town, the crunch of the breaded exterior yielding to that unique granular meat filling.

Another appetizer, the arancini, might be the best dish here. The crisp exterior, flash-fried to a golden brown, gives way to risotto, which then gives way to a molten cheese core. The flavor is light, a touch creamy, a touch tangy. A dab of marinara sauce served on the side adds a bright, slightly garlicky accent. Get used to that marinara, by the way: It is the go-to sauce here, dressing everything from lasagna to meatballs. The latter, available as an appetizer, in a sandwich or atop your pasta, are dense specimens that make up in rich beef flavor what they lack in subtle seasoning.

Of the entrées I liked the lasagna the best. The serving is a generous slab, but the piece itself is a model of restraint. No single ingredient — sauce, meat, cheese — overwhelms the whole, and the noodles are thinner, and thus less obtrusive, than the usual broad, floppy example. The sauce is the aforementioned marinara, its sharper side rounded out by the one-two punch of gently spicy ground beef and sausage. The blend of mozzarella, Parmesan and provolone cheeses possesses an ideal texture, melted without being goopy, and adds lightly nutty, smoky notes.

Chicken Parmigiano benefits from this same blend of cheeses (and, again, that marinara sauce). The chicken is a boneless, skinless breast, breaded and sautéed, then finished in the oven. On the side is a small serving of good risotto, perfectly al dente, the flavor of chicken broth spiked with something exotic, almost like a hint of saffron. This same risotto accompanies the remaining two entrées, chicken marsala and beef Genovese. As is probably apparent by now, Filomena's relies on a lot of mixing-and-matching to fill out its menu.

The chicken marsala is an impressive rendering of what has become a fairly pedestrian dish. There is no great secret here, simply a boneless, skinless chicken breast sautéed with mushrooms and shallots in a marsala wine sauce. The sauce is sweet but not overly so, the flavor softened with a little butter and given a welcome complexity by the shallots. (Anthony Bourdain once quipped that the difference between home and restaurant cooks is that the latter group uses shallots. While he might have been overstating the matter, it is remarkable how the addition of even a few tablespoons of chopped shallots can elevate a dish.)

The most ambitious entrée, relatively speaking, is the beef Genovese: slices of beef — the cut isn't specified, only that it is "lean" — seared and then slow-roasted with vegetables in red wine. The flavor is reminiscent of a good pot roast: beef with hints of onion, carrot and celery. Where the dish falters somewhat is in its texture. Lean meat doesn't take as well to roasting as fattier cuts do. Without that fat rendered, the beef flavor isn't as succulent as you'd like, the texture not as tender.

Based on their appearances elsewhere on the menu, I would recommend the meatball and chicken Parmigiano sandwiches. I also tried two other sandwiches, the "Abruzzo" and the "Filomena's Special." The former stuffs prosciutto, provolone and roasted red peppers inside crusty bread. The combination works OK (though if you ask me, prosciutto doesn't need to be paired with anything), but relative to the size of the bread roll, the filling is stingy, its flavors lost. "Filomena's Special" is a straight-up cold-cut sandwich: beef, ham, Genoa salami and provolone with lettuce, tomato, onion and (a little too much) mayo.

It is to Filomena's credit that a combination of prosciutto, provolone and red peppers is the most daring entry on its menu. Like several other restaurants that I've reviewed in the past couple of years — not coincidentally contemporaneous with the rotten economy — it seeks to provide the convenience diners usually associate with cheap fast food with a touch of the satisfaction of a home-cooked meal.

In my case, complete with the fretting phone call from Mom.

If you do order the pasta salad, make sure you have it before you go. Bow-tie pasta tossed with artichoke hearts, red onion and black olives in a balsamic vinaigrette — it is really quite good.