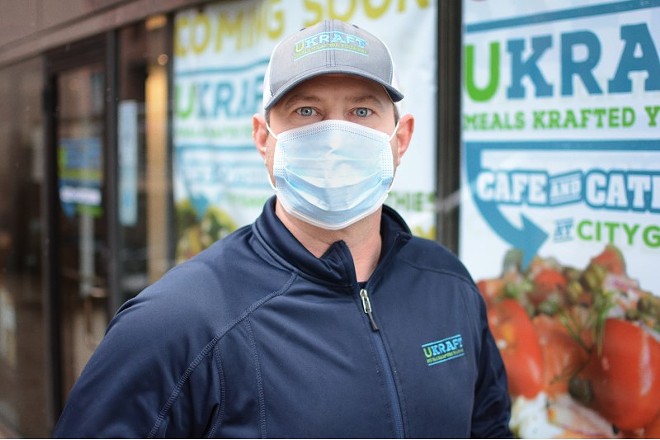 
Since opening the first brick and mortar location of UKRAFT (multiple locations including 8182 Maryland Avenue, Suite 100, Clayton; 314-571-9196) in Clayton's Regions Centre office building a year and a half ago, Matt Ratz has gotten to know the people in the building. More than regulars, they became acquaintances, even friends, so it wasn't hard for him to pick up on the angst they felt last February and early March. It was an ominous signal that things were going to get bad.

"This building is corporate America central, with Merrill Lynch, Stifel Nicolaus, the Regions Bank training facility, so we had a front-row seat to everything that was happening," Ratz says. "That first week of March when the stock markets fell, you should've seen people's faces. We saw the before shock, and then we watched thousands of people pack their offices and leave. It hit us like a bolt of lightning."

Ratz could have never expected anything that would rise to the level of upheaval he, his business partner and brother Mike, and the hospitality industry at large has experienced since the COVID-19 pandemic began nearly a year ago. Back then, he and his brother had nothing but excitement for the future as they watched the food truck they started in 2018 grow into a successful business — something Ratz had dreamed of since leaving behind the bar business for the fast-casual restaurant sector in 2011.

Their brand was built on the idea that people should be able to get the meals they want, in accordance with whatever dietary needs they have, and the Ratzes found success in appealing to everyone from keto followers to vegetarians to the gluten-free crowd — so much success that they were able to put down roots in the Regions Centre office building only a little over a year after launching their brand.

That all changed in March, when their captive audience of office workers left the building. Like most people, Ratz assumed the lockdowns would last a month or two, and that business at the restaurant would return to normal, even if the food truck would continue to suffer longer-term effects. Like everyone in the industry, they quickly found out that there was nothing about this they could predict.

"We didn't know what we were going to do about the food truck, because mass gatherings were out, so we threw in the towel for that," Ratz says. "Then, more information and data started coming out about outdoor [dining being safer], and all of these subdivisions starting hosting food trucks. Our friend has us out to his, and the next thing we knew we were booked 30 days straight. The community really rallied around food truck and small business owners."

The support he's seen from the community has given Ratz the hope to push forward — not just with the food truck and Clayton location, but with a brand new location downtown that opened on January 16. As Ratz explains, he and his brother had been looking for a location downtown, and when one became available last summer, they jumped on the opportunity. Though he admits it might be crazy to open a new business during a pandemic, he believes that he and his team have to look to the future and what will hopefully be brighter days — not just for the restaurant industry, but for everyone.

"I do think that our country really rallies around each other in times like this," Ratz says. "I think that what's going to happen is as soon as the pandemic lets up we will have this massive turnaround in restaurants and sports and everything, because people really miss going out. I think you will see a huge renaissance when all of this settles down."

Ratz took a break from getting the downtown UKRAFT up and running to share his thoughts on what it's like being in the restaurant industry during such challenging times, what he misses most about business as usual, and what gives him hope that things will eventually get better.

What is one thing people don’t know about you that you wish they did?
I donated a kidney to my sister 21 years ago.

What daily ritual is non-negotiable for you?
Working out.

Who is your St. Louis food crush?
I have so many. Our food scene is incredible. JJ Twig's double-decker pizza, a sandwich from Mom's Deli and Ted Drewes.

Which ingredient is most representative of your personality?
Hot sauce. You never know what the outcome will be. I tend to be a risk-taker — a calculated one, I must add. There are so many good chefs in town; the hot sauce is a calculated risk.

If you weren’t working in the restaurant business, what would you be doing?
Coaching baseball.

As a hospitality professional, what do people need to know about what you are going through?
I am glad they don’t know. It is probably worse then they realize. It has been a year all of us will never forget. I always try to spin a positive, though, and I hope we will all became much stronger when normalcy returns.

What do you miss most about the way you did your job before COVID-19?
Everything. Just knowing what to expect and be able to forecast. We literally have had to take this deal hour by hour. I’m sure my staff has had some frustration, but I always try to explain the why on everything.

What do you miss least?
I honestly would take everything back before COVID. I miss everything. It made me appreciative of what our industry was.

What is one thing that gives you hope during this crisis?
The community’s support. It has been amazing. This city has shown an incredible amount of selflessness and support with the local and takeout/curbside movement.