MoKaBe's to be Featured in Documentary by Liza Birkenmeier 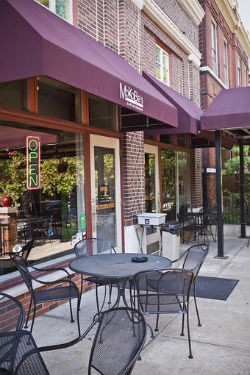 Laura Ann Miller
MoKaBe's is ready for its close-up.

Even though she's currently earning a Masters in Dramatic Writing at Carnagie Mellon University in Pittsburgh, St. Louisan Liza Birkenmeier has returned home for her current project - a documentary on MoKaBe's Coffeehouse (3606 Arsenal Street; 314-865-2009).

Birkenmeier answered some questions via email for Gut Check, explaining the inspiration for her project and why MoKaBe's is not just a coffeehouse, but a home.

Gut Check What prompted you to choose MoKaBe's as the subject of your documentary?

Liza Birkenmeier I have been going to MoKaBe's Coffeehouse since the end of my undergraduate time at Washington University. I would sit upstairs - a hermit at work - and became more and more fascinated with the culture at the counter downstairs and the people who worked behind it. Eventually it became a home to me, a place where I could feel in good company, regardless of what I was working on or going through. It was the place where I became comfortable with and empowered by my own queer identity, and though I grew up in St. Louis, it was the first time that I felt a sense of belonging in the city itself.

Eventually, my entire world was connected to that place. The non-homogeneity of the clientele and the people who'd become so dear to me provided an amazingly textured, safe, exciting, and bizarre life that I could have never imagined existed in the place I grew up.

I am now a graduate student at Carnegie Mellon University, where I am working toward an MFA in Dramatic Writing under playwright Rob Handel. The human intersections visible in my work in the program were incredibly connected to the people that I knew from MoKaBe's. I was fixated on telling the myriad of stories that I'd collected in my moments there. Eventually, it became clear that fictional representation of this truly one-of-a-kind place (and home to so many), was not enough of a testament. In lieu of working on a screenplay competition at school this coming year, I asked my professors if I could develop this project in St. Louis, and approach storytelling in a different way by creating a documentary. Tell us a bit about what you're doing with the film.

The instigating question was "What makes MoKaBe's Coffeehouse different from anywhere else?" The footage that I've gotten so far includes interviews with regulars and employees. I've also been taking the camera around when I'm out in the city with friends, most of whom I know from MoKaBe's. I'm catching moments of dinner parties, City Garden, bars, dancing -- putting a microscope on the lives of people who are dear to me and part of the community of MoKaBe's while they're not serving or ordering coffee. I'm eager to talk to anyone and everyone about experiences as MoKaBe's, life-changing or ordinary.

Right now, it seems to me that MoKaBe's is the backdrop to a specific culture. I get more and more excited about the micro-examination of life in this city at this time. Everything from the language to gesture to livelihood of the regulars is shedding light on what, to me, was the mystery of this seemingly Middle-American street corner. As I explore the stories of this place, I feel more and more open to what the final product could look like. I don't know how I will narrow down this wide frame to its most specific journeys, patterns, and secrets, but I remain incredibly excited about chipping away at the indelible impact of MoKaBe's on its community.

How far along are you with the filming process? When will we be able to see it, and where?

I have been filming for two weeks, and will be here for most of the summer, catching what I can of the coffeehouse and its surroundings. The film will be fully edited and ready for presentation in the spring of 2012. I'd love arrange to have a showing at or near MoKaBe's before any future plans are made. You can keep an eye on the progress of the film at This is a Movie About. It's a wacky blog that tracks the inspirations and journey of the process--still very new!

For you, what role has MoKaBe's played in your life, beyond the basic cafe role of food and drink?

Aside from embracing my own queer identity and finding myself in a network of fascinating people and experiences, I have found my place and identity as a native of St. Louis. For me, as well as for everyone that I've spoken with thus far, the first word that comes to mind to describe MoKaBe's is home. Beyond the delicious grilled veggie and spicy black bean burger and variety of coffee options, it is a place where I hear news from the night before, meet people at the counter, disclose my personal hang-ups, and soak up all the advice I can from the incredible people and dear friends who work behind the counter.

Coffee! Black.The MoKaBe's brunch is the best thing to do on a Sunday. Seriously the world's best meal. Vegan, vegetarian, varied. And meat for those who eat it.