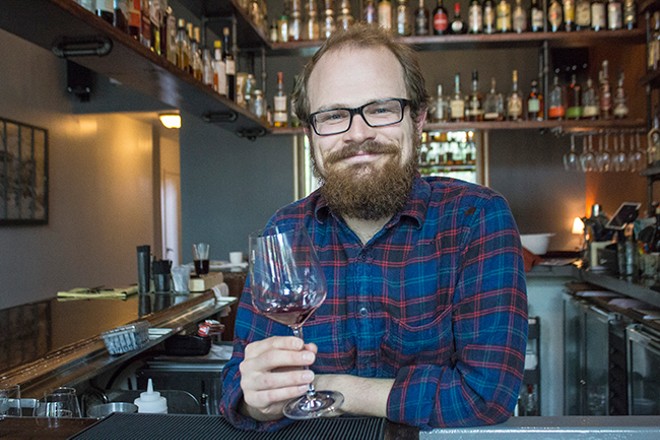 Sara Bannoura
Travis Hebrank leads the bar at Polite Society.
Travis Hebrank of Polite Society (1923 Park Avenue, 314-325-2553) was on the brink of law school graduation, set to follow in the footsteps of his father and sister, who are both attorneys, when he made an abrupt change of course.

"I was good at it, but I knew I never had a passion for it," Hebrank says of becoming a lawyer. "I think a lot of people don't realize their passion until it is too late, and I figured that it was the best time to make a stupid mistake, if that's what this was going to become. So I broached the subject of not becoming a lawyer. My parents reacted as well as they could have."

Mom and Dad may not have been immediately thrilled with Hebrank's decision, but they certainly saw it coming — and maybe even bore some responsibility for his subsequent turn to the hospitality industry. Hailing from southern Illinois, the Hebrank family made it a priority to dine out together regularly at some of the area's better restaurants. The experience instilled in Hebrank a precocious appreciation for gastronomy that would sometimes become the butt of his family's jokes.

"When I was five or six, my grandma gave me a taste of escargot, thinking I'd think it was disgusting. I loved it," Hebrank recalls. "When I was eight or nine, I remember going to a country club in Edwardsville with my mom, dad and a friend of mine. It's been told how funny it was that my friend ordered a hot dog and I ordered escargot."

Hebrank gravitated toward wine when he was in high school and into college, but he didn't get his first restaurant job until he was a second-year law student at Saint Louis University. While dining with his family at Scape in the Central West End, Hebrank discovered that he knew one of the restaurant's managers, and later emailed her about a job. Though he was initially hired on as a server assistant, he quickly rose through the ranks, gaining the management's trust as he asked for additional responsibilities with the wine list.

Eventually, Hebrank was promoted to management and became Scape's wine buyer, where he continued to develop his knowledge of wine and spirits and seek out interesting bottles. Not long after his promotion, Jonathan Schoen started as the general manager, and he and Hebrank connected over a shared vision of hospitality. When Schoen left to develop what would become Polite Society, he had no doubt that Hebrank should run the restaurant's bar program.

These days, Hebrank is busy tending bar at the Lafayette Square hotspot, serving thoughtful drinks and interesting glass pours to thirsty patrons. But it's not lost on him just how close he was to working at a different kind of bar — one his parents made him pursue even as he insisted that the restaurant industry was his calling. "They still told me I should take the bar and finish school or otherwise it would be a waste," Hebrank says. "I agreed with them and passed it, but to their credit, they saw in me that I knew what I was talking about and how rare it is for someone to really like something and to get an opportunity to make money doing it."

Hebrank took a break from Polite Society's bar to share his thoughts on the St. Louis restaurant industry, the virtues of x-ray vision and why a little bit of effort can make life so much better.

What is one thing people don’t know about you that you wish they did?
I only seem like a horribly abrasive person because I’m a bad actor.

What daily ritual is non-negotiable for you?
I usually shower. Usually. Routine isn’t my thing.

If you could have any superpower, what would it be?
X-ray vision. For… science.

What is the most positive trend in food, beer, wine or cocktails that you’ve noticed in St. Louis over the past year?
Effort. People are learning more. And learning is a good thing on its own, but it’s also pretty cool when people learn to make their lives better. You have to have heard of black cardamom to be able to use it. And it’s not something that comes up in everyday conversation. If you don’t dig deep, you can miss out on some amazing things, and your food or art or whatever will be that much more boring because you didn’t put in the effort to find those new ingredients or techniques.

What is one thing missing or that you’d like to see in the local food and beverage scene?
Late night. In Dublin, you could get a doner kebab at any time of day. In New York, you can get hot dogs or pizza or anything really. Here it’s fast food.

Who is your St. Louis food or drink crush?
I think the cocktail program at Retreat is phenomenal: Tim, good work buddy. Mikey, your food is OK too, I guess… Piss off, Grant. I think Reeds is awesome — food, beverage, and people: Alisha, Andre, Zac et al. And one that I feel gets WAY too little recognition is Elliot Harris at BaiKu Sushi Lounge, the best sushi chef in town. Most people just put fish on rice, maybe some chives on their mackerel. Elliot always has something new for me to try. You can tell he cares. man. I also have to mention Little Saigon in the Central West End. It may be the most hospitable and solidly consistent restaurant in the city. (This is not an exclusive list.)

Which ingredient is most representative of your personality?
Gin, because at heart, I am bland and uninteresting, but I am dressed up with herbs and spices and Christmas tree smell.

If someone asked you to describe the current state of St. Louis’ food and beverage climate, what would you say?
St. Louis has a great food scene. We are in the middle of the country, and I believe it’s true that fads and trends reach us later than they do on the coasts, but they are often well-refined by the time they get here. While restaurants in larger cities often have to seek extremes to garner attention, restaurants in St. Louis are able to focus on a quality guest experience, rather than striving for a simply "memorable" experience. “Newness” is important, but it should never be made so important so as to lose sight of the main goal: a delicious and comfortable meal.

If you were not tending bar, what would you be doing?
I guess I’d be a lawyer, or something … put that schooling to work. I can’t be an astronaut; they don’t allow four-eyed assholes into rockets — at least in the US.

Name an ingredient never allowed behind your bar.
Human. I’m adventurous but… you shouldn’t eat humans. Although...

What is your after work hangout?
Usually my couch. My cat, Federica, yells at me until I feed her. Then I eat a little too. We cuddle. That’s about it. I work too much to go get trashed at Mangia.

What’s your edible or quaffable guilty pleasure?
I am a firm believer in ketchup. Chefs always make a stink about ketchup. They’re wrong. It’s sweet and salt and vinegar and tomato-umami. “But it’s boring!” So is water, but you still use that, ya crackpot. I don’t (often) eat ketchup on its own — that’s not what it’s for. It’s a condiment. And the king of them. If I had to choose between a well prepared béarnaise or ketchup for the rest of my life, I would choose ketchup.