Review: Arzola's Fajitas + Margaritas Is the Spice of Life

The Benton Park restaurant, from the legendary Arzola family, dishes up an outstanding Tex-Mex experience.

The steak fajitas at Arzola's Fajitas + Margaritas (2730 McNair Avenue, 314-226-9672) are less a dish and more of a religious experience — a notion that strikes you the moment you are presented with this meat miracle, that is then underscored when chef Tanya Key explains how she achieves such complete and utter perfection. The secret, she says, begins with the cut, a flap steak that has the perfect balance of robust, beefy flavor and generous fat content. Her cooking technique, however, is what pushes the dish over the edge. Key marinates the meat for 72 hours, then cooks the thin slices of steak over heated lava rocks; the fat ends up melting into the meat, then drizzling down on the rocks so that it bastes the meat from the bottom while adding a smoky flavor. The result of her process is a stunning masterpiece — both charred and juicy, thin but not overcooked — that looks not like strips of meat but gilded petals that have gently fallen onto the plate from a steak flower.

It should come as no surprise that Arzola's has perfected the fajita form. Though the restaurant has only been open since May of this year, it traces its roots back some 40 years to Austin, Texas, where patriarch Eddie Arzola got his start grilling meat on a pushcart in the city's bustling entertainment district. The experience made Arzola realize just how much he loved the food business, so when he moved to St. Louis in 1986 to be near his wife's family, it was natural he'd gravitate toward the restaurant industry. In 1989, he opened Chuy's Arzola in Dogtown, which became one of the area's most beloved Tex-Mex restaurants for nearly two decades. 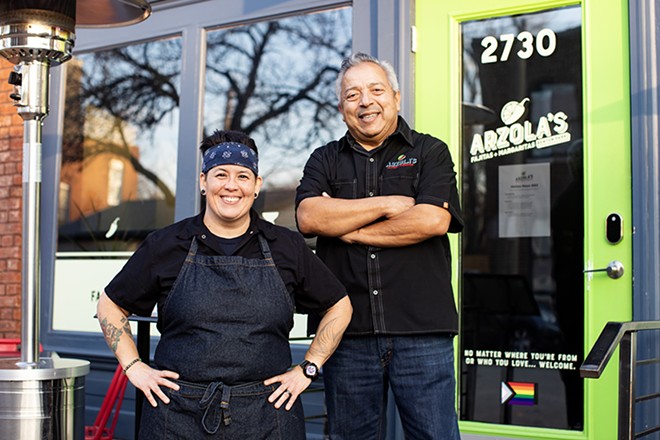 Arzola closed Chuy's in 2008, and though he thought he was done with the restaurant business, he found himself pulled back on a couple of occasions: first to help his son, Coby, at the restaurant Agave and next at a brief revival of Chuy's in Midtown. After that latter endeavor, Arzola was sure he'd served his last guests, but he was again convinced to return last year when Coby and his husband, Derek Fatheree, took over the former Ernesto's Wine Bar in Benton Park. The pair, who live in the neighborhood, believed that the area needed a solid Mexican restaurant, so they enlisted Arzola to help them create a place that would combine Chuy's legendary food with Agave's elevated approach and excellent drinks.

The three partners, together with chef Key, have succeeded tremendously in carrying out their vision. They are packed into such a tiny space — Arzola's consists of a 950-square-foot dining room and bar, plus a back patio — that you wonder how they are able to contain so much warm hospitality and culinary perfection between its four walls. The place can get packed; tables are close, and there is likely to be a line out the front door of folks angling for valuable dining-room real estate. However, the moment Arzola greets you with his earnest, welcoming demeanor, you are instantly put at ease.

Arzola likes to say he is in the people business and that he just happens to serve them fine food. While there is no question the service at this outstanding restaurant is top-notch, I would keep coming back for more even if my server threw the fajitas in my lap and told me to go to hell. But it's not only the beef version that dazzles; the Mojo shrimp version is positively outstanding, consisting of massive, flawlessly cooked shellfish that have been marinated in earthy adobo and roasted garlic. Snappy, tender and shockingly fresh, the shrimp make you wonder if you are not sitting at a seafood shack on the Sea of Cortez rather than in a south St. Louis storefront.

Mabel Suen
The steak fajitas are perfection of the form.

Quesadillas, too, set the standard of the form. The Luna — filled with meat so juicy and char-kissed you wonder if you've ever had properly grilled bird before in your life — is a stunning example of what a chicken quesadilla can be. The meat is smashed between two seasoned tortillas with seasoned black beans, molten cheese and pico de gallo; it's a simple list of ingredients, but each is prepared with the utmost care. A veggie version, the Tapatia, is equally stunning. Here, the tortillas are stuffed with roasted sweet potatoes, cauliflower, Brussels sprouts and molten cheese, which make for a deeply satisfying vegetarian dish.

Arzola's burritos benefit from this uncompromising approach. The San Miguel pairs massive hunks of the restaurant's excellent grilled chicken with spicy escabeche, achiote-seasoned rice, gooey cheese, smashed black beans and red-chili sauce. However, Key doesn't stop there; the burrito is pressed on a griddle, giving the seasoned flour tortilla a wonderfully crisp, flaky texture that provides a pleasant contrast between the exterior and gooey interior. A steak version, the Arroyo, uses the same complementary ingredients but pairs them with the restaurant's mind-blowing fajita meat.

While you'd be forgiven for jumping straight into Arzola's outstanding main courses, the restaurant offers several appetizers that are no less wonderful. Classic queso, which the menu notes calls the "sauce of life," is a luxuriously cheesy concoction, flecked with spicy pico de gallo that makes your mouth tingle. The guacamole offers a refreshing counter to the heat; the avocado mash, interspersed with garlic, poblano, onion, jalapeño and a generous dose of lime juice, is positively fluffy in texture. 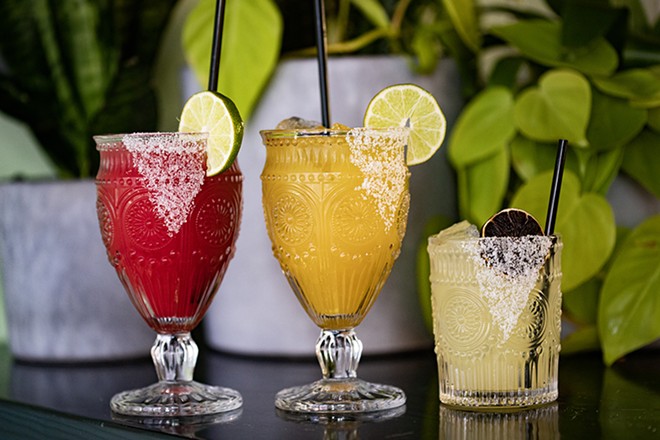 Mabel Suen
A selection of margaritas.

The tostadas are revelatory. Here, crunchy corn tostadas are slathered with guacamole, then topped with diced shrimp and grilled pineapple pico de gallo and tossed in a mouthwatering, slightly sweet red-chili sauce. It's a bright, fruity and spicy mélange that is like fireworks on the palate. The frijoles locos, on the other hand, is a warm, savory dish of rich comfort. For this warm, loaded bean dip, Key takes bacon and chorizo-infused beans, smothers them in velvety queso, crema, pico de gallo and cilantro. The result is a dish that is part chili, part bean dip and one of the most deeply satisfying things you will eat all year.

Washing this down with one of Arzola's margaritas, made with freshly squeezed juice, of course, you can't help but marvel at how truly exceptional a Tex-Mex spot can be when placed in the hands of passionate people who are masters of their craft. Those fajitas alone will make you rethink all others that came before them — though when you're eating something this magnificent, you won't be thinking much of anything except how lucky you are to be alive.