Mabel Suen
CC's Vegan Spot will transform your idea of what plant-based cuisine can be.

One Saturday in February, a couple walked into CC's Vegan Spot — but they were no regular customers.

Like many guests who frequent Trezel Brown's south St. Louis plant-based eatery, the pair had seen her posts on social media and decided to give the restaurant a try. But they were not just coming from down the road. The husband and wife had driven all the way from Kentucky for the sole purpose of dining at CC's — and they weren't the only ones to cross state lines for a taste of Brown's cooking.

A few weeks before they came in, a group from Wisconsin made their way to Brown's spot on the corner of Loughborough and Macklind, preceded only a few weeks prior by a pair from California, who made a significant detour while on a cross-country trip to try out this bastion of vegan cuisine.

The thought of having to pack a lunch to enjoy one might seem like an odd concept, but when you see how much passion Brown puts into presenting vegan food in a new, exciting light, it makes sense. 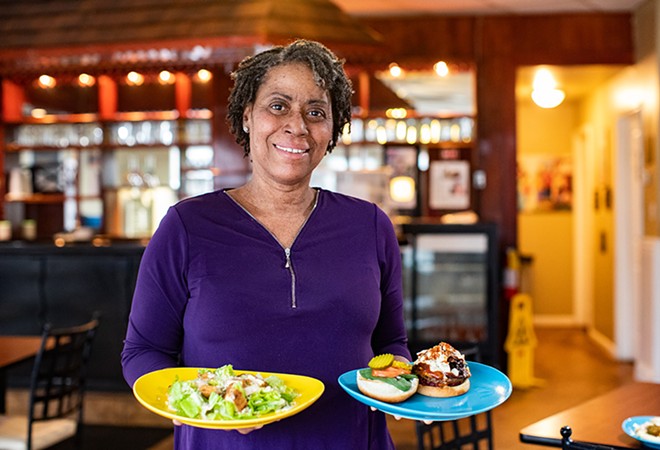 A longtime home cook who always showed her love for family and friends through the dishes she prepared for them, Brown was determined to transfer that energy into plant-based cooking when a host of health issues prompted her to transition to a vegan diet about seven years ago.

Though Brown enjoyed showing off her burgeoning vegan cooking skills to her loved ones, she never planned on fashioning a restaurant around them. Instead, she focused on her home daycare business and eventually was able to go back to school, where she pursued degrees in psychology and criminal justice. She assumed she'd find her career path in those fields. But after a trip to her hometown of Harlem in New York led her to her favorite childhood Italian-ice spot, she felt compelled to bring the beloved treat to the Midwest. In 2019, she realized that dream, opening CC's Icees Galore in her neighborhood of Alton, Illinois.

Brown envisioned CC's as strictly an Italian-ice spot, but, with the encouragement of her daughters, she began offering daily specials to show off her plant-based cooking skills. In no time, she had garnered a reputation for her impressive vegan offerings, bringing in customers from far and wide for what she deems "vegan soul food." Her following became so robust that she outgrew her original, 600-square-foot space and opened a larger location not far from the original. The extra room allowed her to go all-in on a plant-based menu — and she expanded her offerings and enjoyed cooking for her legions of fans who expressed their awe at her ability to imbue vegan cuisine with the rich, satisfying comfort typically reserved for meat-based dishes. 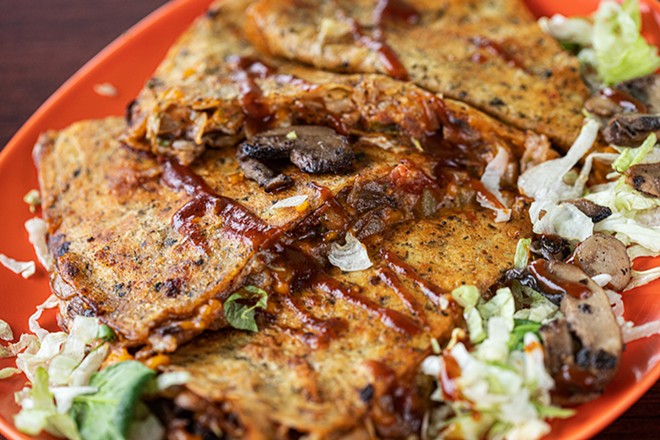 Now in a new location in Princeton Heights (Brown relocated in July 2021 to be closer to her customer base), CC's has solidified its role as a restaurant that pushes the limits of what plant-based cooking can be. Soulful, decadent and deeply comforting, Brown's cooking impresses not because it is great vegan food; it impresses because you are so dazzled you don't even concern yourself with such categories. Her Double Trouble Burger, for instance, is not a good beef alternative; it's an outrageously delicious burger, period. The mammoth sandwich consists of two different plant-based patties: an earthy, savory seasoned beet burger with a deeply smoky taste and a smoked eggplant patty enlivened with barbecue spices. The flavors meld beautifully together, but the mix of textures — hearty eggplant atop soft, smashed beets evocative of a delicate meatloaf — is particularly stunning.

Brown's Illy Cheesesteak is so rich and gooey you wonder how she is able to coax such textures from plant-based ingredients. Housemade seitan, juicy and the texture of slow-cooked pot roast, is stuffed into a soft hoagie roll, then doused with Brown's secret vegan cheese-sauce recipe that is as silken as molten Velveeta. Overstuffed and topped with grilled onions and peppers, it's pure decadence.

CC's mushroom quesadilla is a feat of engineering; massive and overstuffed with rich cheese sauce, grilled mushrooms, vegan bacon and sour cream, the contents are wrapped in a nutty tortilla as delicate as a crepe that Brown seasons with earthy spices. The buffalo chicken version is equally outstanding, filled with tender, plant-based chicken smothered in a mouthwatering nectar that's like a cross between honey-barbecue and tangy Louisiana hot sauce. Fiery jalapeños are studded throughout the dish, giving it extra heat that is mitigated by luscious sour cream.

Brown laughs that she got so carried away in making her Extreme Taco she didn't even stop to figure out how one could navigate fitting it into their mouth. A humongous shell, roughly a foot long and five inches wide, envelops its veggie and tofu contents in nutty-flavored crunch. More like an elongated taco salad with an edible shell bowl than a regular taco, the dish is so large Brown has to fashion three to-go materials — a box, foil and a bag — for those who order it for carryout. The size befits its huge taste. 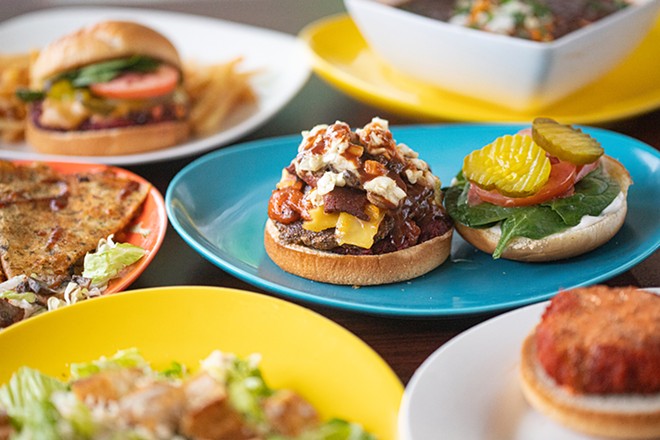 CC's Ish Bites shockingly evoke the comforting mild sea flavor of the fishstick of your childhood. That Brown is able to get those flavors from tofu and seasoning boggles the mind. Even the tartar sauce, though thinner than the dairy-based counterpart, hits that quintessential creamy, piquant pickle note. Buffalo cauliflower bites, too, offer the satisfaction of boneless buffalo wings; the plump, meaty vegetables are flawlessly cooked so that they are slightly softened but not flimsy, showcasing Brown's talent in consistently hitting the mark when it comes to texture.

Brown proves herself, over and over again, to be a magician of vegan cuisine, though she admits she's been close to giving up at many points over the past few years. From the pandemic, which decimated her business, to staffing issues, to a health crisis that shuttered the restaurant for two months this winter, she has often found herself close to calling it quits. But just when she gets to her lowest point, there is always something bringing her back from the brink. Whether that's a catering gig for Omarion, a grant from Discover, a feature in a national vegan publication or just a husband and wife traveling hours to taste her cooking, Brown is constantly reminded of how much her food means to people — and how much sharing her passion means to her. If that isn't soul food, what is?