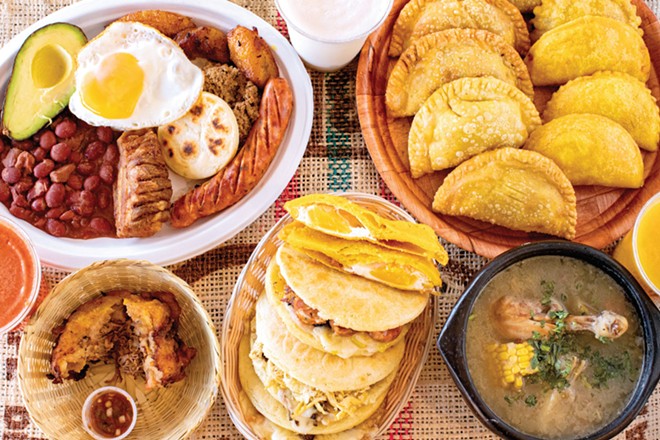 Claudia Marcella Niswonger knew her arepas would be a hit, even if some had wondered why she was preparing so many for her first-ever Hispanic festival in 2015. As she and her family had tirelessly prepped a variety of empanadas and arepas for her debut on the festival circuit, her family had wondered if the latter, which they figured were more obscure, would have an impact. Niswonger, however, knew they were wrong, an intuition that came true when they sold out early in the event, leaving the throngs of customers who came to her booth to exclaim in frustration, "What happened?"

When you taste Niswonger's arepas at her Brentwood brick and mortar, Maize & Wheat (1912 South Brentwood Boulevard, Brentwood; 314-749-4778), you understand her festival patrons' angst. Thick and fluffy like a pancake with a biscuit-like denseness, Niswonger's take on the traditional Colombian dish is revelatory. The large white corn discs are stuffed with molten mozzarella and shredded beef as succulent as pot roast soaked in its own drippings, giving the concoction the feel of a South American Philly cheesesteak.

Niswonger's culinary talent is undeniable, even if it lay latent for years. A computer programmer by trade, the Colombian native always had a knack for cooking that had been passed down by her mother, who spent her life working in the restaurant business before passing away at the age of 31. Niswonger used her knowledge as a home cook, but she never thought about getting into the professional kitchen.

That changed when her daughter drafted her into the food business. After moving to the U.S. 15 years ago, Niswonger found work as a nanny and eventually as the owner of her own cleaning company. She thought it would be fun to sell traditional Colombian crafts on the local Hispanic festival circuit, so she had her daughter contact the organizer, who wondered whether or not they knew anyone who could prepare Colombian food at the festivals. Without consulting her mom, Niswonger's daughter boldly exclaimed, "My mom can!" 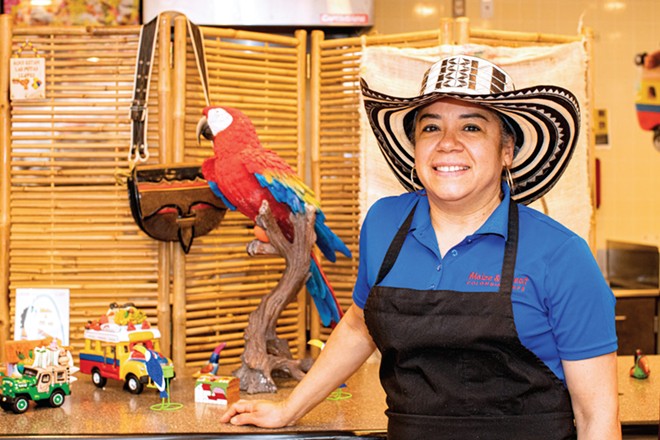 Niswonger accepted the challenge and was met with such instant success that she understood she had a great opportunity. Branding her business as El Fogón, she began participating in as many festivals as she could, gaining a devoted following that would razz her about not having a storefront for them to patronize at their leisure. She understood but felt content taking her time to make that happen.

In 2019, tragedy compelled her to finally follow that path when her son, who was by her side every step of the way at El Fogón, died unexpectedly. Grief stricken, she channeled her pain into making his dream of them opening a restaurant together a reality, vowing to honor his wish of not letting the loss destroy her. With his spirit as her guiding force, she secured a location in the former Dickey's BBQ on Brentwood Boulevard and opened her debut restaurant, Maize & Wheat, this past November.

In her permanent digs, Niswonger is able to offer even more than her famous arepas and empanadas — though both staple items are good enough to base an entire restaurant around. In addition to the shredded beef version, Niswonger offers the Especial, which pairs tender, pulled chicken with mushrooms and cheese, a strictly cheese varietal that is a contender for the area's best riff on a grilled cheese, and a traditional Colombiana, featuring maduros (caramelized cooked plantains), corn and slices of mild Colombian sausage. However, her piece de resistance is the simple egg arepa. Crisped up like two massive yellow cornmeal chips, the mouthwatering fritters are stuffed with an over-medium egg. It puts other breakfast sandwiches to shame. 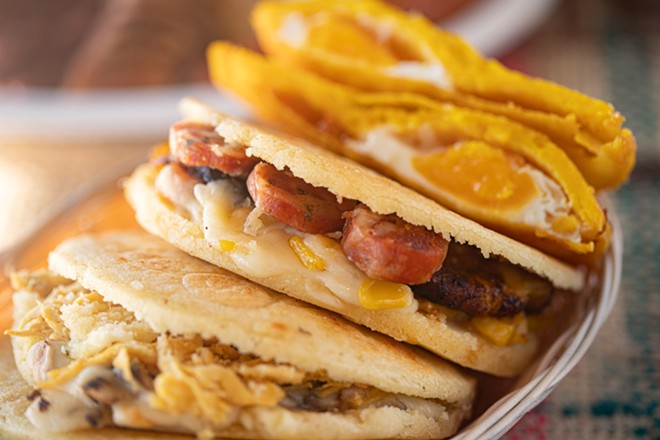 Mabel Suen
Arepas are available with a variety of fillings, such as a Colombian arepa with sausage, corn, yellow plantain and mozzarella.

The success of Niswonger's arepas does not take away from her empanadas, however. Offered in two different styles — with a flour shell (how she learned to make them) or a traditional corn one — these fried savory pies are an outstanding handheld meal. Similar to the arepas, the empanadas can be stuffed with fillings such as shredded beef, pulled chicken or an excellent vegetarian version that contains black beans, potatoes and corn. Both the flour and the corn shells are stunning — flaky as a pie crust but soft in places like an old-fashioned doughnut and accented with turmeric to give them a whisper of earth.

Dishes new to the brick-and-mortar restaurant include Colombian shrimp ceviche, a more decadent version of the citrus-cured style more often seen in town. Here, the plump, chilled shellfish are tossed in a decadent dressing that's like a combination of mayonnaise, ketchup, cocktail sauce and citrus. It's light enough that it serves as a luxurious condiment without covering up the taste of the shrimp. Another standout is the bandeja paisa, a mixed-grill platter of beans, rice, maduros, seasoned ground beef, Colombian sausage and pork belly that somehow manages to be crispy like a thick chicharron on one side and succulent and fatty as butter on the other. Your mind can hardly wrap itself around these glorious, opposite textures; the best thing to do is surrender. 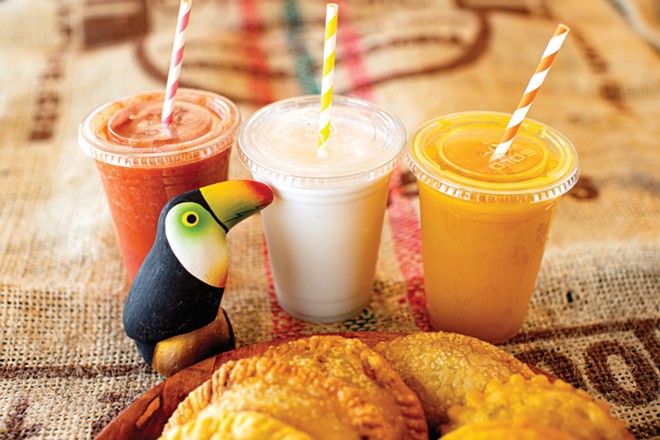 Mabel Suen
Juices are available in flavors such as guava, coconut lemonade and passion fruit.

If the bandeja paisa is a visit to an indulgent Colombian backyard barbecue, the ajiaco is a trip to Niswonger's childhood kitchen. One bite of this traditional chicken soup transports you to her mother's kitchen table — so simple, warm and comforting that you feel as if you can smell it simmering on her stovetop.

That soulful feeling is present in every last bite of Niswonger's cooking and underscores the passion she has for what she is doing. Even as she settles into her brick-and-mortar debut, she is already thinking of opportunities to expand her brand; there's a coffee shop in the works and a frozen-food line that she is already clearing out space in her overflow freezers to launch. This time around, no one will question whether she is making too much for her next new endeavor. Niswonger has shown that if she makes it, they will come.