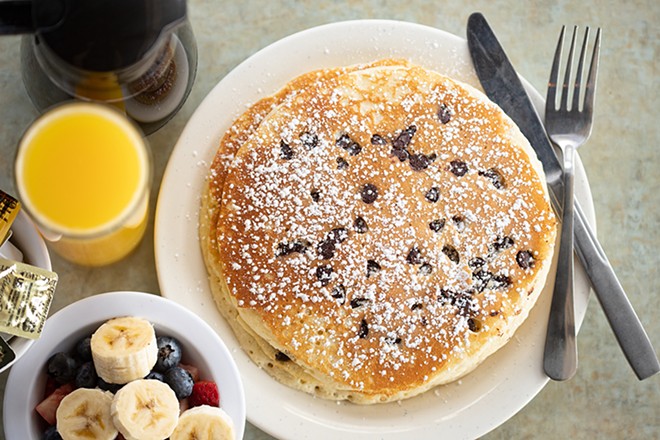 Besarta "Bessa" Asani sees it all the time: A guest will come into her Warson Woods restaurant, order a drink, then an appetizer, and linger for a bit. They'll select a main course next, followed by a few side dishes, another drink and eventually dessert. It's a scene you'd see at any fine-dining establishment. But not at a spot like Asani's.

Her currency is pancakes, bacon, turkey clubs and OJ — not the typical stuff of a multi-coursed feast, but an experience she's been happy to provide since opening the Silver Pancake House (9983 Manchester Road, Warson Woods; 314-858-9091) last November. As Asani sees it, the fact that diners are willing to treat their breakfast as a multi-coursed affair is proof that the neighborhood was starving for an earnest, straightforward daytime spot; in an area booming with restaurants and people with the disposable income to patronize them on the regular, it seemed like there should be such a place. And yet, there wasn't.

Asani was the perfect person to change that. An industry professional who tried her hardest to get out of the business, the Chicago native found herself pulled back in after her twin brother opened a breakfast-and-lunch spot, Golden Oak Pancake House, in Swansea, Illinois, a few years ago. It was an unexpected move, considering the two swore they would never get back into the restaurant business. Having spent most of their youth working in their father and grandfather's restaurants in Chicago, Asani and her brother made their escape after the family relocated to Edwardsville when they were in high school. There, they both fell in love with science and, following graduation, attended Southern Illinois University Edwardsville for biology and chemistry, determined to forge a path as far from the food business as they could get. 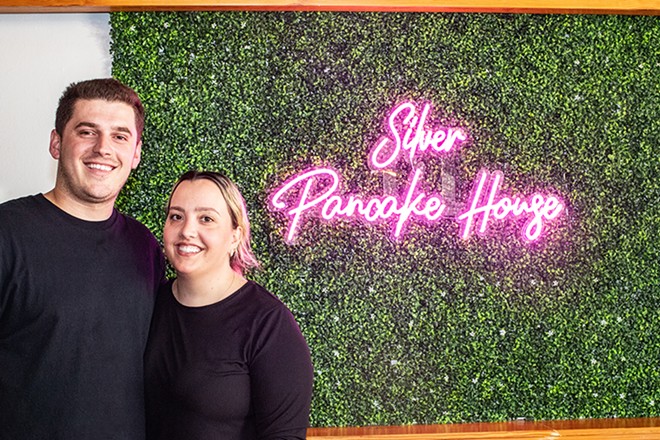 Mabel Suen
Husband and wife duo Bessi Agushi and Bessa Asani could not resist theca of the food business.

Asani's brother was the first to break, opening Golden Oak in 2019. At first, Asani resisted the pull, but when her twin opened a second location in Edwardsville, she saw how much he could benefit from her help and jumped back in. By the time there was talk of a third spot, she decided to take the lead.

Initially, the plan was to open a third Golden Oak in southern Illinois, but when their broker flagged the former Wasabi in Warson Woods, they quickly changed course. The neighborhood — filled with homes and lacking straightforward breakfast options — seemed like the perfect fit for their family-friendly brand, so she sealed the deal and opened last winter, determined to become a beloved part of the mid-county dining scene.

Asani has succeeded in that quest. On any given weekend (and a lot of weekdays, too), Silver Pancake House is packed with diners hungry for uncomplicated but well-executed fare. She is unapologetic about what she offers. Though it's not uncommon for her guests to treat breakfast as a chef's tasting menu, Asani is proud that she's not serving anything esoteric, fancy or inaccessible. There is nothing on this menu you wouldn't find at an IHOP or Denny's; what is different is that the food Silver Pancake House serves is high-quality, freshly made and prepared with the care you'd receive at an upscale restaurant. 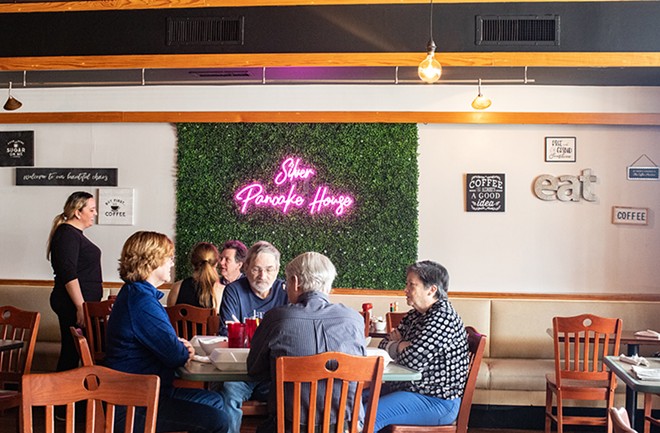 Mabel Suen
The bright, sunny dining room creates an inviting vibe.
You see how striking the difference between Silver Pancake House and chain breakfast spots is in everything it does. Biscuits and gravy, for instance, are the quintessential version of the form; the fluffy biscuits are smothered in black-peppery sausage gravy that hits that perfect velvety balance between too runny and too thick. That same glorious nectar garnishes a crispy, golden piece of country fried steak that is notable because of its tender texture and delicate, well-seasoned breading that remains crunchy even after it's doused in gravy.


That same care is shown on egg dishes. A simple cheese omelet has the telling waves and folds that point to great execution. Filled with a generous amount of gooey American cheese, it's difficult to figure out where it ends and the egg begins. Over-easy eggs — perfectly cooked so that the whites are not fully set — form a decadent sauce for the corned beef and potato-filled Irish skillet. The dish is equally noteworthy because of the quality of the corned beef. Unlike the typical canned mush, this is crispy, like little hunks of brisket bits, and interspersed with small slivers of golden potatoes.

The Spartan skillet is a stunning riff on eggs Florentine. Hash browns, tomatoes and spinach have a pleasant briny flavor thanks to a generous sprinkle of feta cheese. Similarly, jalapeños infuse the South of the Border breakfast burrito with fiery spice. The eggs, hash browns, mild breakfast sausage and cheese all soak up its piquant juice.


Silver Pancake House is known for its bagel sandwiches, a dish that seems pretty basic until you dig into the soft, toasty mélange of gooey cheese, over-medium eggs and thick bacon, perfectly pressed together like a panini. It's an excellent example of how the restaurant can turn a simple offering into something special by great execution. Even the ham steak — a modest breakfast-meat side offering — is given extra care; instead of buying a pre-cut product, Asani and her team buy a whole ham and thick-slice the steaks themselves. The result is a hearty piece of pork with subtle brown-sugar undertones that bring out the meat's natural sweetness.

The restaurant's namesake dish is exactly what you want in a diner pancake: golden, malty, slightly crispy around the edges and fluffy on the inside. Alone, they are good, but when mixed with molten chocolate chips, they become outstanding examples of the form. The pecan version, too, is a success; the nuts are folded into the batter so that each bite is infused with roast-y sweetness. The French toast, too, is a thing to behold. Instead of the thin, flaccid fare typically peddled as such, Silver Pancake's version is thick-sliced and as soft as bread pudding. The cinnamon-apple glazed version is particularly noteworthy thanks to the large hunks of tender fruit and cinnamon-sugar goo that adorns every inch of the toast and then some. It's as if someone opened up grandma's apple pie and dumped its entire contents onto this wonderful sweet bread.

With its abundance of decadent sweet treats and elevated breakfast staples, it's easy to see why customers come to Silver Pancake with a tasting-menu approach. How does one choose a dish when every option is so flawlessly executed? Thankfully, at this delightful gem, no one will judge you for ordering one of each.