Review: Social House II Has U. City in an Uproar. But What About the Food? 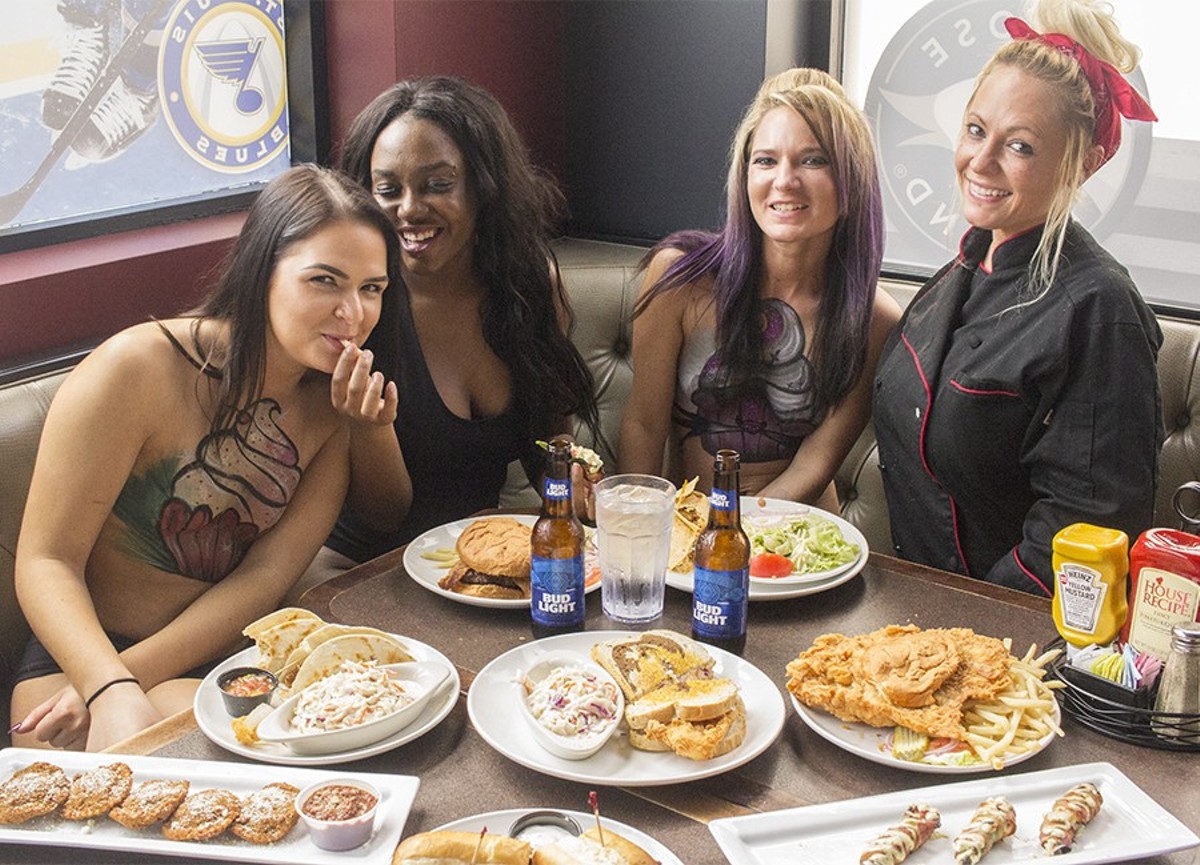 Executive Chef Tina Westcott (far right) with some of the servers of Social House II. PHOTO BY MABEL SUEN

Does the food matter at Social House II, the controversial body paint and pasty bar that opened in the Delmar Loop after a great deal of ruckus this March? Let's be honest — coming here for the culinary offerings is like reading Playboy for the articles. There's only one thing that the men who patronize the place want served at their table, and it has nothing to do with burgers and fries.

That's not how the folks behind Social House see it, however. "We're a sports bar and restaurant," a manager insisted when pressed about the concept. "The girls just happen to be a bonus."

Or so I thought before I stopped by for dinner. Let's be clear before I stun even myself by insisting that Social House II is a worthwhile food spot: This is not haute cuisine. It's wings and 'tater skins and nachos. But, surprisingly, it's wings and 'tater skins and nachos done pretty well. Add a bright, modern atmosphere and enough televisions to stock a Best Buy and, true enough, it's a darn fine sports bar.

The civic leaders of University City would surely be unhappy to hear it. Since declaring his intent to open a Delmar Loop spinoff of Soulard's Social House, owner John Racanelli fought an uphill battle against the municipal government, facing everything from restraining orders to temporary revocations of his liquor license. Racanelli enlisted the help of the reliably quotable attorney Albert Watkins to lead the charge in the fight to bring painted ladies to (what the University City Council deems) the "family-friendly" Loop. At least for now, they've succeeded.

One reason for that, legally, was Racanelli's insistence that the place is not a new business, but rather an update to his previous concept, the Market Pub House, which closed its doors after six years in the space this past January. He's right in the sense that the bones of the building remain the same. The lofted metal and glass atrium — a holdover from the restaurant's days as the old Market in the Loop — provides natural light to the space, and the large, three-sided wooden bar takes up roughly half of the real estate. The sports bar décor is gone, replaced with minimal decorations and faux tufted leather banquettes, and the windows have been rendered smoky to keep pre-teens on the street from catching a glimpse of body paint. Still, innumerable televisions give the sizable game-time crowd an unobstructed view from every angle, keeping the sports bar feel.

Not that you are looking at the televisions — unless you are awkwardly staring at them to avoid looking like a pervert. (The late-middle-aged attorneys who made up the entirety of the restaurant's brisk weekday lunch service had no problem making their intentions shamefully obvious.) The servers' uniforms leave little to the imagination. Bottoms are skimpier than what you'd find on the beach in Ipanema and tops are, well, not there.

But that visual needn't impede your enjoyment of some respectable bar and grill fare. I was surprised to learn that Social House II employs a female executive chef, Tina Westcott. She has been cooking in restaurants around the country since she was fifteen, including most recently at Soulard's Social House, though this is her first executive chef gig. Her menu has a lot in common with the one in Soulard, with a few specialties at each place.

That menu doesn't stray far from the sports bar playbook, but why should it? When you're at a pasty bar watching the game, all you really want are some good chicken wings. Here they are meaty, crisp and glazed in a mouth-puckering, mildly spicy "Social Sauce," which is like a cross between tangy mustard and Buffalo sauce.

Or maybe you want potato skins, hollowed out and deep fried to form the perfect vehicle for hunks of chicken, molten cheese and a drizzle of the same spicy "Social Sauce." This is buffalo chicken dip in a potato boat.

The "Shrooms" were not as dazzling. The humongous mushroom caps, filled with herbed cream cheese and battered, lacked flavor unless liberally dipped in the accompanying horseradish sauce. The bacon-wrapped stuffed jalapeños more than made up for this lapse, however. Vibrant green peppers, hollowed out and filled with cream cheese, are wrapped in bacon and baked. The result is an addictive mélange of spice, salt and richness that is so good, you won't care what your server is or isn't wearing.

Pizzas are touted as "Sicilian Style," so I was surprised when I was instead served a thin-crust, St. Louis-style pie (Sicilian style pizzas typically have a very thick, almost focaccia-like crust). In that spirit, the Margherita on offer is not a traditional Neapolitan Margherita, but rather a local interpretation. Oregano-spiked tomato sauce was generously spread atop a crisp, golden crust, along with fresh mozzarella cheese and a chiffonade of fresh basil. If you can get over the misnomer — and the desire to eat a real Margherita pizza — it's adequate.

The two steak sandwich offerings I tried were the restaurant's biggest misses. The prime rib sandwich was fatty, mushy and bland, while the beef tenderloin steak wrap had so many jalapeños it was overwhelmed with spice and drowned in jalapeño ranch dressing. When you could get a taste of actual steak, though, it was perfectly cooked, deliciously peppery and coated in char. Tone down the accouterments and this will be a fine sandwich.

I anticipated the "Grouper Reuben" to be a disaster and happily ate my words. A thick, lightly battered filet of mild white fish is topped with coleslaw, Swiss and 1000 Island dressing then served atop griddled marble rye. I've had too many riffs on the reuben to count — most typically ending in disappointment. This was a pleasant surprise.

The "Black and Bleu" burger, seasoned with Cajun spices and topped with blue cheese, was dry and underwhelming. The "Frisco Burger" redeemed this side of the menu with its buttery, griddled bread, well-seasoned beef and tangy 1000 Island dressing.

It was nothing compared to the lamb burger, however. The merguez seasoning gave the beautifully cooked meat a warm, Moroccan spice that was offset by tart, melted goat cheese. This alone would be worth a return visit.

I was equally impressed with the grilled chicken breast entrée, a dish that would be at home at any of the city's Italian restaurants. The herbed breadcrumb-coated chicken is pan fried, giving it a crisp exterior that coats the succulent meat. Artichoke hearts, tomatoes and a white wine lemon drizzle make this entrée a standout. Westcott says that she plans to offer more entrée specials. If this is a taste of what is to come, the restaurant has a bright future.

Unless, of course, it gets shut down, or its landlord makes good on his threat to terminate Racanelli's lease in March 2017, which is a distinct possibility. But even if Social House II is forced to cover its waitresses and tone down its image, it's still a damn good sports bar. In that case, it will matter what the food tastes like. And that's the one thing they have covered. 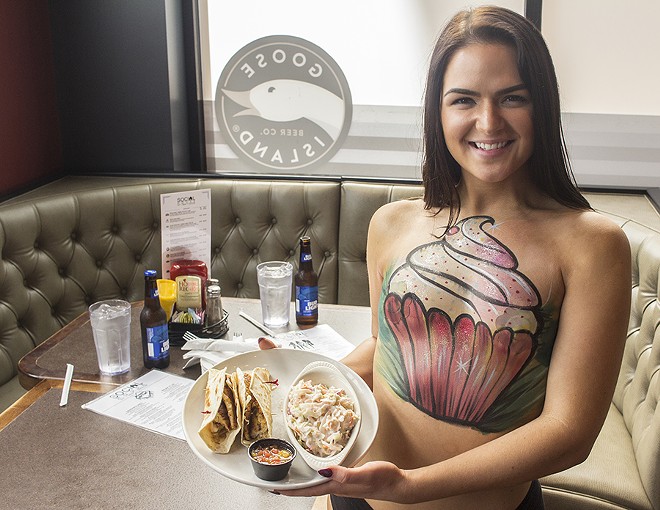 Turn the page for more photos of Social House II.