Slice Is Nice: With its brick oven, Pizzeria Tivoli is a welcome addition to Princeton Heights 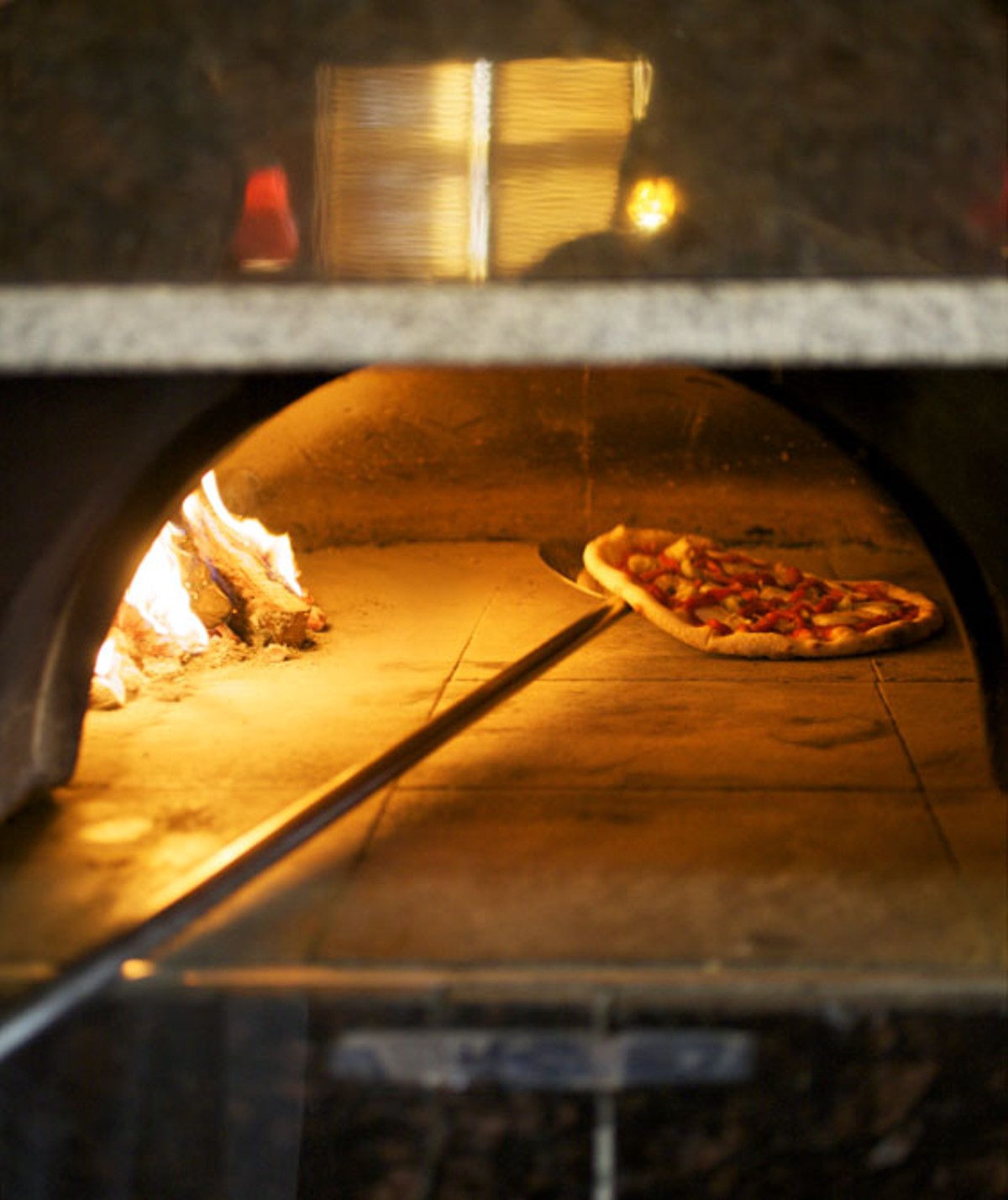 Slice Is Nice: With its brick oven, Pizzeria Tivoli is a welcome addition to Princeton Heights

It says something about the number and variety of pizzerias in St. Louis that Pizzeria Tivoli isn't the first place in town where I've eaten pizza with gyro meat on it. Still, the "Villa d'Este" pizza at this south-city restaurant is unique — in my experience, at least — in that it actually attempts to re-create the experience of eating a gyro.

The pizza sent into the restaurant's wood-fired brick oven is nothing more than dough topped with a sheen of olive oil and strips of gyro beef. After the bake, the pizzaiolo adds tomato, lettuce, red onion, feta and tzatziki sauce. The finished product approximates not only the flavor of a gyro but also its contrasting temperatures and textures. The biggest difference between the "Villa d'Este" and a gyro is the crust, which betrays more of a chew than the average piece of pita bread does; more crucially, it bears a very light char from the oven.

That oven is the heart of Pizzeria Tivoli, which opened last July, part of a glut of pizza restaurants to debut over the past year or so. Add that glut to an already crowded field, and it becomes difficult for any one new restaurant to stand out. Pizzeria Tivoli succeeds by focusing almost exclusively on pizza — fourteen different varieties. Otherwise, there are only a couple of appetizers (bruschetta, an antipasto platter), a few salads and a few desserts. There is, as best I can tell, only one cook, the pizzaiolo, stretching and twirling dough and sliding pies into and out of the oven on his peel and keeping up an amiable conversation with anyone seated near the small, open kitchen.

The restaurant itself is small, with seating for about 30 arranged in an L-shape around a bar, which itself accommodates not only the restaurant's beer taps and wine bottles but the oven and the pizzaiolo's station to boot. (The beer and wine lists are brief but pizza-friendly.) The décor is generically evocative of Southern Europe. It looks and feels like exactly what it is: a cozy neighborhood restaurant.

As I noted when I reviewed Peel Wood Fired Pizza in Edwardsville, Illinois, last month, this style of pizza is often synonymous with Neapolitan pizza. Fans of Neapolitan pizza will note that, at approximately 600 degrees, Pizzeria Tivoli's oven doesn't burn as hot as is customary. As a result, a pizza here takes a little longer to cook (about four minutes, by our server's estimation) than a Neapolitan pizza does, and its crust isn't quite as crisp. On its own merits — and nowhere does Pizzeria Tivoli claim to be authentically Neapolitan — the crust is fine, kissed by smoke from the burning wood.

The "Hadrian's" pizza is more or less typical of the most basic pizzas here, the crust topped with an unassuming tomato sauce applied with welcome restraint, splotches of still-bubbling fresh mozzarella and quarter-size slices of gently spiced sausage. The finished product isn't a game changer. It's just good pizza.

The "Quattro Formaggi" pie comes with a bit more of a swagger. Joining fresh mozzarella atop the crust and tomato sauce are three more cheeses: fontina, provolone and Parmesan. The provolone reinforces the crust's slight smokiness, while the fontina and Parmesan chime in with nutty undertones.

"Hadrian's" is the token sausage pizza, and there's a straightforward pepperoni pie, too, but for a more sophisticated take, the "Castel Madama" layers tissue-thin slices of prosciutto atop tomato sauce, fresh mozzarella and kalamata olives. As with most of the toppings on the "Villa d'Este" gyro pizza, the prosciutto is added after the bake so that it retains its silky texture and its natural saltiness isn't intensified by cooking.

The restaurant's namesake "Tivoli" pizza offers an assemblage of typical "higher-end" toppings: roasted red peppers, artichoke hearts and grilled chicken, along with tomato sauce and fresh mozzarella. The peppers and artichoke hearts work well together, but I found the chicken to be, well, chicken, lacking enough seasoning to differentiate itself.

Our server, to his credit, informed us that the salads were big enough for two to share. Indeed, without making a big deal out of it, he told us the best way for a couple to order here would be to split a salad, choose a pizza apiece — they are twelve inches in diameter — and, if we had room, share dessert. (He suggested tiramisu. We didn't have room.)

The server's guidance, unsolicited, ignored without consequence if we'd so wished, was one of the small touches — like how the "Villa d'Este" pizza was constructed — that set this restaurant apart. Yes, it's one more pizza joint, but it's the only Pizzeria Tivoli.