At Rock Star Tacos at the Gaslight, you can order a dish called the Poutina Turner. Medium-cut fries, kissed with the warm heat of Chef Wil Pelly's proprietary Rock Star Dust seasoning, are smothered in fiery chorizo gravy and large, luscious cheese curds that melt into the concoction and counter the spicy burn. A garnish of diced white onions, cilantro and limes cuts through the decadence. The only thing that could make this more delicious would be to enjoy it while listening to White Lion. Check.

This Latin American spin on the classic Canadian bar food is mighty tasty. However, what makes it so special — what makes Rock Star Tacos so special in general — is how much fun everyone seems to be having. Pelly, alongside his partner in life and business, Rebecca Schaaf, work the room, running music-themed trivia and regaling guests with outrageous stories behind the irreverent artwork that decorates the space. Bartending powerhouse Naomi Roquet concocts libations and slings ice-cold Nicaraguan beer while cracking jokes with her best friend, Schaaf. Meanwhile, front-of-house veteran Jack Noecker playfully banters with his tables, who are clearly there to have a good time. In these dark times, the entire scene feels like a glimmer of light.

You'd expect nothing less from Pelly and Schaaf, two industry veterans who spent a good deal of their careers playing the fine-dining game, only to come to the realization that they wanted to do something more carefree, whimsical and of their own making. They planted the seeds of that vision three years ago in the St. Charles planned community New Town; after a night of boozing following a show, bandmates Pelly and Matt Arana hatched a plan to turn a vacant concession-stand-sized building in New Town into a taco shack. Anchored by Pelly's culinary know-how and a small menu of punny-named tacos, Arana, Pelly and Schaaf opened Rock Star Taco Shack to a level of success that exceeded their expectations. 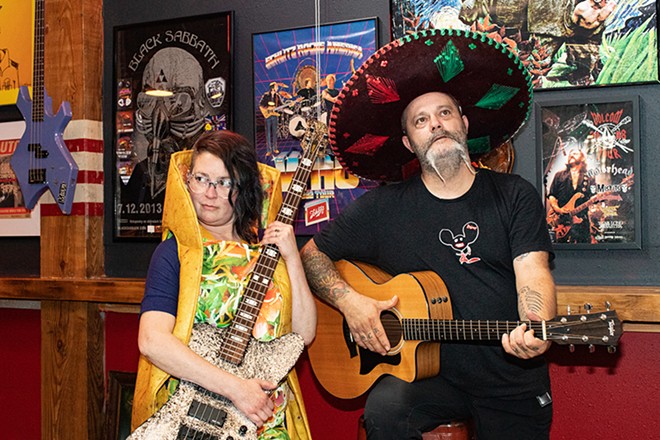 In the fall of 2020, the partners were approached by the owners of the small music production and events space Gaslight on the Hill to take over its existing restaurant space. The opportunity felt right, so Pelly and Schaaf (Arana has since amicably left the partnership) decided to go all in, transitioning the Rock Star Tacos brand from New Town to the Hill. In November of last year, the pair opened for business with an expanded menu, full bar and a determination to bring joy to their guests by not taking themselves too seriously.

They have succeeded in that vision. It's nearly impossible to dine at Rock Star Tacos without giggling at several points during the meal. From the intentionally bad portrait of Pelly and Schaaf that hangs over the entrance to the hilariously named dishes (Poutina Turner is just the start), everything at Rock Star Tacos seems designed to be smile-inducing. However, though the pair are silly when it comes to the vibe they've created, they are equally serious about the food. The dishes may feel approachable and easy, but they are actually prepared with the same exacting standards Pelly used when cooking in upscale kitchens. Thai Your Mother Down, for instance, is an excellent riff on Thai Panang beef curry that features hunks of tender, yellow curry beef tucked into a flour shell. The curry has a stunning perfumy undertone, and pairs beautifully with the accompanying cilantro garnish.

There Goes My Gyro is a shockingly successful take on the classic Greek pita sandwich, mostly thanks to Pelly's housemade gyro meat. Generously seasoned with Greek spices and tender, the meat is stuffed into a flour tortilla shell and finished with lettuce, cheese, onions and fresh tzatziki sauce. Though the tortilla is thinner than a pita, the dish is otherwise the quintessence of the form. 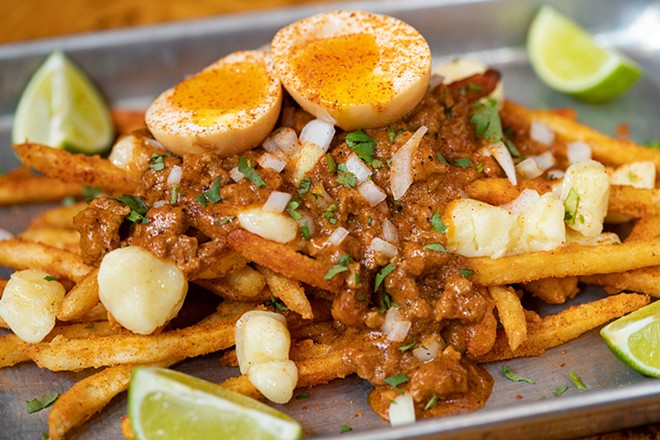 Pelly's fish tacos, dubbed Fish You Were Here, nail the SoCal staple. Noteworthy is the fried cod itself; its crispy exterior yields to wonderfully buttery fish. Likewise, the Number of the Beef is everything you want in a Gringo-style taco: rich, seasoned ground beef that is so juicy you get a dribble of orange rendered fat down your hands when you take a bite. His Birria Dollar Babies are another hit. Pelly's rendition of the braised-beef-meets-quesadilla dish pairs succulent shredded meat with gooey cheese and a side of delicate yet powerful consomme.

In addition to an expanded taco selection, Rock Star's Gaslight digs allowed Pelly and Schaaf to offer a number of other finger foods and entrees. The Skinny Puppies are perhaps the most noteworthy of the additions. For these bite-sized wonders, Pelly takes a semi-sweet hushpuppy and fills it with seasoned street corn. The result is a delectable fritter that hits every note: sweet, salty, rich, warm. Even the guacamole is a thing of beauty thanks to its chunky texture and Pelly's generous use of lime.

Pelly makes an excellent shrimp and grits, whimsically called Putton on the Gritz. The creamy cornmeal is amped up with the warmly spiced Rock Star Dust seasoning, a beautiful canvas for snappy shrimp and fried green chiles. His tamales, too, are absolutely stunning. Pelly credits his mother, a Cuban immigrant, with instilling in him her tamale-making prowess, which results in outrageously creamy masa that is stuffed with green chiles and covered in the restaurant's rich queso. Unlike every other dish on Rock Star Tacos' menu, the tamales do not have a funny name, showing how serious he takes his family's tradition.

However, the tamales are only a temporary departure from the silliness, as evidenced by the Hot for Pizza, a play on Taco Bell's Mexican pizza. For this monstrous dish, Pelly takes two fried tortillas, fills them with rustic-textured refried beans and seasoned ground beef, then tops the entire concoction with cheese, green onions, tomatoes and enchilada sauce. You wonder if the world would have not lost its collective mind when Taco Bell temporarily discontinued its Mexican pizza if we knew such a culinary wonder was available at Rock Star Tacos. 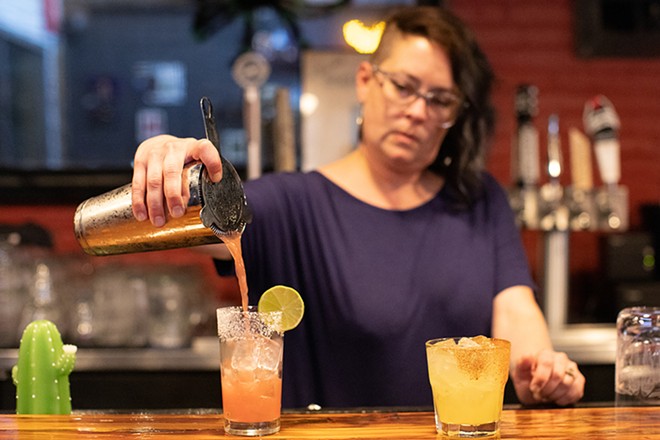 Mabel Suen
Cocktails are available at the bar.

The Hot for Pizza is nothing fancy — just some beans, a couple of tortillas and some sauce. However, thanks to Pelly and Schaaf, it becomes extraordinary. Taste has a lot to do with it, but more so, it evokes a feeling of comfort and lightheartedness that transcends its ingredients. That they can bring a smile to our faces when smiles are oh so needed is the ultimate marker of hospitality.