St. Louis Standards: Kenrick's Is Not Just a Butcher Shop. It's an Institution 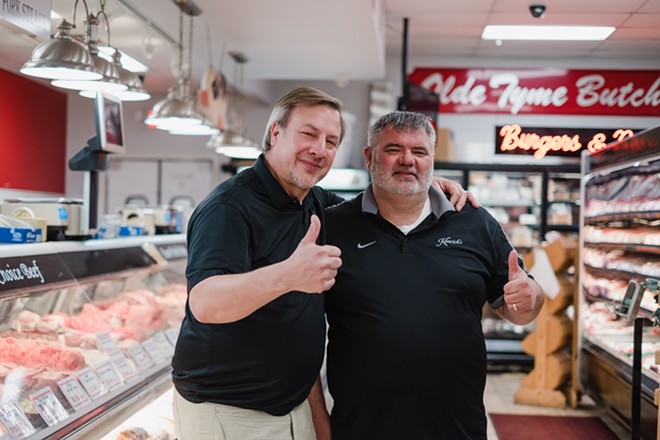 Joe Weinmann was not so keen on the idea of catering the wedding of one of his employees.

Back then, in 1985, his butcher shop and grocery store Kenrick's (4324 Weber Road, 314-631-2440) was humming along as south St. Louis' go-to place for sides of beef and specialty cuts of meat, and had only just started to dabble in roasted top rounds they would sell to customers in search of a ready-to-eat meal. However, his employee was so insistent that Kenrick's roast beef be a part of his special day, he implored his bosses to find a way to make it happen. Joe's brother and partner in the business, John, was happy to accommodate, and convinced his sibling to invest in some small equipment that would make doing the event easier — and accidentally launched one of the city's top catering businesses in the process.

"My uncle Joe was a little reluctant about spending the money on chafing dishes and things to get the catering gig off the ground, but my dad convinced him," says Steve Weinmann, John's son and now one of the main players at Kenrick's Meat & Catering. "My dad then went out and bought tossed salad and canned potatoes to have with the roasted beef, and when he was at the venue that night, people kept coming up to him asking if they could get his number so he could do their events. My dad was ripping off tops of receipts with their number on it to hand out to people. When he came in that following Monday, he said, 'Joe, we're now a catering company.'"

When you think of the quintessential St. Louis wedding — roasted beef in delicate jus, green beans, mostaccioli, rolls — that picture has been informed by Kenrick's. Since that impromptu catering launch in 1985, the beloved grocery store and butcher shop has defined the genre and solidified Kenrick's place in the hearts and souls of anyone who's ever done the cha-cha slide to the encouragement of a vested and bow-tied TKO DJ. 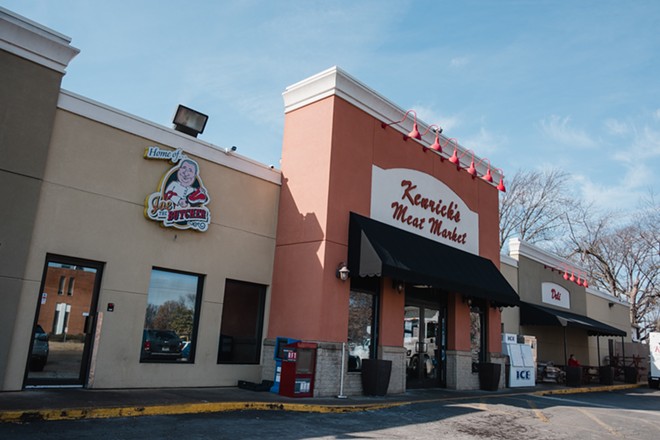 PHUNG BUI
Over the years, Kenrick's has expanded to larger digs and has added catering and a cafe.

However, the story of Kenrick's goes back much further than that wedding — 40 years further, to be exact, and well before the Weinmann brothers were even involved in the business. Founded in 1945, Kenrick's began as nothing more than a small meat market on wheels, run by a man named Herb Kenrick who would drive his truck around the south sides of St. Louis city and county, selling cuts of beef and a smoked and cured beef-jerky-like sausage called landjaeger to area residents. Kenrick eventually turned his traveling meat business into a small standalone shop in Affton that he sold to local businessman Paul Vitale in 1974. Under Vitale's stewardship, Kenrick's expanded its services and brought on John Weinmann, a noted area butcher, to help with the growing operation. When Vitale wanted out of the business in the early 1980s, John bought him out, brought on his brother Joe, and the two got to work creating the Kenrick's of today.

As Steve Weinmann explains, the current iteration of Kenrick's is one defined by diversity and adaptability. Always in tune with the wants of their customers, Joe and John Weinmann aimed to provide the sorts of products that were in tune with the culinary zeitgeist of a particular moment. In the early '80s, this meant creating a catering operation, selling in-home freezer units for customers to stock with cuts of meat and moving into prepared foods, such as mostaccioli and roast beef, for people to take home to heat and serve. As their customers' food curiosity expanded with the rise of cooking shows and celebrity chef culture, they've also learned to not only stock new and interesting products but also to be a source of knowledge.

"We have regulars who might go and shop someplace else, like the supermarket, and they will still call us up and ask us how to cook something," Steve says. "They will say, 'I always shop at Kenrick's, but I went somewhere else. How would you prepare this?' They know that somebody is always here to answer their questions, and we try to guide them in the best direction we can to make sure they have the best end experience. It lets them know what we are all about."

PHUONG BUI
Kenrick's distinguishes itself from larger grocery stores by its quality and personal service.

Mike Byassee, Kenrick's director of operations, believes this special relationship with their customers is what makes the market stand out in a crowded grocery field. Though he and Steve have witnessed the growth of specialty meat departments and products at other stores around town, they still see themselves as a traditional, mom-and-pop-style operation with an unyielding commitment to offering their customers the absolute best product they can.

"I think what Kenrick's means to our customers is trust," Mike says. "They come here because they trust us. We try to source our meats as local as possible with the least amount of additives that you can possibly have in meat. They come to us because they know they are getting the realest meat they can get, and they also come to us because our butchers are knowledgeable and can tell them how to cook something. That's big these days. Big markets are looking at the bottom line; we're obviously here to make money too, but we really care about what we do, and the customers feel that."

It's not only Kenrick's customers that understand just how special it is. In 2020, the market was recognized by Food & Wine, along with two other local stores, as one of the best butcher shops in the country. That such a nod happened just as the pandemic had decimated Kenrick's catering business and forced the company to adapt to its customers' evolving needs made the recognition even sweeter, but it didn't tell Mike, Steve or anyone else on the Kenrick's team what they didn't already know: that they are a beloved St. Louis institution that will have a special place in the city's food scene no matter how much the times change.

"We've always adapted to change and always felt ahead of the curve in anything we've done," Steve says. "We've been ahead of the curve in catering, of being a specialty market and of offering goods that set us aside from any other meat market. We are like Ted Drewes: You can get ice cream at any local supermarket, but you can't get great ice cream. When you come here, you get the service and quality you deserve, and it's cool to see people come out of their way to recognize what we do." 