The iconic product is the measure for all other St. Louis-style frozen pies

Andy Paulissen
The pizzas are sent through a machine that instantly freezes them and prepares them for packaging.

Not long after taking over the iconic St. Louis-style pizza label Mama Lucia's, Scott Ashby learned the hard way that one simply does not mess with a classic.

"We took off the picture of [Mama Lucia's founder] Miss Tumminello very briefly, and boy, did we get so much flack for it," Ashby says. "The previous owner had taken it off for a short time, too, and both times, she went right back on. I didn't think the picture was as important as it turned out to be, but people got really riled up when it came off. On our current label she's a silhouette, but she is on there. I don't see Mama coming off the label."

In retrospect, Ashby should have known that the departure of Lucia Tumminello's likeness from the front of the Mama Lucia's pizza label would be met with such angst. For 40 years, the brand has been a source of civic pride, occupying a special place in St. Louisans' hearts as the gold standard by which all other frozen, St. Louis-style pizzas are judged. With its thin crust, zesty tomato sauce, meat-heavy topping choices and Provel-like processed cheese, Mama Lucia's sits proudly as a little bit of the Lou in a freezer section chock-full of big-name national offerings. 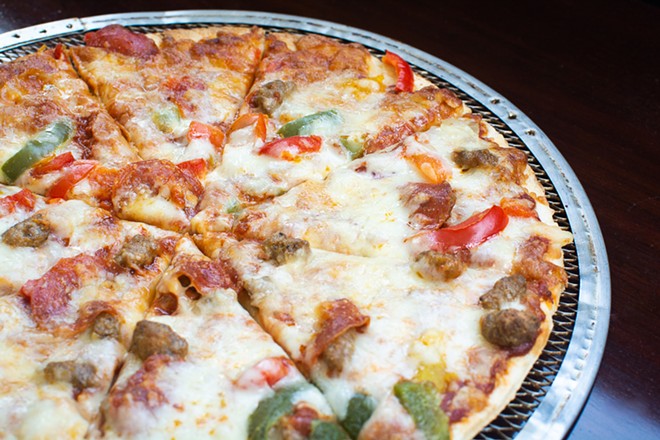 Tumminello never imagined that she'd be founding an icon when she started selling her pizzas in 1981. A native of Italy, Tumminello immigrated to St. Louis and settled in the Hill neighborhood where she would make her special pizza recipe for family and friends. Her pizza was so good that word began to spread around the neighborhood, and soon, those who had the joy of experiencing her cooking encouraged her to start selling her wares in grocery stores.

Prior to Tumminello's arrival on the frozen-pizza scene, there were no St. Louis-style offerings in grocery freezer cases. She found great success in filling that void and operated the company with two of her sons. To the best of Ashby's knowledge, the trio ran the business for roughly 20 years before selling it. That operator kept things running, business as usual, until selling it to Ashby in 2015.

Ashby admits he is an unlikely steward of such a beloved St. Louis-style pizza brand. A Chicago native, Ashby had never really heard of St. Louis-style pizza — let alone tasted it — until roughly a year before he bought the pizza's parent company, Lucia's. A businessman who'd previously owned two other frozen-pizza companies and a crust brand, Ashby got to know Lucia's because it was where he was having a product made for another endeavor. He got to talking to the then owner and casually asked how long he planned on continuing to operate Lucia's; when the man told him he only had about another year in him, Ashby told him to call when he was ready to sell. Sure enough, when that year was up, Ashby received a call from the owner asking if he was still interested. He said yes, a decision that set him on a course that would change his life both professionally and personally.

"I moved here when I bought Lucia's, met the woman of my dreams, married her, adopted her daughter and have become a St. Louis person," Ashby says. "I love the city, the people, the pace. I just love the city and have grown to love St. Louis-style pizza. It took me a little while to get used to it, but it really grows on you. I eat it every day, believe me."

Ashby ran Lucia's for a few years before selling it to another company, Sinzenard International Food Manufacturers, which does business as the popular south St. Louis food manufacturer Maria & Sons. Though he no longer owns the company, he still is president, serving as a steward of the beloved pizza label. The expertise he's learned over his years has given him keen insight into what people expect of a Mama Lucia's pizza, and he is careful that any changes he makes do not veer too far off course from what people have come to know and love. He knows better than to remove Miss Tumminello from the packaging, but he also understands that there are quality tweaks that can make for a better product. Under his watch, Mama Lucia's has gone from using sliced to shredded cheese, and he's also cleaned up some of the ingredients to make it a more wholesome product. He's also made the crust thinner and crispier and added more toppings to each pizza, making it heartier than its closest competitor.

Ashby is also proud to have helped spearhead a partnership between Lucia's and the popular St. Louis craft brewery 4 Hands. Through a separate label that bears the 4 Hands name, Lucia's has engaged in creative collaborations with fellow iconic brands such as Old Vienna, Mission Taco Joint and Sugarfire. Though the pandemic put plans for even more collaborations on hold, Ashby is excited to be again ramping up these collaborative products and has three new ones on deck: a chicken tikka masala pizza in partnership with India Rasoi, a cheeseburger pizza in partnership with Hi-Pointe Drive-In and a gyro pizza courtesy of Michael's Bar & Grill. 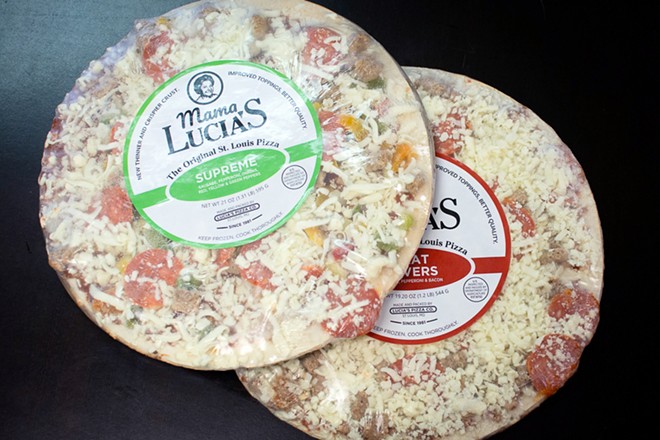 Andy Paulissen
All of the pizza dough is hand rolled and formed in house.

Another innovation Ashby has just launched is a three-day workweek, something he hopes will allow his employees to find a work-life balance. As he explains, the new schedule, which launched at the end of July, was a response to staffing shortages; having no luck finding employees simply by raising wages, Ashby decided to think creatively and listen to the mood of the labor force. In addition to the three-day, 36-hour-per-week schedule, he's paying his employees for a full 40-hour workweek, and so far, the response has been overwhelmingly positive — so much so that he believes it can be a model for other businesses to provide a good quality of life for their employees.

Ashby hopes that, with moves like this, he can continue to grow the company while remaining true to its legacy. One of the things he first noticed after moving to St. Louis from Chicago is how fiercely loyal to its own and how proud the metro area is. He understands that Mama Lucia's means something to people, and he doesn't want to mess that up. In fact, it's what guides every decision he makes.

"It's just been this steady thing out there that's like an Old Faithful," Ashby says. "People brought up their kids on it, so it goes through families. We feel a responsibility to that. This brand will be around a lot longer than I will."