St. Louis Standards: The Piccadilly at Manhattan Is a Piece of Restaurant History

Vu Phong
The Piccadilly at Manhattan's Molly Cooper is a proud steward of St.Louis restaurant history.

Molly Cooper would love to share the story of why her great-grandfather Nicolo Collida found himself with a one-way ticket to St. Louis from the old country, but it happened so long ago, the details have been lost to history — and even if they hadn't been, she would not be at liberty to talk about it.

"My great-grandfather Nicolo came here, off the boat, from Sicily," Cooper says. "The story is he saw something he shouldn't have, and he was sent here for his protection. You can draw some ideas from that. There are so many stories, I don't know if you could print them."

For a restaurant as old as the Piccadilly at Manhattan, the restaurant Collida founded roughly a century ago, it's not shocking that many of the details surrounding its early years have gotten lost. Why Collida found himself in St. Louis, who helped him get started in the business and even what year the restaurant opened are more a matter of lore than historical fact. What Cooper does know for certain is that Great-Grandpa Nicolo signed a liquor license for the place in 1934, establishing it as the Piccadilly Buffet, though she is pretty sure the restaurant started well before that. 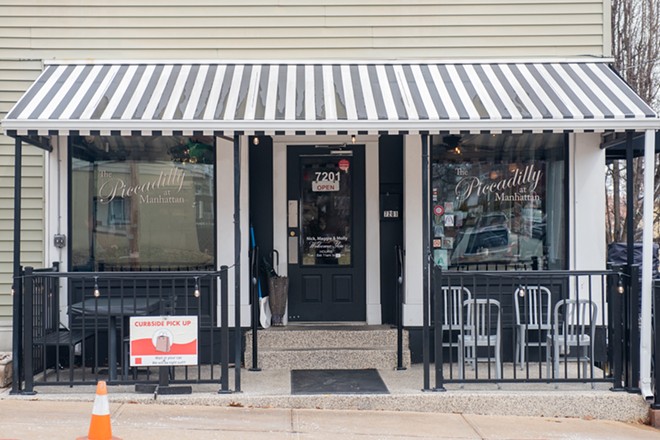 Vu Phong
The Piccadilly at Manhattan is one of, if not the, oldest restaurants in town.

"The building is from 1900; we always knew there was a commercial space on the main level and a residential space upstairs," Cooper says. "During Prohibition, there were no liquor licenses issued, so we can only draw a definitive line from 1934. However, we have had people do research over the years, and they say we are the oldest restaurant in town."

Regardless of the exact date of its establishment, there is no question that the Piccadilly is a living piece of St. Louis restaurant history. Founded as a cafeteria-style lunch and supper counter, the quintessential neighborhood eatery made a name for itself as the place to go for homestyle, easy comfort food — fried chicken and ravioli, as its sign still says — that people would order directly from the kitchen across a large bar. Even after the elder Collida passed away in the '50s, the restaurant remained essentially the same under the stewardship of his two sons, Paul and Tony. When Paul moved on to other ventures, Tony and his wife, Phyllis, took over the place and cemented its reputation for simple, honest food.

Phyllis continued to run the Piccadilly after her husband passed in 1983, but the restaurant underwent a significant transformation thanks to a number of forces, including changes to the neighborhood brought on by the loss of industry in the area. During that time, the Piccadilly transformed into a tavern environment, catering to more of a bar crowd, with pool tables, dartboards and a sandwich-heavy menu, and it continued on in that form for nearly twenty years until Phyllis felt that it was time to pass the torch to the next generation. 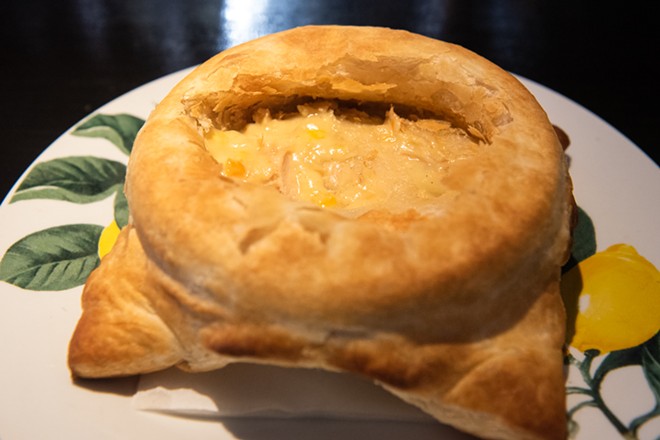 Vu Phong
The pot pie is one of Piccadilly at Manhattan's signature dishes.

"My grandmother wanted to sell it, but it was in such disrepair nobody wanted it," Cooper says. "I think there was some sentimentality and nostalgia in there; nobody wanted it, but they weren't prepared to see it torn down, so my parents took on the challenge."

Phyllis sold the Piccadilly to her son, Nick, and his wife, Maggie, (Cooper's parents) in 2001, though the restaurant was far from turnkey. Wanting to restore its legacy as a neighborhood eatery, the Collidas closed its doors and spent the next six years balancing their full-time jobs with managing a full-gut rehab of the Piccadilly. Finally, after years of hard work and quibbles about paint colors and decor, the husband and wife opened up the new Piccadilly in December of 2007.

"It was December 18th, my mom's birthday," Cooper says. "My dad got up really early that morning to go out to the store and get her a birthday present, but he couldn't find anything. He didn't know what to get her, so the joke is he got her a restaurant for her birthday."

Cooper describes the changes her parents implemented as a restoration of the original Piccadilly. Eschewing the buckets of beer and happy-hour specials for pot pies and fairly priced bottles of wine, the reimagined Piccadilly has spent the last fifteen years honoring its past by serving the sort of dishes you'd expect to see on Grandma's Sunday supper table. Cooper describes the fare as unapologetically simple; the fried chicken, for instance, is made from nothing more than flour, salt and pepper, and is reminiscent of what people ate growing up but no longer prepare for themselves.

Vu Phong
Though it was fully remodeled fifteen years ago, the Piccadilly at Manhattan retains its essential character.


"My parents always say that they wanted to make a place where they'd want to go," Cooper says. "They're not reinventing the wheel, but they are making sure it's of good quality and what they'd want to eat."

Cooper believes that the Piccadilly's staying power goes well beyond its food, though — even the mammoth pot pie that has become a signature of the restaurant since her parents reopened the place. Beyond its historical significance, the relationships she and her parents have developed over the years with their customers have made them feel invested in the Piccadilly's success. Cooper is proud of how many of their names she knows, and she understands that familiarity makes her guests feel like they are a part of something. And no matter how many changes the building, neighborhood or even the menu might weather over the years, those relationships are the tie that binds the Piccadilly to its past — and will ground its future.

"A lot of people say we are consistent," Cooper says. "Nobody will remain successful if they don't update the paint or have the floors redone, but no matter those twists, we still try to fit them in with who we are. People expect to come in and see Nick or Maggie — and now I'm that person — and if we can keep that up, we can give them that continuity." 