Throwback of the House: Triple Play Warmer Is Not So Hot

Todd Ehlers, Wikimedia Commons
So sue me. I'm not a baseball fan, so the irony of making a dish called Triple Play Warmer after the Cardinals lost their second game to the Dodgers was lost on me. All I knew was it was a cold and rainy night and I could use some warming.

The master of all advertising cookbooks, A Campbell's Cookbook: Cooking with Soup, spawned this recipe. I have the 1976 edition, the thirteenth printing. That's a hell of a lot of recipes with canned soup, and they can't all be winners like tuna casserole. The Triple Play Warmer, like 98% of the recipes in the book, wasn't created because it tasted good. It was created to sell as many cans of soup as possible. 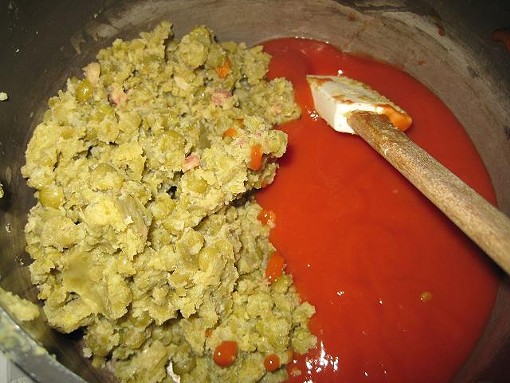 Robin Wheeler
Stir together a can of split-pea soup and a can of tomato soup. Add a can of beef broth. All Campbell's, of course. Stir in two soup cans filled with milk and a splash of sherry. Then heat it up.

There are better ways to warm oneself. Self-immolation, for example. Or wearing a leopard-print Snuggie.

I knew I was in trouble as soon as I opened the can of pea soup and the smell of canned ham hit me.