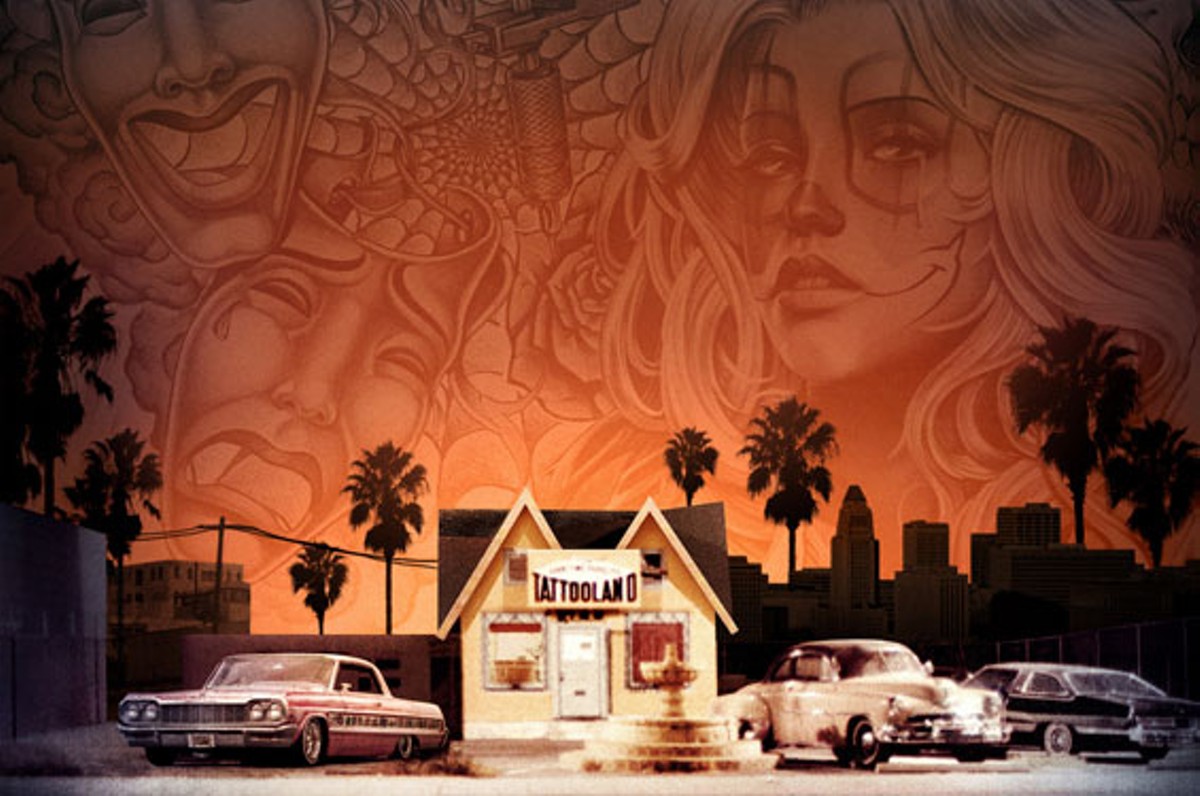 Tattoo Nation documentarian Eric Schwartz isn't inked himself — "I'm nicknamed 'The Virgin,' " he admits — but when he started photographing tattoo conventions, he stumbled across an untold, half-century history of color and style inextricably linked to California. Unlike the permanent art they've created, these tattoo artists and their clients won't be around forever.

"Let's be frank: Most of these people aren't going to live until they're 80," Schwartz says, referring to the gun violence, addiction and general hard living that have been part of the tattoo scene in Los Angeles County. "The time to get this story is now, or else it's going to be lost."

So the sculptor and art photographer, whose work is currently up at Denver's Robischon Gallery, traded in his still camera for film and went to work on his first movie.

The film, set for a public premiere March 28 before its April 4 opening, starts around 1955, when being spotted with a tattoo meant one of two things: "Were you in the Navy, or were you in jail?" jokes Don Ed Hardy, the literal don of California body culture.

People could tell if you got your ink on shore leave or in San Quentin. Sailor tattoos sprung from Long Beach's Pike, a stretch of pier with six tattoo shops selling 20-minute, four-color tattoos for $15 a pop. When the boats came in, the parlors would stay open for three days cranking out anchors, roses and hearts. Don't ask for a design that's not on the wall — hell, don't even ask to change your flower from red to yellow.

That year, Ed Hardy was 10, too young to even enter a tattoo shop, but pier legend Bert Grimm snuck him in to watch him work. After high school, Hardy headed north. "In the '60s in the Bay Area, there was this whole thing about freedom and personal liberation," he says. "To me, tattooing was part of that."

Meanwhile, a completely opposite tattoo style was evolving in a completely opposite place. Prison tattoo artists had the luxury of time but a scarcity of tools. Instead of the traditional four-color machines, inmates made needles by sharpening staples and guitar strings, and mixed ashes from burnt Bibles with toothpaste and soap to create a rainbow of grays. The artists had to work so slowly that actor and ex-con Danny Trejo's chest piece, a sombrero babe that stretches from nipple to nipple, took fellow inmate Harry "Super Jew" Ross ages to finish — especially since they kept getting transferred apart.

"Two and a half years, three penitentiaries, and it's the most famous tattoo in the world," Trejo laughs.

For prison tattoos, part of their power is their individuality. Says Trejo of Ross, "People would ask him for the tattoo and he'd say, 'I can't, I can't.' He hasn't put this tattoo on anybody else. It's like doing two Mona Lisas!"

Like Trejo, who would go on to flash his chest in the film Machete, these prisoners advertised their ink when they got paroled, creating demand for the fine-line, black-and-white style emanating from East LA in the late '60s and early '70s. But there was a problem: Modern guns couldn't mimic their single-needle detail work, born out of necessity in the prisons. The professional machines used a minimum of three needles, and sometimes as many as 20. They were great for inking a solid heart on a sailor in 30 minutes or less, but too thick and clumsy for accurate portraiture.

"The first time I saw gang writing was in Venice Beach," Rudy says. "I was so attracted to that style that I wrote all the letters I could find on a napkin so I could learn it."

With the Pike near-demolished, he and Charlie Cartwright headed east in 1975 to open Goodtime Charlie's Tattooland on Whittier Boulevard, on a block surrounded by 27 gangs.

"It was mainly cholos, bikers, low-riders and regular blue collar people," Rudy says. "We just thought this would be a great place for a tattoo shop — and it was."

When his new clients wanted the black-and-gray prison style that his guns couldn't replicate, Rudy tinkered with the machines until he invented the first new mechanical tattoo style in a century: It funneled three streams of ink into a single needle point, and made Tattooland the epicenter of monochromatic photorealism.

"We weren't trying to change the course of tattoo history," Rudy says. "We were just trying to make a living."

Soon after, Ed Hardy discovered Tattooland's work at a tattoo convention. That year, he bought the company to ensure that this new art form and the artists who'd launched it had economic stability.

"I'd always been really into lowrider stuff just as an observer, because I was a totally WASP white boy from Corona del Mar, the heart of Orange County — restrictive, repressive, right-wing stuff," Hardy says. "This whole cruise scene on Whittier was nuts. The recreational drug of choice those days was angel dust."

When Whittier Boulevard exploded into gang violence in the '80s, Tattoo­land relocated to Anaheim, where Rudy still works today. On the walls are old tattoo samples from the Pike — more for decoration than inspiration, as today's customers want personalized tattoos — and several portraits of Tattooland's patron saint: Edward "Chuco" Caballero, who inked every inch of his body below the chin in fine-line black and gray.

Chuco, who died in 2008 at 54, inspired Schwartz to film Tattoo Nation.

"He had these portraits on his legs and they were like photographs," Schwartz says. "On one leg, he had all the actors who played gangsters: Al Pacino, Marlon Brando, Joe Pesci — the usual cast of characters. Then on the other leg were portraits of actual gangsters. One side of his torso was Aztec imagery, the other side was American Catholic imagery, and then there was Mexican imagery merging across."

Even with Chuco introducing him around as his "brother," Schwartz spent three years convincing the community that the lanky gringo with a passion for Chicano culture was trustworthy.

Although the documentary is titled Tattoo Nation, it's clear its heart pulses with the beats that used to bump from the lowriders on Whittier Boulevard, and that Chuco is the film's soul.

"Originally, I was going to call it LA in Black and Gray," Schwartz says. "People thought it was a pollution movie."

The skill and the narrative of Chuco's ink capture the story of California's tattoo culture, which, thanks to Ed Hardy's tattoo magazines and the last decade's reality TV shows, like LA Ink and Ink Master, has spilled past the state's borders to the rest of the world.

"Duchamp said everyone is an artist," Schwartz says. "The tattooed are like directors of their own movie."