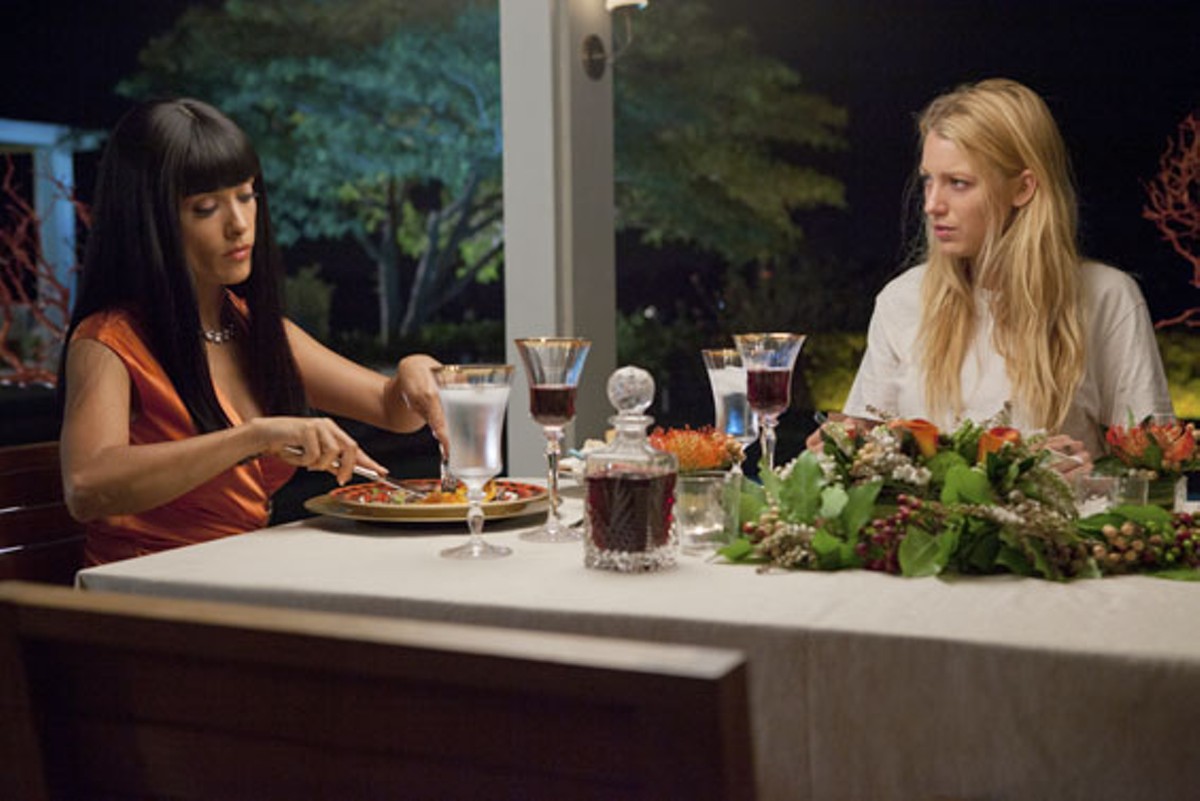 "Welcome to the recession, boys," says John Travolta's DEA-double-agent profiteer in Oliver Stone's Savages, based on Don Winslow's novel. Savages is a movie of its moment, though both its good guys and bad guys (if there's really even a difference) are unquestionably the 1 percent of their industry — that is, the weed trade. The setting is the 100 miles surrounding the California-Mexico border circa right this minute (a subplot involves Mexican elections, which took place in real life on July 1), with Stone focusing on the human and fiscal politics of California's twin pot economies, one quasi-legal and the other criminal — a split that the film suggests can only last for so long.

California dudes Ben and Chon (Aaron Johnson and Taylor Kitsch) are dragged into a turf war with the expansion-minded Mexican cartel run by Salma Hayek's drug-war widow Elena and her brutally amoral deputy, Lado (Benicio del Toro). The Mexicans regularly show their power by creating and disseminating videos documenting torture and beheadings. Eighty miles over the border, in Laguna Beach, Ben and Chon supply their ultra-potent, genetically engineered strains to legal medical dispensaries but make their real money illegally shipping out of state. The product and its profits fuel the boys' lifestyle of neo-hippie decadence, embodied by the business partners' enthusiastic bedroom sharing of poor little rich girl turned earth-mother floozy Ophelia (Blake Lively). Both sides consider the other to be "savages" — which we know because they say it aloud multiple times.

More than two hours long — and building to two endings, one romantic-tragic and one quasi-ironic and romantic-ludicrous — Savages is bloated with plot and exposition, much of which is related via the incessant voiceover of Ophelia, who goes by O. (As she tells us...via voiceover.) "Just 'cus I'm telling you this story doesn't mean I'm alive at the end of it," she says at the beginning of the film, introducing the possibility of narrative innovation that the movie to come doesn't fulfill. Other pearls of wisdom delivered through this device: "He's always trying to fuck the war out of himself. I have orgasms; he has wargasms" and "Dope's supposed to be bad, but in a bad, bad world, it's good." Sometimes paraphrasing Stone himself at his most stoner-utopian, O. is made quite literally the voice of the movie, a responsibility the character is too wispy to shoulder. Lively is both appropriately spacey and convincingly vulnerable, but as a point of identification, O. is too naive and self-absorbed to care about, even at her most victimized.

The film's micro-time-capsule approach is interesting, but Stone, Winslow and co-screenwriter Shane Salerno's indulgence in both above-the-law fantasy and the only-in-Hollywood notion that love trumps business are more potent than any point they're trying to make about our real world. Of course, the law itself — represented by Travolta's fed who works both sides to serve only himself and whose never-seen wife is said to be using reefer for the pain of her cancer — is both corrupt and hypocritical. It's more indicative of the film's lack of interest in character that psychological exploration of Chon, a veteran of our Middle Eastern wars who smuggled sweet pot seeds out of Afghanistan and employs his former fellow soldiers as sniper-enforcers back in the States, is limited to O.'s deduction that "he came back with lots of cash but no soul."

Soul is something Savages has in short supply, not least because Kitsch and Johnson register as blanks oncreen. In contrast, Hayek and del Toro, both sporting apparently intentionally terrible wigs, give big, scenery-chewing performances and earn our interest and empathy even while committing heinous acts. Their knowing camp, particularly contrasted by the dishwater petulance of the trio of white people the movie seems to want us to root for, at least gives us something to laugh with, rather than at. 