"Showgirl is my Yentl": The 145-Minute Showgirls Sequel That Could 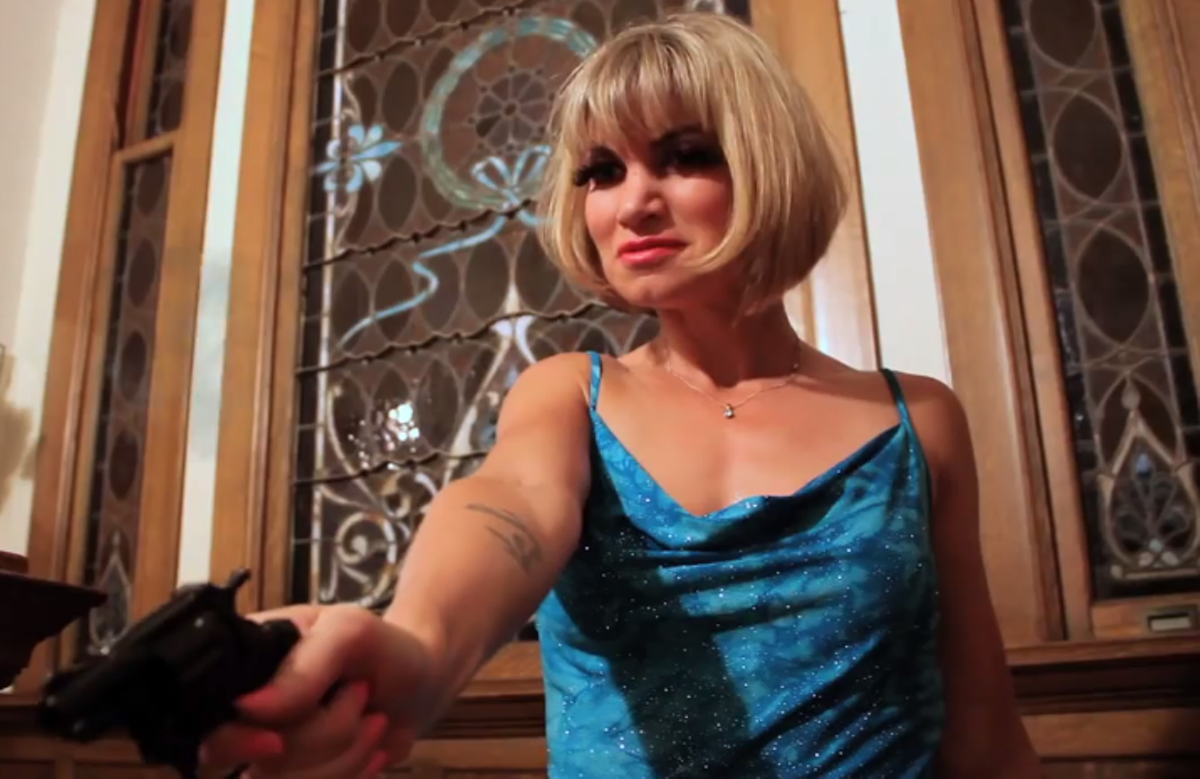 "Showgirl is my Yentl": The 145-Minute Showgirls Sequel That Could

Written, produced, directed, and edited by Rena Riffel, who also reprises her role as Penny from the original Showgirls, Showgirls 2: Penny's From Heaven has been available on VOD for at least a year, but is now being released on DVD from Wild Eye Releasing, thus conferring onto it the legitimacy that physical media somehow still offers. The promised DVD extras include a behind-the-scenes doc and director's commentary, but the screener copy provided did not include any of the extras, so we're left to ponder the film as it is--as well as its torrid history, which is no less entertaining than the final product.

Before criticizing the film too harshly, it should be pointed out that Showgirls 2: Penny's From Heaven--henceforth referred to as S2: PFH, so we can ignore the fact that the title looks like a typo--is practically an auteur work by Riffel, a woman who is, by the standards of the youth-obsessed film industry, past her prime. Riffel already had a career before the first Showgirls in 1995, and she's continued working since, including appearing in David Lynch's Mulholland Dr. For that matter, S2: PFH isn't even her first directorial effort, having already made 2009's Trasharella (which is pretty much exactly what it sounds like, and a musical to boot). And considering how deeply Showgirls was informed by the male gaze of director Paul Verhoeven and writer Joe Eszterhas, so much so that you can feel their sweaty palms on every frame, it's a minor victory that the closest thing we'll get to an official sequel to Showgirls--even if the marketing materials are careful to refer to it as a "unofficial follow-up" and an "homage to the Showgirls legacy"--is the work of one of the women who was on the receiving end of that gaze. When champagne is poured over Riffel's bare breasts in S2: PFH's lesbian pool-sex scene, it's all happening on her own terms. While S2: PFH is not exactly a feminist statement (though that would make a swell pull-quote, wouldn't it? "Not Exactly a Feminist Statement!"--The Village Voice), the act of Riffel making it was.

All that said, S2: PFH is an absolute mess on a technical level. That budget was in the neighborhood of $30,000, and it doesn't feel like a penny (ahem) of that made it onto the screen. ($5,108 of that budget came from a Kickstarter--which, in 2010, meant Riffel was ahead of the curve.) The credits claim it was "Shot on 35mm film, 8mm, and the Canon 7D," but it's safe to say the majority of the ungainly 145-minute running time was shot on the Canon digital camera. Most scenes rely on the existing light of the given indoor or outdoor location, and although the end credits insist that there was a boom operator, the dialog sounds like it was recorded by the camera itself. There's plenty of room echo and outside traffic, and the ambient sound often changes when the scene cuts between different shots.

This is hardly the first low-budget movie to commit these crimes, of course, and while the go-to comparison for incompetent filmmaking is Ed Wood, S2: PFH more resembles the work of Ray Dennis Steckler (The Incredibly Strange Creatures Who Stopped Living and Became Mixed-Up Zombies, The Hollywood Slasher Meets the Skid Row Strangler) or Doris Wishman (Bad Girls Go to Hell, Deadly Weapons). Actually, Riffel is a far more competent filmmaker than Wishman, who never really cared about the movies she was making. This is clearly a labor of love.

Pamela Chelin at LA Weekly wrote a blow-by-blow summary of the film if you're so inclined, but no description of S2: PFH can really do it justice. It's intentionally silly and lurid and not meant to be taken seriously--very much unlike the original, as Verhoeven and Eszterhas believed they were making An Important Movie (Than Can Also Be Jerked Off To). This is a ready-made cult film, the cult being people who know the first film by heart. That's problematic for the movie's shelf life, as the technical issues can make it difficult to watch for people who aren't rabid fans of Showgirls, and films that set out to be considered "cult" seldom work. (It's why you don't hear much these days about the Rocky Horror Picture Show sequel, Shock Treatment.) And, again, wow: S2: PFH is two and a half hours long, 15 minutes longer than the original, and an hour longer than it has any right to be. Just because it's cheap to shoot on digital doesn't mean that everything that should be used. David Lynch, who's thanked in the S2: PFH credits, did the same thing with his shot-on-video Inland Empire, which also went on for an hour longer than it needed to.

When I've mentioned this movie, people tend to respond with an incredulous, "Showgirls 2 exists?" Of course there's a Showgirls sequel. The only part that should come as a surprise is that it took this long. What's more, this isn't the only attempted Showgirls sequel, but this is the one that made it to the mainstream market--and, therefore, it wins. The history is fascinating.

An early rumbling about a sequel came on October 5, 2009, when JoBlo.com reported that a German director named Marc Vorlander was developing Showgirls 2: The Story of Hope. Vorlander claimed that Rena Riffel was going to reprise her character from the original, in which her name was Hope as well as Penny, you see. The JoBlo article was titled "Showgirls Sequel???", and all three of those question marks were necessary.

On October 7, The Stranger interviewed Riffel, who was baffled to have read that she was supposed to be involved. She said Vorlander (whose IMDB entry at the time featured no credits whatsoever) had contacted her a year prior and asked if she would be interested. She'd said yes, though she was skeptical that he could get the rights to the characters, and she never heard from him again.

Two days after that, The Stranger followed up with Vorlander, who claimed to have been "shocked" (shocked!) by Riffel's statement--and said that they were now back in touch and determined to work together. He also promised that Showgirls 2: The Story of Hope would have "more nudity," "brutal action," and "a great soundtrack" by Laura Branigan's producer. Oh, and the film was not and never would be about the character of Hope, never mind the title, and that it was going to be less of a sequel and more of a "reload." Oh, boys.

All was quiet until March 2010, when Twitchfilm.com reported that Riffel was no longer working on Vorlander's film, now called Showgirls: The Return (taking a page out of the Cocoon-sequel playbook), citing it as "horrifically graphic and out of the show's original story theme." Instead, she was now working on her own sequel, called simply Showgirl (taking a page out of the Alien-sequel playbook, but reading it backward). She posted a teaser trailer for it that no longer appears to be online--and because she was going to write, direct, and star in the picture, Riffel compared herself to Barbra Streisand, saying, "Showgirl is my Yentl." That right there, that's the kind of moxie that gets movies made.

Vorlander was having none of it, of course, ranting in his uniquely Teutonic way to Twitchfilm.com that Riffel was full of spätzle: "There is no second Showgirls sequel! My film Showgirls: The Return is already in the post production and will be finished this spring. The trailer for it is clicked more than 15 million times on the official website. Rena Riffel's teaser is watched less than 1,000 times, although it was published only days after my trailer. It's a teaser for a film that does not even exists … pure fake--a big lie."

A four-minute teaser for Vorlander's newly christened "music photo play" Showgirls: Exposed was released that June, and it's … something.

In addition to being deeply unsafe for work (seriously, the original Showgirls in its entirety would be safer), the opening voiceover during the seemingly endless titles establish that Nomi--Elizabeth Berkley's character from the first film--died a "very slow painful death" on the toilet of a German strip club, after ingesting cocaine contaminated with rat poison. That's exactly how you'd expect a fan of the first film to continue the story, right? It just gets more dark and weird and disturbing from there, much like Riffel had suggested. Also, in an apparent bid to supplant Uwe Boll as his country's douchiest director, Vorlander threatened a German blogger for not liking him; Google translates it as "I'll legally the ass tear open you up to the back of the head and file criminal complaints." OK, then.

Vorlander's Showgirl: Exposed has been available since early 2011 as a manufactured-on-demand DVD-R through Amazon. The cover art alone makes Riffel's film look like a masterpiece, and since Vorlander's self-published work clocks in at a mere 60 minutes and doesn't really qualify as a movie, the IMDB slapped a (V)-for-"video" on it. That's gotta sting, but he's kept working, including another 60-minute thing with a trailer that proudly proclaims that it's produced by the director of Death Wish V, and a documentary about said Death Wish V director that clocks in at 75 minutes. (If Riffel and Vorlander had worked together, I imagine their film would have been exactly 90 minutes long.)

But Riffel's Showgirls 2: Penny's From Heaven is hitting video--and perhaps more importantly, it's played at the Castro Theatre in San Francisco as part of Peaches Christ's annual Showgirls celebrations, with Rena appearing onstage. Her handmade, deeply flawed film has been shown on the 25-by-44-foot screen of an honest-to-goodness movie palace, and has found acceptance by the very cult that's kept the original alive for all these years. It couldn't have happened to a nicer Showgirls sequel.