The Satanovsky family charmed the Boss back in 1981 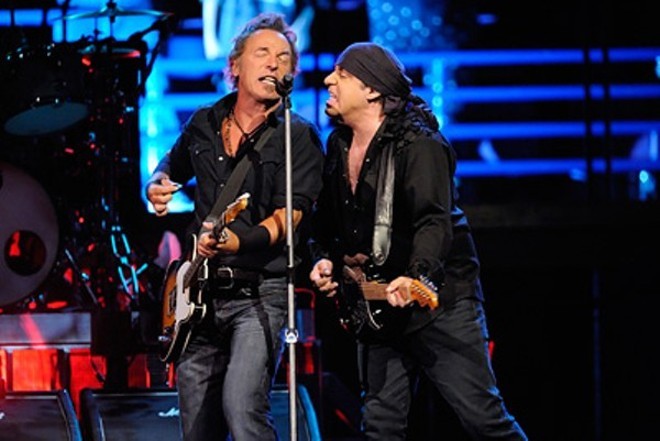 TODD OWYOUNG
Bruce Springsteen has a friend in St. Louis.

Here's a story that sounds apocryphal, but isn't: Bruce Springsteen made friends with a teenager after they met randomly in the lobby of a St. Louis movie theater in 1980 — and the friendship continued for years.

Talk about the coolest celebrity encounter ever! And get this: The details actually check out.

The story, which the Boss recently relayed on the BBC's Graham Norton Show, dates back to 1981. Springsteen had released The River the previous fall and, after initially playing two nights at Kiel Opera House (now Stifel Theatre) in October, he came back to St. Louis in January for a show at the Checkerdome, the now-demolished arena across I-64 from Forest Park.

At some point during the trip, the nation's biggest rock-and-roll star wandered into a movie theatre.

On the bill: Woody Allen'sStardust Memories, which had debuted in September of 1980.

People didn't like the movie. Here was the director of Annie Hall and Manhattan, and he seemed to be painting his fans as pretentious (and potentially murderous) grotesques.

Springsteen nevertheless wanted to see it. But then, in the lobby, he was approached by one of his fans, whom he describes to Norton as a "kid."

"He was there with his girlfriend and said, 'Do you want to sit with us?'" Springsteen says.

"So I went, and I sat,  and we watched the movie," Springsteen continues. "And he said, 'Is that how you feel about your fans?' I said, 'Not so much.' He said, 'I'm going to go home now. Will you come home and meet my parents?'"

"You didn't!" another guest on the show cuts in.

"I said, 'OK,'" Springsteen says, smiling modestly. "So, I went somewhere in St. Louis, with this kid, and we walked in the door, and it's about 11 o'clock at night. And he says, 'Mom! Mom! I have Bruce Springsteen with me!' And she goes, 'Who?'

"And he runs in his bedroom and comes out with the album cover and goes 'BRUCE SPRINGSTEEN.'"

And then the mom gets it.

"Oh my God," she said, per Springsteen. "Let me make him some eggs!"

"And so around  midnight," Springsteen continues, "I was sitting in a little house in St. Louis, having some eggs with this kid and his mom, and I saw them for decades after that every time we came to town."


If you ever met your hero you’d hope they’d be as cool as this!

BRUCE SPRINGSTEEN tells GRAHAM NORTON about the time he made a fans’ dreams come true. pic.twitter.com/5S1oBP90q9

So, if Springsteen wanted to prove he isn't Stardust-era Woody Allen, not-so-secretly loathing all of us as we clutch at his coat and beg for selfies, he couldn't have picked a better story. Rock stars, they're just like us — they hang out in little houses in St. Louis!

And the best part is that it's (almost) entirely all true. Decades ago, matriarch Sophie of the Satanovsky family relayed her version of the story to Channel 5's John Pertzborn.

She told the station that it all began when Springsteen was standing in line for popcorn at a movie theater in Brentwood. Only in this story, the "kid," Steve Satanovsky, was there with his sister, Lisa.

Mom Sophie (helpfully described on screen as "Bruce's friend") told Eye Witness News that the Boss actually sat between the two siblings during the movie.

"On the way out," Sophie Satanovsky recalled, "he asked Steve for a quarter so he could call a cab." Instead, the siblings offered to drive the rock star home — but said they'd have to stop by their mother's house first.

As Sophie related it, when they all came inside, she initially didn't believe it was actually Springsteen, and it took not only holding up the album cover to his face, but Springsteen showing his credit cards to establish his identity.


According to Sophie, they then sat around and "he told us about his mom, and his dad, and his folks." Springsteen said his dad wished he would cut his hair and be a lawyer. Then he had Sophie call his mom and relate that he'd had a good, home-cooked meal.

Sophie told Channel 5 she hadn't talked to Springsteen since 1982, perhaps giving lie to the rock star's story about a long-time friendship (or maybe he only stayed in touch with the siblings?). Even so, she said, "There's a word in Jewish — a mensch. He was such a nice person, coming into the house."

One interesting digression from the story Springsteen told on the BBC: Sophie Satanovsky said she actually fed him not eggs, but bagels. What are the odds they were bread-sliced?

Sarah Fenske is the executive editor of Euclid Media Group, overseeing publications in eight cities. She is the former host of St. Louis on the Air and was previously editor-in-chief of the RFT and the LA Weekly. She lives in St. Louis.
Read More about Sarah Fenske
Scroll to read more Music News & Interviews articles (1)

The Best Concerts in St. Louis This Week: November 10 to 16