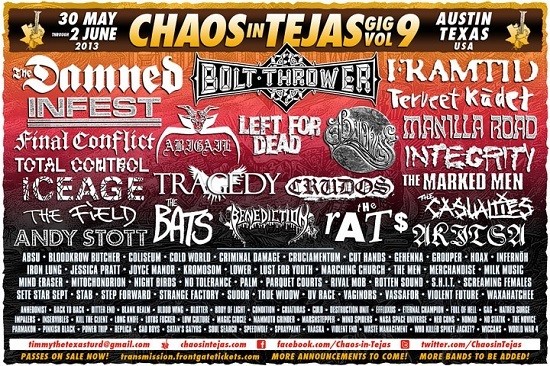 After persevering through a driving regimen of fourteen consecutive hours through the middle of nowhere (and barely winning a race with an Oklahoma tornado) we finally arrived in Texas for Chaos in Tejas. Grown-up humans from every sub-genre of punk rock culture started checking into motels and wandering the streets of Austin on Thursday, braving the relentless, blistering sun (that thing is a real dickhead) to meet up with their back patch-bearing, world-spanning bretheren/sisteren (it's a word; says so on some bible site). Punx from all over the world came to see what Austin star promoter Timmy Hefner's annual celebration of talent, hype, and reunions in the DIY community was going to be for 2013.

This show kicked off the whole half-week-long party in downtown Austin. It was one of those absurd and fun KCDIY events; Nuke Cult's dirty, fast hardcore terrorized the crowd into a frenzy from the get-go. Non-stop stage dives took place as far as the eye could see for each band's ten to twenty minute set.

One of said dives went awry as the singer of Dirty Work (also KCDIY) accidentally caught his scalp real bad on something, tearing it open, and was rushed to the hospital. He swore he'd be back before the show was over to make sure DW could play.

Hometown pit masters Breakout were up next. The band sounded like a mix of NYHC with something weirder thrown in, like the Zero Boys maybe. Lumpy and The Dumpers jumped up on stage next, and singer Martin Meyer snarled random forest creature noises into the mic as the band tuned. The nasty natives of St. Louis destroyed the crowd and got rid of some test presses in the process. Denver's Negative Degree played next, with a killer set of '80s throwback-styled fast hardcore. Everyone cringed as the singer of Dirty Work returned -- with fresh head staples -- ready to have them tear open and spread haz-mat filth on the crowd. Luckily, no such medical disaster happened, just sick pitting and contagious hugs between sweaty, hairy people. The bar was set. Could the rest of the weekend follow suit?

In between shows, it wasn't hard to find cheap eats and refreshments, with the abundance of food trucks in the neighborhood. The main factors in keeping "chaos within reason" were a hell of a lot of water and pacing oneself with chemical intake. Some followed these guidelines; others (mainly crust-punk/oogle/train-hopper types) didn't. Their drunken antics also provided the oldest free entertainment in the world during the ever-present heat wave: watching people fall down. This activity went with cheap pizza and gallons of water quite well.

Seeing the charged liberty spikes crash into dirt was a reminder: Oh shit, the Casualties are playing tonight. This prompted a rushed power-walk to the ironic spectacle that is that band. As the path through a field full of drunk punks and garbage clears into a hangar, something horrible is realized: That sardine can is where the fucking show is. After wandering in, we realized Iceage was playing. The weird hybrid of d-beat post punk with clean vocals wasn't mixed very well, and no one in the surrounding area looked to be in the horny-dancing or violent-dancing mood, probably due to the fact it was impossible to make anything out in such a large, echo-y area. This warranted a smoke break.

Once outside, I noticed lots of people laughing about how embarrassing the Casualties' set was going to be. It is worth noting that some of the mockers were fashion boutique bullet-belt buyers, just as they were accusing the goofy veteran street punk act to be. After a half hour of set up time, the Sid Vicious Juggalos known as the Casualties took the stage. They sounded bad. All that could be heard was screaming, cymbals, and bass drum. The mild humor just seemed kind of cruel after about five songs and an exit was necessary.

It was time for a palette cleanser. When someone mentioned that UV Race was playing and "had sort of a Devo/Jay Reatard thing going on," the choice of where to go next was made. The backyard pavilion-ish area at Red 7 was littered with record-collecting mortgage punks drinking expensive beers. After a quick atmosphere adjustment to a more mature setting, a large bearded man in a speedo walked out to grab the mic as a band tuned. It was good to know this wasn't a stuck-up big kids party. The speedo-clad vocal warrior and his band of merry men (and one merry woman, on rhythm guitar and saxophone) belted out a furious half-hour of jagged but danceable songs. They did it with the right attitude and simplicity, at the right moment in the night.

This was the end of my ability to pay attention to music for day one. Granted, I was running on no sleep and was pissed about missing Marked men and the Damned. My apologies to anyone wondering what they missed out on; I missed out on it too. But the motel beckoned for swimming and sleep. There were so many more bands to see, the best show being the opener at Hotel Vegas.

Click through to page two for day two of the fest.