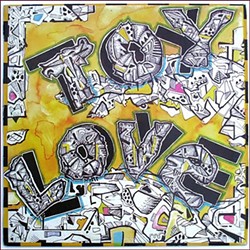 Our Bellevillian sludge overlords Egg Chef have teamed up with Burning Sky Records for an international tribute to the late New Zealand punk greats Toy Love. Though Toy Love was only together for less than two years, the pioneering punks inspired a sonic movement that later became known as Dunedin sound. (Band members Alec Bathgate and Chris Knox formed the Tall Dwarfs soon after the band split.)

"They're by far one of the only and best bands that has had a big impact on us since formation," said Egg Chef's Josh Jenkins. "Sucked it in daily like a big dish of pasta."

Jenkins, who has been a Toy Love fan for a while, said the band stumbled across the tribute project and begged to be a part of it.

"Finding out we were on [the tribute] was very exciting," he says, "though I had no idea big New Zealand names like Hamish Kilgour, Don McGlashan and Proud Scum (who were on the AK79 compilation with Toy Love) would become involved, which is mind blowing. One of the best things to happen being a part of the tribute was coming into contact with Toy Love's drummer [Mike Dooley]."

Egg Chef is covering a song it's already played live for awhile now: "The Crunch," from Toy Love's self-titled 1980 release. Jenkins notes, "'The Crunch,' is a term in New Zealand for 'the inevitable outcome of events, that which happens despite what you think or want." (Dooley shared that bit of trivia with Egg Chef.)

"Burning Sky Records has been promoting [the Toy Love tribute] artist by artist on the Internet and putting up their covers -- many of which are better than ours and definitely worth checking out," Jenkins says. "The musicians are so bizarrely diverse that is almost jarring from cover to cover, but that's what makes it wonderful. Mission accomplished if one person reads this and decides to look into who and what Toy Love is."