Five Unexpected Places That Electric Six's Music Has Appeared in 2010 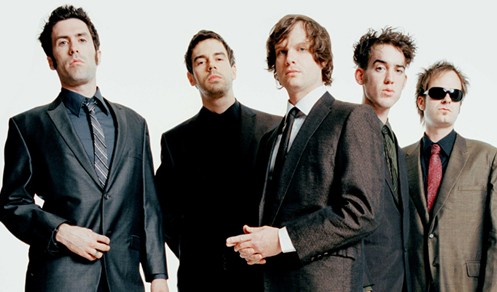 Despite releasing seven albums and amassing a cult of fans through relentless touring -- its appearance at the Firebird this Sunday is their third St. Louis show in twelve months -- Electric Six is still known to most people for two songs: "Danger! High Voltage" and "Gay Bar." So while the timing of Electric Six's strange re-emergence into mainstream media is odd, the songs being used in this comeback of sorts are not. But wait -- what strange re-emergence? Just look at this list.

5. "Danger! High Voltage" in The Simpsons Although The Simpsons doesn't use licensed music as often as say, Chuck or The O.C., it's not unheard of for the long-running cartoon to feature popular music. In this year's "The Squirt and the Whale," the Simpsons attend an alternative energy expo and purchase a wind-turbine to use as their sole source of power. When the turbine stops providing energy, the family tries a series of wacky hijinks involving a bounce house, power saw and a garage door to generate electricity, as seen in a montage set to, you guessed it, "Danger! High Voltage."

3. "Danger! High Voltage" on Dancing With The Stars What makes this appearance so strange is that the song is actually covered by the house band, who somehow manage to out-cheese Electric Six with this gloriously over-the-top rendition involving pyro and zesty horns that soundtracks an instructional tango dance. It's a tragedy that ABC has seemingly removed the clip from the web (if you can find it, please post it in the comments).

2. "Gay Bar" lyrics in a National Review column. National Review scribe Jonah Goldberg wrote a short column in the second August issue about a man in New York who plans to open a Muslim-themed gay bar on Ground Zero. Naturally, Goldberg awkwardly shoehorns the lyrics to "Gay Bar" in the column. Of course, the man hoping to open this bar is Greg Gutfeld, host of Red Eye on Fox News and a noted Electric Six fan who has had the band's singer Dick Valentine on his program numerous times. It might have helped if Goldberg mentioned this association in the article.