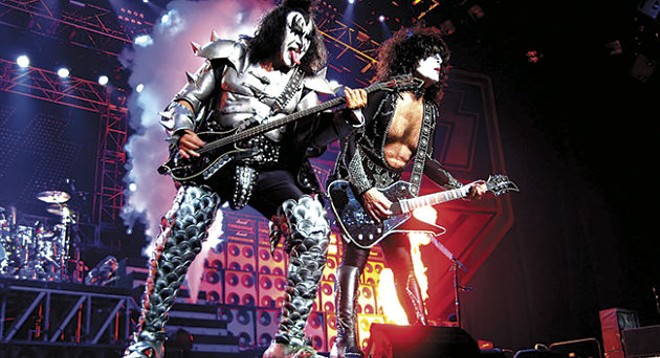 Credit: Keith Tarrier / Shutterstock.com
One of the weirdest concerts to ever go down in St. Louis has to be the spring of 1974’s KISS kite-fly in Forest Park. The outdoor gig, put on by rock station KSHE (94.7 FM) on March 29, attracted scores of rockers to the city’s crown jewel — and only a few of them gave a shit about kites.

Most, rather, were there to see KISS. The face-painted rockers were new to the road at this point, having released a self-titled debut album barely a month prior. And by many accounts, the show was lit: Thousands of rowdy longhairs climbed fences to see the young band, which had arrived to the park in the back of a windowless Ford Econoline. It would be KISS’s biggest headlining show yet.

Fittingly, the historic day has now been immortalized in a new song by a former Webster College student who was there — tripping balls in the front row.

“Back in ‘74” — performed by Endless Boogie, the long-running psychedelic band of guitar freaks out of New York City — tells the story of singer Paul Major’s day at the KISS kite fly. The song appears on Vibe Killer, Endless Boogie’s latest album, released May 19.

At the time, Major was a nineteen-year-old English major completely unaware of the pummeling he'd soon receive. His story is told over the course of a six-minute jam, a mid-tempo ride that’s unashamed of its vintage groove. The lyrics, too, are rich with warmly provincial St. Louis references.

Here’s how Major’s day went: Along with friend Wolf Roxon and a few theater students from his Webster dorm, Major set off for the show. But first, they dropped LSD, as one does before seeing KISS. Oh, and inspired by David Bowie, Major’s friends from the Webster conservatory had shaved off their eyebrows the night before.

Into the mob of KISS fans they waded.

“We make our way up to the stage — right up front — and the acid’s kicking in,” Major deadpans in the song. “Twenty-thousand people here, 457 kites, KISS on stage, at the kite festival. KISS did not bring their own kites. They were kiteless.”

The people in the crowd were “mostly redneck-ish type dudes” and Major and his friends from Webster stuck out like sore thumbs, a fact that dawned on them precisely as the set ended. They were surrounded by aggro headbangers, charged on Budweiser and KISS.

“It became apparent literally after they finished ‘Black Diamond’ and the music stopped,” Major tells the RFT. “I don’t remember if a girl said, ‘What’s with the dudes with no eyebrows?’ or if the bottle hit first, but it just started right away. All of the sudden there was a sea of angry faces around us and people shoving.”

Then, as Major sings in the song, “Somebody punched Wolf." He himself was smacked in the face with beer bottles.

“Getting out of there was totally like Fellini Satyricon or something, where all the faces were ugly, and we were trippin’ and people were abusing us,” Major recalls. “It seemed like a million years going through this crowd to get out of there. It was truly crazy, I think one of only two times where I could say the trip was going bad in my life.”

This is, of course, the perfect sort of experience for a song. It was Jesper Eklow — he shares guitar duties with Major in Endless Boogie — who suggested Major put his story to music in the summer of 2015. Major had a broken left arm at the time and couldn’t play guitar (it had to do with an amplifier-loading-related fall after a show in Brooklyn), so he put his artistic energy into the lyrics.

“I was basically channeling my memories,” Major says. “I was trying to bring back that day in 1974 at the KSHE kite-flying contest that turned into such a crazy nightmare.” Endless Boogie formed in 1997 as a reason for Matador Records employees and Major (at the time a professional record dealer) to get together and jam. Despite the group’s unambitious intentions, it was asked to open for Stephen Malkmus in 2001, and later recorded two twelve-inch records (Volume 1 and Volume 2) in 2005. The band released a full-length in 2008, Focus Level, which Pitchfork called a "choogling zen-prayer" of blues-rock. And with Vibe Killer, Endless Boogie offers a six-song LP, of which “Back in ‘74” is one of the standouts.

History has made that show legendary for St. Louis and KSHE, but it was big for KISS, too. Forty-three years later, it remains the band’s go-to St. Louis story. KISS bass player Gene Simmons even brought it up during his panel at the St. Louis stop of Wizard World Comic Con in April.

Major says the show was one of his two most mind-blowing experiences in St. Louis (the other was seeing AC/DC at Mississippi Nights in 1977 along with about 200 other people). He recalls his time in the city as “magical.” He and Roxon would later form psych-rock group the Moldy Dogs here, before Major upped sticks for LA and then New York.

Other than jaunts to Europe and, recently, Australia, Endless Boogie doesn’t tour much, and Major sort of demurs when asked if he sees an Endless Boogie St. Louis gig on the calendar. “I’m obviously a much older dude now,” Major says of the fairly grueling prospect of touring the U.S. as a psych rock band in your sixties.

When Major is asked if he's thought about whether KSHE might play the song, he seems surprised, as though it hadn’t occurred to him.

“Oh, that would be awesome,” he says. “It really brings me back to those crazy St. Louis days, that’s for sure.”


Vibe Killer by Endless Boogie is out now on No Quarter Records. Paul Major has a book about his decades-long record collecting obsession, Feel the Music, out May 30 on Anthology Editions.