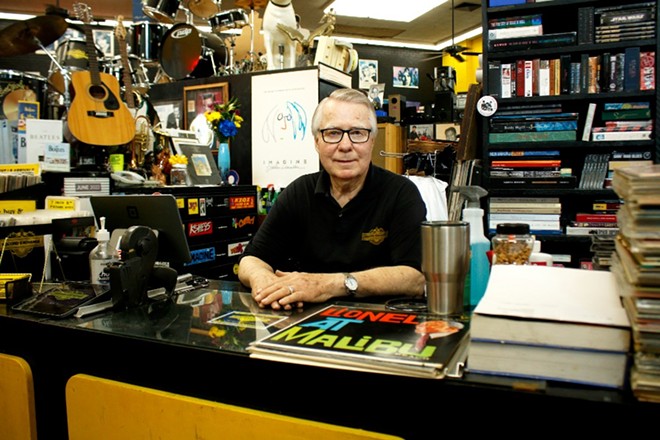 In a building of a former library, bins of records, shelves of CDs and boxes of products tower almost as high as the ceiling. Only the sound of customers peeling through plastic-covered records can be heard over classic rock playing over a loudspeaker.

This is the Record Exchange (5320 Hampton Avenue, 314-832-2249), where owner Jean Haffner, 76, has built a literal library of records and music paraphernalia in the former Buder Branch of St. Louis Public Library in St. Louis Hills.

Haffner’s overwhelming inventory of vinyl records, cassettes, laserdiscs, 45s, VHS tapes, CDs and more, is the combined behemoth of nine record stores and two antique shops. He opened the first record shop in 1976 but closed all but one of the 11 stores about 15 years ago after he “got tired of traveling.”

Record Exchange has been a haven for St. Louis audiophiles and physical media collectors since. Only here can customers find Duran Duran records, a Camp Rock-themed guitar and an entire box set of ER in the same place. Not that anyone would ever need all of those things at the same time, but it’s the novelty that sets Record Exchange apart.

Other than its expansive inventory, at the heart of Record Exchange is Haffner.

A life-long music lover, Record Exchange is the amalgamation of Haffner's passion for collecting and sharing music, even if that hasn’t always been his central focus.

In the 1970s, after spending 30 years of doing what was expected from him, Haffner felt a little restless.

He had gone to college, served in the Navy and found a cushy job afterward at the urging of his father.

After working a handful of corporate jobs — even a gig working in HR for Ross Perot, a brash Texas billionaire who sold computer systems and unsuccessfully ran for president in 1992 — Haffner wanted more.

So, in 1975, Haffner decided to quit his humdrum day job as a personnel director for Traveler’s Insurance to pursue something he had a passion for.

“The suit-and-tie, 9-to-5 routine just got old,” Haffner says. “I could see a gold watch at the end, and I wanted more than that. I wanted to do something. I wanted to build something, so I built 11 stores.”

Although he’s never been a “trained musician,” music has always been a constant in Haffner’s life.

Inspired by Elvis and Ricky Nelson, Haffner bought a guitar at 6 years old, but jokes he “wasn’t smart enough to learn how to play it.”

“I started beating on the back end and thought, well, ‘I’ll just get me some drums,’” he says. 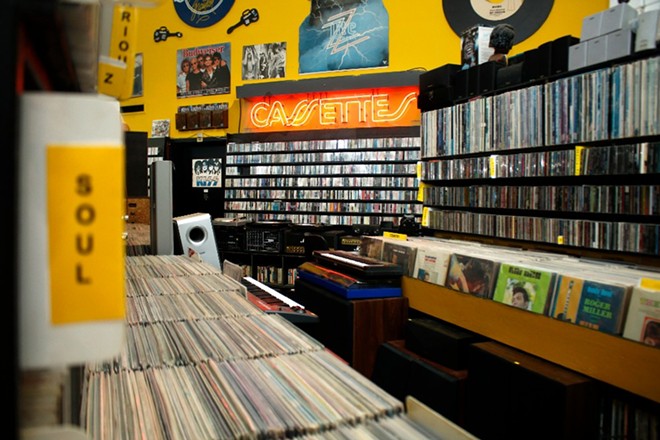 Monica Obradovic
Record Exchange sells anything from cassettes and LPs to DVDs and VCR tapes.

He performed at high school and college dances with his band, which would eventually play instrumental tracks on Buddy Holly albums, though without Haffner.

“He used the guys I used to play with to put down the instrumental versions of his songs,” Haffner says. “If I’d have stayed with the band, I’d be on three or four of Buddy’s albums. That’s my almost-claim to fame.”

As he grew up in Amarillo, Texas, Haffner satisfied his hunger for music by mowing lawns to buy records.

“As a kid, I listened to the radio a lot,” Haffner says. “If there were songs that appealed to me that I wanted, I went to the record shop and bought them. I didn’t have much money back then because an album cost $3.79 or something like that — a lot of money for a kid — so I mainly bought 45s.”

In 1957, he bought his first album, Ricky Nelson’s debut, “Ricky.” His record collection would eventually grow to the thousands.

“I accumulated so many, I became ‘The Record Guy’ in school,” Haffner says. “We had a lot of parties, and I was always the one who was asked to bring the records.”

In shop class, he built a holder for his 45s that reached about 4 feet off the ground and filled it to the top.

That same handiness remains today. Haffner built most of the shelves and fixtures in the Record Exchange himself.

Haffner’s personal collection eventually grew so large he was able to start his business. He estimated he accumulated up to 5,000 records.

“It was a lot at the time, but sometimes I buy that many every day,” Haffner says.

Haffner’s mounting inventory has taken up pretty much all of Record Exchange’s space. The store is stuffed with merchandise, so much so that one could likely spend days in the store and not see everything.

But what’s in the store isn’t even the full collection. Haffner says he has a full warehouse that could fill the space “two or three times, easy.”

Monica Obradovic
A view of Record Exchange from its second floor.

That’s why Haffner is looking for a larger space. The Record Exchange's building has been up for sale multiple times, most recently in 2020. Haffner says he has “run out of room" but hasn't had any luck in finding a buyer.

“I’ve got several people who have wanted it, but for some reason, all the deals have fallen through,” he says. “The closest one I had was with a microbrewery. They wanted it really bad, but wanted two houses on the other side for parking. One’s available, but the other one, an old man lives there. He’s like 100 years old and still mows the grass.”

In the meantime, Record Exchange isn’t going anywhere, and neither is Haffner. On any given business day, Haffner is likely manning the store’s front counter or helping customers. It’s a job that’s “never been a job.”

“I want to die on that stool up in front, like the Rolling Stones,” Haffner says. “I hope they die on stage, where they belong … I’d rather be here than any place else.”