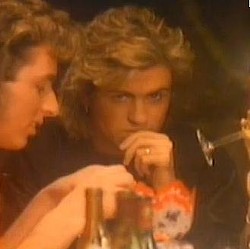 A still from the "Last Christmas" video.

As of 5 p.m. Friday, November 12, KEZK (102.5 FM) has started programming Christmas/holiday music 24-7 on the terrestrial airwaves and online at KEZK.com. According to a press release, the station "will feature traditional songs from top artists like Bing Crosby, Elvis, Nat King Cole, Burl Ives, as well as contemporary Christmas favorites from Madonna, Paul McCartney, The Eagles, Elton John, Mannheim Steamroller and more." I gave the station a spin over the weekend in the car, and indeed, the soft-glow of sugarplums and weepy nostalgia was already in full effect. (So was the Mariah Carey, natch.) I even detected some slow-jam action within the Christmas song playlist -- although no Wham! yet. And by my book, it's not the holiday season until the first sign of "Last Christmas." Video below.