Only the most bitter cynic can leave a Matt & Kim show without experiencing at least some amount of fun. Sure, the Brooklyn duo's brand of hyperactive, simple synth pop isn't for everyone, but it's hard to worry about the particulars of their music when they throw a party this outrageous. Between shooting off confetti, Kim dancing atop the pit audience's hands and inciting most of the male crowd members to take off and twirl their shirts for a song, Matt & Kim whipped its loyal and sizable audience into a frenzy and didn't let up.

As the house lights dimmed, a laughably cheesy MIDI version of "Gonna Fly Now" (a.k.a. the theme from Rocky) that faded into Jay Z's "Empire State of Mind" blared from the stereo as Matt & Kim ran across the stage and motioned for everyone to get up. Soon after they were blasting away from their platform that held Matt's keyboards and Kim's minimal drum set (snare, bass drum, floor tom, tambourine and cymbal). Songs like "It's a Fact (Printed Stained)," "Yeah Yea" and "Cinders" cut to the quick with naggingly catchy melodies and Kim Schifino's straightforward, often punky drumming. Occasionally there'd be a mid-tempo number like "Good Ol' Fashioned Nightmare," but even in these moments, the Pageant's floor was a dance party. In fact the show's sugar-rush energy level didn't flag until near the end of the night during an off-key rendition of slow ballad "Northeast."

Even in their rare missteps, Matt & Kim earned the audience's goodwill through sheer exuberance. They clearly love their concert experience as much as their fans. Kim's joy was especially infectious; her mile-wide grin and ferocious pounding made her look like an anime character brought to life. The relentless "you guys are awesome" banter probably didn't hurt either. And while some of that chatter was just sucking up, the bond between Matt & Kim and its audience was real and it was a sight to behold. 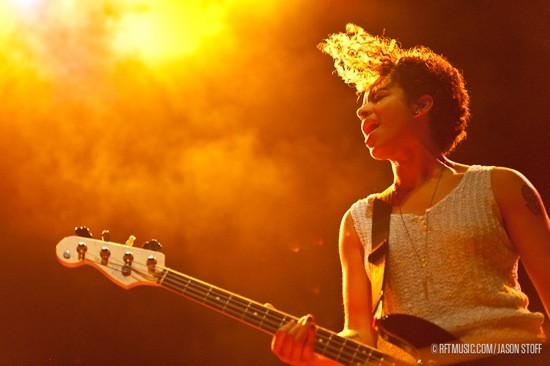 Garage punk/pop trio the Thermals proved to be a great foil to the night's headliners with a strong set that brought the rock. Given how dark and political some of the material is, the group is a lot of fun live. Like Kim, drummer Westin Glass abandoned his kit when he didn't have a part so that he could amp up the crowd and bassist Kathy Foster bopped up and down while flicking out driving bass lines. Guitarist/singer Hutch Harris seemed genuinely happy to be at the show, and his achingly sincere vocals fit in well on the bill. Most of the group's well-chosen set focused on up-tempo chord-based rock, which worked well to lead into Matt & Kim. But it was heartening to see the Thermals let some songs breathe, like sparsely arranged newer song "Never Listen to Me." As fun as the band's main attack is, it starts sounding similar when not paired contrasting styles.

Opener Le Blorr (or Bastard Lovechild of Rock n' Roll) was odd in that it was practically two bands in one. When Chris Hess played guitar, he and drummer Adam Winn did a solid if unoriginal take on fuzzed-out blues-rock that brought to mind some other duos that got famous with that style. To be fair, Le Blorr doesn't adhere to the verse-chorus-verse structure as rigidly as the White Stripes and the Black Keys did/do, but comparison was tough to avoid (hints of Wolfmother seeped through as well). But when Hess took to the keyboard, the duo broke into synthesizer dance-punk mode. This sound isn't far from Matt & Kim's, but it's slightly grittier and more rhythmically complex. Despite the disconnect between the styles, the duo's charisma won over the crowd in their short but sweet set.

Critic's Notebook: Matt & Kim played mini-covers of tunes such as Biz Markie's "Just a Friend," DJ Kool's "Let Me Clear My Throat" and Europe's "The Final Countdown," that served as interludes and transitions. Not a bad way to keep the party bumping.

Personal Bias: I didn't pay much attention to Matt & Kim until I accidentally wandered into their WUstock performance in April while I was walking my dog. It was pretty tough to ignore the pandemonium once I got close enough to figure out what was going on.

Overheard: "MATT & KIM! I'm Kim and you're Matt, isn't that right?" -- A younger girl to me as she, her friends and everyone walked to the parking lot. Obviously, she was still giddy from the show.