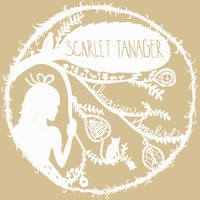 In this past week's Homespun column, we spent some time with Scarlet Tanager's American Songbird, an album of sweetly sung, enthusiastically performed pop songs. The band also put together an unforgettable video for the song "Tumbleweed," which you can peep below.

We caught up with lead singer and songwriter Susan Logsdon over email to learn more about this young band's tangled family tree and to uncover the secrets of wrangling all those puppets.

Christian Schaeffer: Tell us a little bit of how the band got together. There appears to be a lot of overlap between family members and romantic partners in this band.

Scarlet Tanager was formed in the Spring of 2010. I had been doing the singer/songwriter thing by myself all through college. After graduating, getting married, and moving to St. Louis in 2009, my husband, Michael, and I started trying to put together a band. We first met our drummer, Matt through some friends at church. My brother Josh was a natural choice for the band. We have played and recorded a lot together, and he has seen my music from the very first songs written on our dad's old Yamaha guitar in my pink bedroom growing up to where it is today which is pretty cool. We then called on our friend Dustin, our bass player.

Dustin and Michael were in a band together when I first met them in 2006, so they go way back. We played our first few shows as a five-piece. Josh was dating Jordan at that time, and we had talked about her being in the band to play keys and sing backup but were hesitant because she and Josh were newly dating and didn't want to get into anything that could get weird. When they got engaged last July we asked her to join the band! They got married in January.

I think it's really cool having such overlap between family members and spouses in the band, but not in a Partridge Family kind of way. I just think it helps make the songs seem so real. A lot of the songs on American Songbird are about either Michael or my family, and having both on stage while we play gives it a depth that is otherwise hard to achieve.

How did the video for "Tumbleweed" come together? It's certainly an ambitious calling card for a new band.

At the beginning of this year Josh, Jordan, Michael and I had been talking a lot about doing some kind of creative project together. We didn't know what it would be, but we thought it would be cool to work on a big, elaborate, creative project just for fun. We threw around a lot of ideas including some kind of large scale installation art and short film ideas ranging from stop animation, claymation to puppetry. Michael was listening to some rough mixes of our recordings in the car one day and "Tumbleweed" came on.

He could envision a little puppet hand hitting the tiny piano keys, the puppet head bobbing to the beat, the miniature garage, and a tin foil rocket ship. He came home and told me about this idea, and we sat down and listened to the song and came up with a storyboard. We brought it to the rest of the band, and they were super excited and had some great ideas for things we could add and how things could actually work. We then set a deadline of two weeks to get everything built and filmed. We worked every single night on it. The guys focused on the sets-the miniature garage which ended up being about 6 feet tall and 12 feet wide, the tree-horses (the apparatus Josh came up with for the paper trees on a conveyor belt of sorts), the western town, etc. Jordan and I made all six puppets, over 30 outfits and tons of props ranging from instruments to paper trees to glittery stars. At the end of the two weeks, it became very clear we were not ready to film.

It ended up taking about a month and a half of almost every night and weekend. After we wrapped up the filming--it took about a month for Michael to sort through the footage and edit it all together.

American Songbird pulls a lot from indie pop and some bright twee moments. Musically, what are some influences or touchstones for the band?

Being from a singer-songwriter background, I am personally influenced by Patty Griffin, Regina Spektor, Feist, Rilo Kiley and Patsy Cline to name just a few. As a band I think our influences broaden a bit because there are six of us but definitely include Los Campesinos, Feist, The Beach Boys, I'm From Barcelona, Fleet Foxes, any pop from the '50s and '60s. Everyone in the band has their own influences, and those influences can find their way into the songs, but we work really hard to try and keep the sound from straying too far from who we are.

The song lyrics vacillate between childhood innocence and more grown-up concerns. What types of stories or emotions do you hope to get across in these songs?

I hope to convey the general emotion of growing up with this album. For me, this album tells the story of leaving home, falling in love, and moving on. Being that this is the first recording that I have ever released, it really is a 'best of' album of the past six years. These were years of great transition for me leaving my home in Florida and moving 1,000 miles away to go to school in Illinois. I think in everyone there is a deep sadness or a longing for your childhood. I think that's just part of growing up. I hope to convey some of that longing on the album.

I think the album also gives the listener a window into the excitement of falling in love as a lot the songs were written when I first met my husband. I wanted the album to reflect the almost childish excitement and feeling of being smitten when you first fall in love with someone. I think when the band got added to these songs, it really did help find that sound that would represent that emotion. When you look one of the latest songs I've written, "Baby Bunting," you can kind of see the maturing of our love and our relationship. One neat thing I like about the song order on the album is that the very first song on the album, "Birds of the Dawn," was the song that I wrote and surprised Michael with by singing it to him at our wedding reception. It is immediately followed by "The Flags in the Parade" which was the very first song I ever wrote for him right after our first date. What's next for the band? Are there any plans of future tours or recording?

I am really excited about the next album. I can't wait to record. We have talked about doing some touring, but we're always waiting to finish the album. Now that it is done we might have to! We really want to get out there and meet new people and bands more than anything.