RIP Slayer Guitarist Jeff Hanneman: Does This Mean the End of Slayer? 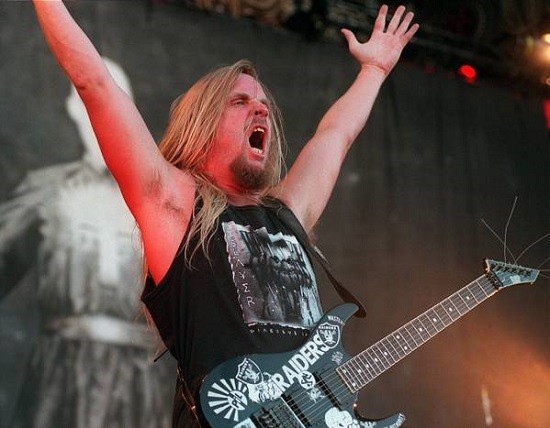 As a lifetime die-hard Slayer fan, I had to do a double-take when I got a text from RFT Music editor Daniel Hill asking if I'd like to write a piece on the passing of Jeff Hanneman. "Fuck yeah, I'd like to write something about Slayer," I thought. But wait a minute...WHAT?

I had not yet heard of his passing, and while well aware that he hadn't been touring with the band recently after contracting a horrific case of necrotizing fasciitis from a spider bite, I believed him to be in otherwise good health, and thought his return to the stage was imminent. Right now I feel like the kid in that '80s movie Trick or Treat did when his hero, Sammi Curr, died. Hard to say much more right now than just, "What the fuck?"

"Slayer is devastated to inform that their bandmate and brother, Jeff Hanneman, passed away at about 11 a.m. this morning, near his Southern California home," the band's publicist stated on Thursday. "Hanneman was in an area hospital when he suffered liver failure."

See Also: - The Best St. Louis Metal Shows in May

At this point they haven't announced if the liver failure was related to the spider bite or not, but it's not crazy to assume. As if we all needed another reason to hate spiders.

While Kerry King has always been a bit of the spotlight hog, (running around in spiked gauntlets, covering himself and everything in sight with tribal designs, and starring in Jagermeister commercials), most Slayer fans know that Hanneman has always been the real heart and soul of the operation. Think of your favorite Slayer song, and it was probably written by Hanneman: "Angel of Death," "Raining Blood," "South of Heaven," "War Ensemble," "Die by the Sword" and about 80 percent of the setlist the current version of Slayer have been touring on. All written by Hanneman.

It could also be argued that Hanneman has always been the better lead guitarist in the band. While King seems to rely on a lot of squeals and feedback and dive bombs and tricks, Hanneman has always dug a little deeper into his solos. He played lightning-fast, but kept the chaos controlled, incorporating melody and style into the band's evil sound. Also, if you notice on many live Slayer recordings and videos, one guitar is usually much louder in the mix. Hanneman's.

He also always struck me as the coolest guy in the band. I remember seeing them at the Pageant years ago, and as I was doing a metal spin in the Halo Bar, there was Hanneman standing right there at the bar, just hanging out. No one else from the band bothered to come out, but Hanneman stood there and socialized with any fans who wanted to talk to him, casually sipping on a drink and blending in almost unnoticed. Like a complete prick, I decided to throw on a Slayer song while he was standing there, because it was one of my favorites that the band had not played that night. The song was "Chemical Warfare" (also written by Hanneman) -- I thought he'd lose his shit, or roll his eyes, or have some kind of reaction to one of his songs being played by the DJ. (I mean, hey, the guy was one of my heroes, I had to fuck with him!)

But he didn't even blink, didn't give a shit at all, just kept sipping his drink and being friendly with fans. What a cool guy. He was always laid-back and funny in interviews, and never made a clown of himself the way Kerry King always did. (And still does and always will.)

Jeff Hanneman was a great songwriter, great guitarist and always seemed like an all-around great guy. He wrote some of the most frantic, sinister and memorable heavy-metal songs of all time. He not only changed heavy music, he changed lives, inspiring many like myself to pick up a guitar and never put it down. The first song I ever learned how to play was "Black Magic" from the Show No Mercy album, swear to Satan. I was eleven years old and sucked, but I loved the feeling of power that playing that Hanneman riff gave me. His death is an undeniable loss to the metal community and to music in general. As stated before, Hanneman has always been a hero of mine, and I know there are thousands, if not millions, out there who feel the same way.

So what does this mean for the future of Slayer?