Show Review: Ladytron and Datarock at the Pageant, Monday, June 16

(Review and snaps by Annie Zaleski)

I’m tired and it’s almost too late to post this, but I’ll say it anyway: I was really disappointed in the Ladytron show last night at the Pageant. I fell in love with the band after hearing its song “Playgirl” back in 1999 or so; at a time when nu-metal and other pop crap ruled the world, the quartet’s new-wave whispers and electro-chic resonated with my ears.

Fast forward nearly a decade, and Ladytron is still doing the same type of sophisticated discotheque rock – albeit with a more sinister, less clubby edge. In fact, the new album Velocifero left me absolutely cold; the album’s songs were repetitive and droning instead of bewitching, detached and icy in the boring – not seductive – disco way. 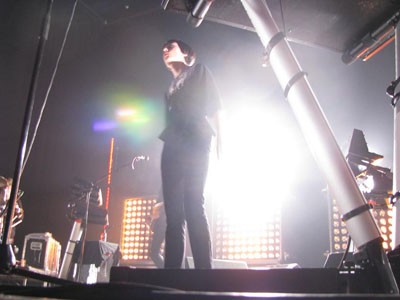 The band’s first-ever appearance in St. Louis didn’t change my opinion of Velocifero. Songs like “Runaway” and “Black Cat” stretched out for what felt like forever (although brisker new tracks like “I’m Not Scared” fared much better). And this meandering malaise infiltrated older hits “Playgirl” and “Seventeen,” unfortunately; both felt much longer than they actually were.

Ladytron’s elaborate lighting set-up – which featured strobes, LED screens and lots of sleek coordinated spotlights, and thus a cross between an ‘80s game show and old-fashioned disco – was stellar, however. Co-vocalists Helen Marnie and Mira Arroyo were backlit tastefully, and their voices blended together in perfect harmony. Several banks of keyboards, a hard-hitting drummer and clashing guitars also sounded fantastic, the right mix

And really, there wasn’t anything wrong with the set, per se. Had it not been a Monday night – and had it been on, say, a weekend night – I think the energy and my mood would have been more receptive to the concert. Something just felt off, though; I’m not sure if it was just me, feeling like an old, jaded hipster (although I wasn’t wearing a scarf/neckerchief, so I’m not a true member of the hipsterati – seriously, what the fuck is up with that fashoin?) or feeling the after-effects of a very long month of shows. 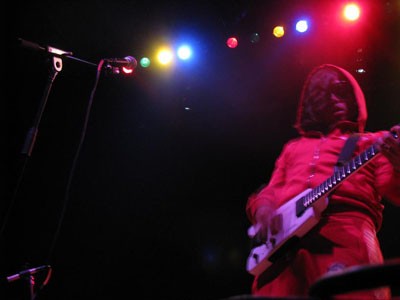 Norway’s Datarock opened the night with an amped-up, electro-punk set. They were also somewhat cheeky, dedicating a song to the “ladies” and renaming our town “St. Louis Rock City!” But there was a silly element to its pandering that made such nods charming. Dressed in matching red sweatsuits emblazoned with “Datarock” on the sleeve, the group did the running man, played goofy ‘80s instruments and generally goofed off. Vocally and rhythmically, the quartet reminded me of a Eurotrash Talking Heads, with generous hints of Devo’s quirk-rock and the Rapture’s party jams thrown in. (A reference to Boney M’s galloping disco beats went over the heads of most of the young’uns up front.) While charming, its shtick grew thin over the course of 45 minutes; performing the hit “Fa Fa” helped invigorate the crowd, but for me it was a tad too late.