The mainstream ubiquity of tattoos is nothing new, but it does make for some pretty hilarious/horrendous Google searches. We chatted with two local tattoo artists to see what regrettable tattoos St. Louisians are getting these days.

Iron Age Tattoo's Joseph Reincke said nothing surprises him after nineteen years of professional inking. Unsurprisingly, he's done a lot of Iron Maiden and Grateful Dead tattoos over the years. When asked if he's given any Insane Clown Posse tattoos, he rolls his eyes and nods ruefully: "lots of hatchet men." He's tried talking people out of branding themselves with the mark of the Juggalo, but said they always end up getting the tat anyway. "They're down with the clown. Anyone that wears funny pants like that is going to get bad tattoos," Reincke said.

Chris Greer, of Enigma Tattoos in the Loop, said he recently inked an eighteen-year-old kid with "Juggalo for Life" on top of his hatchet man tattoo. "He looks at it while I was doing it and said, 'Well, I hope I really like this band for a long time,'" Greer says.

Though each artist mentioned that too many words do not make great dermatological graffiti, the tattoos Greer and Reincke cited as cool were lyrics, and both were penned, (at least in part) by John Lennon. Reincke said he did Lennon's "Imagine" on a guy, and few weeks ago Greer had a client ask for "Blackbird." 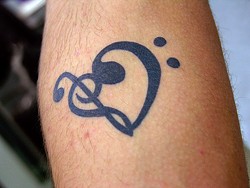 Greer said he gets a lot of kids who want the same tattoo as their favorite rapper, "even if they're bad tattoos." (We're looking at you, Lloyd.) Greer said he won't give someone a face tattoo like Gucci Mane's lame ass ice cream cone unless they're already pretty well covered--"There's no coming back from that." Stars and crosses are still hugely popular (blech) proving that just because you're committing art to your body doesn't mean you have a shred of imagination.

"A lot of times things just won't translate into a tattoo. Names are a bad idea unless it's your parents or your kid's name," said Reincke. Reincke doesn't have any music-related tattoos, but Greer does: a Social Distortion chest piece, and Clutch lyrics on his back.

Greer and Reincke may have had to ink on some truly horrible stuff. But it gets so much worse: Observe, the ten worst music-related tattoos: 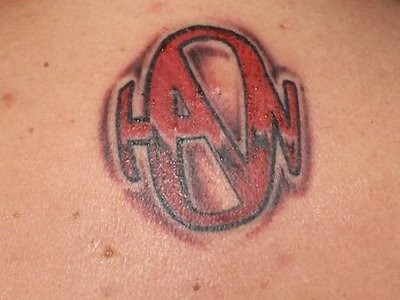