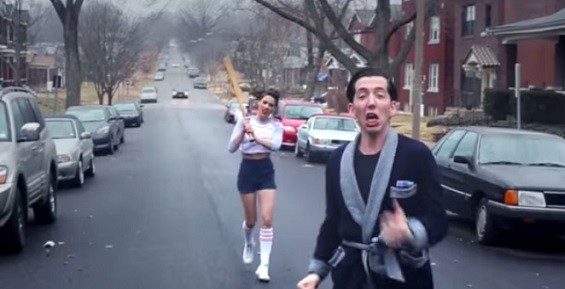 Screenshot from the video.
"She drinks malt liquor for lunch and dinner and sends me running scared."

On Friday, Pokey LaFarge released a video for the title track of his upcoming Rounder Records debut, Something in the Water, via NPR's All Songs Considered blog.

LaFarge tells NPR that the song "is about the ups and downs of a Midwestern love affair. The female character in the song doesn't always treat her man right, but no matter how crazy things can get and how hard things sometimes seem to be, he realizes that all of her quirks and eccentricities are a big part of why he loves her and that ultimately he can't live without her. I guess that's what they call love, or at least can be one definition of many."

LaFarge goes on to explain that the song's inspiration is a member of his band's girlfriend, who has actually had an El Camino on blocks in her front yard at one point in time -- a visual that is referenced in the lyrics of the track.

"The video was shot on and around Cherokee Street in south city, St. Louis," he continues. "Since the lyrics of the tune tell a vivid story, we wanted to make the video a pretty literal interpretation of the lyrics.... We wanted to shed light on the crazier side of love, and on a reality that many people face but don't necessarily share. One really important thing too was that no matter the pitfalls of their love, the humor and chemistry the two lovers share is the real takeaway, and what keeps them together."

Something in the Water will released by Rounder Records on April 7. Watch the video below.