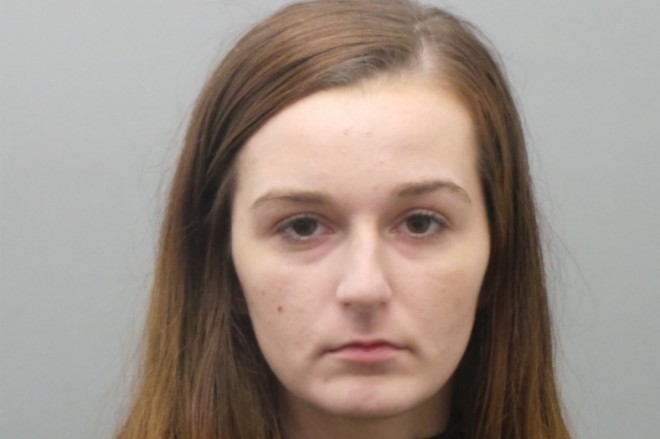 A 21-year-old woman was charged over the weekend with stabbing a cab driver in Jefferson County.

Ajla Zekan was arrested on Saturday during a traffic stop in St. Louis County, authorities say. Police had been searching for her since Tuesday when, they say, she attacked the driver "without notice," stabbing him eleven times.

She had apparently been grocery shopping that night at the Dierbergs Market off of Tesson Ferry Road, near Mercy Hospital South. The taxi picked her up nearby and drove her to Windemere Drive, south of Arnold. The cab was parked when Zekan, who was seated behind the driver, pulled out a four- to six-inch knife and began stabbing the man, according to a probable cause statement written by a Jefferson County Sheriff's detective.

The driver was able to get out of the taxi and run for help, the statement says. He was taken to the hospital with "serious injuries to his face, hand, chest, shoulder and lower torso," court records say.

The driver, 47-year-old Inam Allah Khattak, told KMOV News 4 that Zekan had him stop at a convenience store for cigarettes, but her debit card was rejected. She then had him pull up to a garage, promising that her father would pay him. Instead, she started stabbing him, he said.

"She told me, 'I want to kill you,'" Khattak, who goes by "Sunny" and drives for United Cab, told the television station.

After Khattak fled, Zekan is accused of climbing into his seat and driving off in the minivan.  The next day, the Jefferson County Sheriff's Office circulated photos from one of the grocery store surveillance cameras, reportedly showing her shortly before the stabbing.

She was taken into custody on Saturday by St. Louis County police. The same day, Jefferson County prosecutors filed charges of first-degree assault, armed criminal action and tampering with a motor vehicle.

Zekan's criminal court history is limited, mostly traffic cases. She has a pending stealing charge in St. Louis County. In that case, the judge issued a restraining order, banning her from any contact with the victim or Mercy Hospital, unless "medically necessary."

In December of 2018, she was listed as a missing person on a Missouri State Highway Patrol database, but that notice was later removed.

In her past court cases, she has listed an address at a Sappington condo complex, but the Jefferson County Sheriff's detective described her as homeless in the probable cause statement.

After her arrest in the stabbing, she was held by St. Louis County but was expected to be transferred to the Jefferson County Jail. Her bond is $500,000.