As Pujols Closes in on 700 Home Runs, He Insists He'll Still Retire 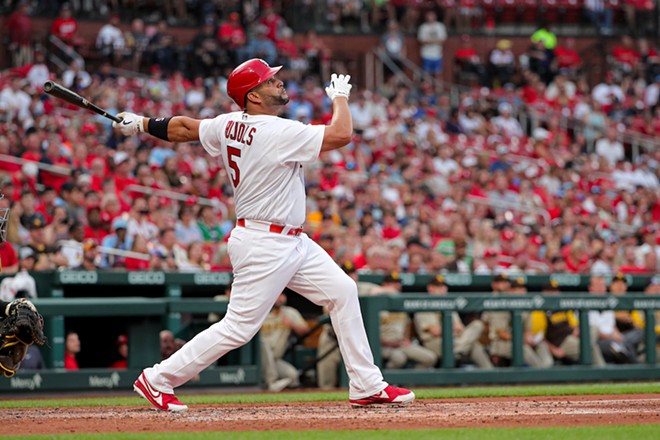 Ben Munson/St. Louis Cardinals
Albert Pujols still plans to retire at the end of the season, despite his record-breaking August.

Cardinals slugger Albert Pujols, 42, had a great weekend. He hit two more home runs as the Cardinals swept the Diamondbacks, bringing his career home run total to 692. Plus, he edged out Stan Musial and took second place on the career list for total bases. Hank Aaron is the only player with more at 6,856. (Pujols currently has 6,143.)

Despite closing in on records, Pujols told USA Today that he's committed to this being his last season.

“I’m still going to retire, no matter whether I end up hitting 693, 696, 700, whatever,’’ Pujols said. “I don’t get caught up in numbers. If you were going to tell me 22 years ago that I would be this close, I would have told you that you’re freakin’ crazy. My career has been amazing.’’

The question of whether Pujols would make it to 700 was a lot more up in the air back in June, when he didn't hit any home runs. But since August 10, Pujols has hit six home runs — more than the combined total of seven teams, according to USA Today.

“If I can’t hit 70 homers, I’m not coming back,’’ Pujols told the daily, laughing. “No, I’ve had enough. I’m glad I made the announcement this was it when I signed. Really, I wouldn’t change a thing.’’

Pujols' batting average sits at an impressive .438 in the second half of the season and his slugging percentage is .918. If Pujols makes it to 700, he'll be fourth on the all-time home run list, edging out Alex Rodriguez and only behind Babe Ruth (714),  Hank Aaron (755), and Barry Bonds (762).

Pujols had offers from other teams — most for more money — for his final season in baseball. But when the Cardinals called, he packed his bags and came back.

This weekend, he went 5 for 5 at the plate and hit 2 home runs. Even though the games were in Arizona, the crowd was on its feet, appreciating some of the final at-bats of one of the greatest in the game.

2 home runs
5 for 5 at the plate
Countless standing ovations pic.twitter.com/DqJoynSPng