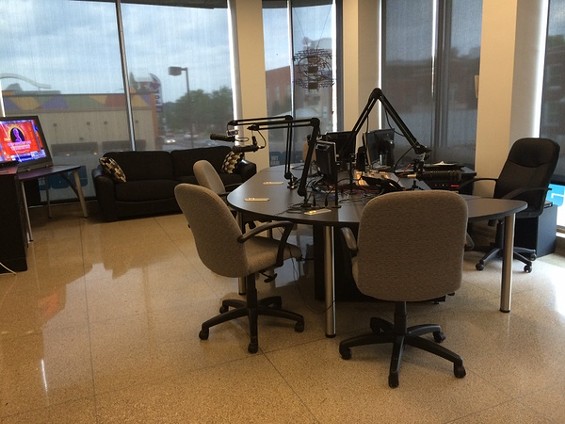 Lindsay Toler
The 590 AM studio where Brian McKenna usually hosts his radio show, The Alpha Males, is now empty during the morning drive time.

Fist fights. Name calling. Jokes about cancer. Racist insults. It was a bizarre (though not atypical) week at KFNS 590 AM, the Grand Slam Sports jock-talk station currently known as "The Man."

In the station's latest dramatic turn, Dan Marshall, president of the radio company, turned in his resignation Thursday after radio show host Brian McKenna punched him in the face and sent him to the hospital.

"It was a total mugging, a cheap-shot jumping," Marshall tells the St. Louis Post-Dispatch. "Grown men aren't supposed to act like this. I never expected it."

Mike Calvin, who stepped up to take over operations after Marshall left, says he's calling an all-company meeting Monday. He's not announcing any major changes, but he says he would like to make a suggestion to his hosts: If you're going to make fun of someone all show, choose someone outside the 590/1380 AM family.

"There are so many other targets outside the studio," Calvin tells Daily RFT.

Marshall was not McKenna's original target. McKenna originally drove up to KFNS' offices in south St. Louis to stop radio host Nick Trupiano from broadcasting crude jokes about him on his show on KXFN, which shares offices and owners with KFNS.

Trupiano spent part of his June 6 show poking fun at McKenna for bringing up his recent cancer diagnosis in an interview with the Post-Dispatch. Trupiano thought McKenna was looking for too much sympathy by dropping "the c-word," so he dropped a c-word of his own, calling McKenna "the most vulgar term for a part of the female anatomy," as the Post-Dispatch puts it, during a commercial break while his mic was still working.

"If I have something wrong with me, I don't post it on Facebook and try and get everybody's prayers and wishes. I deal with it on my own," Trupiano tells the Post-Dispatch. "I've had several members die of cancer, I'm not making fun of cancer. I'm making fun of him for the way he was portraying his cancer."

McKenna was also insulted when Trupiano called his girlfriend "hot."

"If you take that as an insult, then you're really (messed) up," Trupiano says. "I said on the air that I like Brian (McKenna) as a person, but this is a little crazy."

Even after ragging on McKenna for his comments in the newspaper, Trupiano continued his fight, hurling racially-charged insults at Charlie "Tuna" Edwards, another on-air host.

"He's a scumbag and I hope he dies of ... sickle cell, cancer, whatever, I don't care,'' he said on his show. Trupiano continued by calling Edwards "that token black guy" and "that minority tax write-off."

"I can't stand him," Trupiano said about Edwards, calling him "droopy-dog looking. "I hate him."

This isn't the first time McKenna has come to blows over what other radio hosts say about him. In 2003, he got into a fight with John Hadley, who worked at KTRS and Fox Sports Net, after Hadley criticized his work in radio.

"We went out, and he started yelling, 'You can't call me a coward and a loser,' " Hadley told the St. Louis Post-Dispatch. "I told him I never called him that ... but he said, 'I'm a trained killer. I'll come to your house. I'll kill you. I'm a martial arts specialist.' "

Hadley said he went to a hospital twice for problems with his neck, vision and wrist.