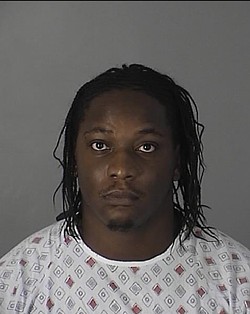 After a brief stay in the hospital, McGhee, 29, who wrestled under the names "The Future" Donovan Ruddick and DT Porter, was taken to Pasco County Jail and is now facing a first-degree murder charge, the Tampa Bay Times reports.

As seen from his mugshot, it looks like he was booked while still wearing his hospital gown. The charge report from the Pasco Sherriff's Office lists McGhee as 6'7", 270 pounds with a "muscular" build.

Authorities say that McGhee approached his 25-year-old girlfriend, Bianca McGaughey, who was also originally from St. Louis, at around 8:30 p.m. on the sidewalk outside her apartment and stabbed her multiple times, leaving her to die soon after.

It gets (even) worse: Seemingly a short time after he killed McGaughey, at 8:46 p.m., McGhee changed his Facebook profile to what looks to be an arm, or perhaps ankle, with an oozing and bloody gash. It is not clear whether this is a picture of the victim, McGhee himself, or someone else. You can view the (warning: pretty graphic) photo here and on the next page.

In a YouTube video dated 2008, you can see McGhee (as "The Future") doing his best to display the ham-it-up bluster of a professional wrestler.

Here's another video of McGhee as "The Future," wrestling in the Heritage Championship Wrestling Championship in 2010:

WWE signed McGhee to a developmental contract in 2010 but dropped him in May 2012, prompting an emotional post on his Facebook profile. He claimed, however, it was a hacker who wrote the post, which is now deleted:

Here's the full message via WrestlingInc.com:

"Guys, I don't know how much longer I can handle this. Every day is a constant struggle to keep my sanity. I love wrestling and it's all I ever wanted to do. Already going crazy since I've been for like ten months now, but it gets worse. Every day a trainer goes out of his way to rib or disrespect me in front of the boys because I've been out so long. I can't clear myself. I wanna wrestle more than anything, but I don't even know who I am anymore. It's so f--king hard. I just feel it just building inside of me and I don't know how much longer I can contain it. I have daydreams of just f--king everyone up on some real s--t. I'm not a kid. I'm a f--king man. But what do you do when the people in charge of helping you get to the main roster are the ones making your life the hardest. I've been drinking almost every day. It's to the point to where I keep Vodka and Gin in my trunk. Help me!"

Continue for more photos of McGhee, including the graphic Facebook photo posted right after the alleged murder (which, again, is fairly graphic).