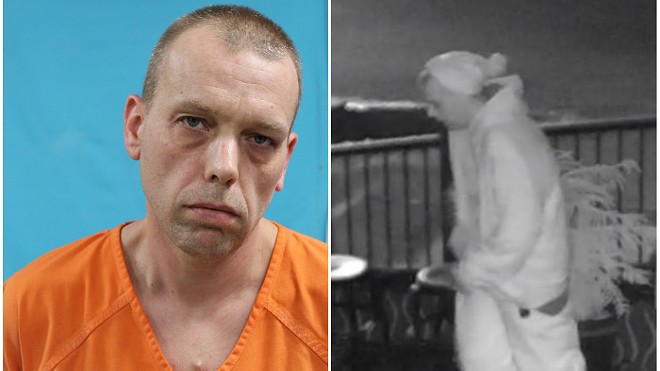 
The suspect in a Cape Girardeau mosque arson is now facing federal charges.

A day after 42-year-old Nicholas Proffitt was charged in Jackson County court with arson, burglary and property damage motivated by discrimination, the U.S. Attorney for the Eastern District of Missouri announced the ex-con would also face a federal arson charge.

According to federal prosecutors, Proffitt was recorded at 4:50 a.m. by the Islamic Center of Cape Girardeau's surveillance cameras as he smashed out a window, climbed inside, splashed some sort of accelerate around and lit it on fire.

The blaze caused major damage to the entrance and extended into the second story. The center was the home to several families, who had to flee early morning fire. Everyone escaped safely.

As the Riverfront Times reported, Proffitt has been arrested twice before for attacking Islamic centers: Once in 2005 in Dearborn, Michigan, and once in 2009 for busting windows at the same center in Cape Girardeau. He was sentenced to three years in prison for the 2009 attack.

The state charges in the recent arson allege Proffitt was motivated by a bias against Muslims. The fire came on the first day of Ramadan, and the FBI and Bureau of Alcohol, Tobacco, Firearms and Explosives joined local police in the investigation.

“The fact this fire damaged a place of worship during the Muslim holy month of Ramadan is especially harmful,” Special Agent in Charge Richard Quinn of the FBI St. Louis Division said in a statement. “Protecting the civil rights of all Americans, regardless of color or creed, is one of the top priorities of the FBI.”

Proffitt has been transferred to federal custody, according to court records.

An online fundraiser for the Islamic Center of Cape Girardeau had raised more than $128,000 by Wednesday evening.