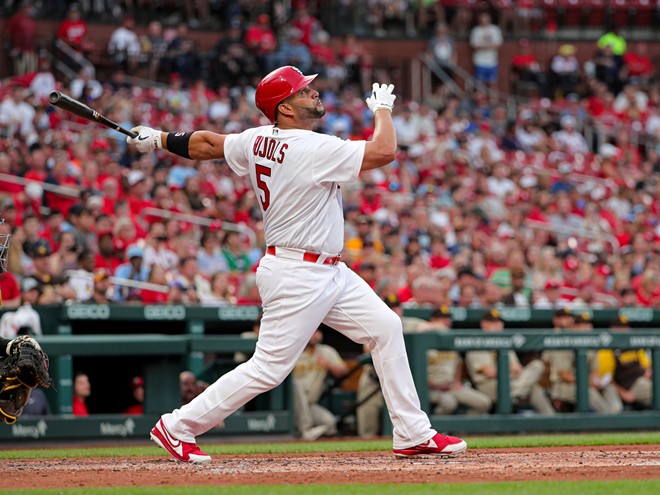 Albert Pujols blasted his 703rd home run — the last regular season home run of his career — on October 3 in PNC Park. The ball landed in the hands of Mike Hutcheson, a Metro East native, who had traveled to the Pirates’ home stadium with the sole goal of catching an Albert Pujols home run.

“I checked the schedule and realized they were playing in Pittsburgh for the final matchup of the year, and I was like, ‘I can probably do Pittsburgh, and nobody goes to Pittsburgh,’” Hutcheson, a Bellville native who lives in Trenton, Illinois, told the Belleville News-Democrat.

The lucky catch though, may prove to not be so lucky after all.

In exchange for the ball, the Cardinals offered Hutcheson a signed Pujols baseball. He turned it down. He was also offered $100,000 from a fellow fan, but he turned that down as well.

A person seated nearby, Adam Van Grack, documented the situation in a Twitter thread.

He has decided to keep the ball. Security has been posted by "Mike" with the ball. pic.twitter.com/fYABymjdPF

The only "offer" from stadium officials was "a ball signed by Mr. Pujols as a trade." He declined.


Hutcheson exited the stadium with the baseball, estimated to be worth $250,000, according to OutKick, a sports website.

But there’s another problem: Hutcheson left the stadium without getting the ball authenticated by the MLB — essentially stripping it of its value.

Hutcheson told WTAE of Pittsburgh that he tried to get the baseball authenticated, but he was unable to do so.

"I'm actually a little disappointed in both the Pirates and the Cardinals because they've made absolutely no acknowledgment [of the catch]," he told WTAE.

For a record-setting baseball to hold value, it must be authenticated by the MLB before it exits the stadium. MLB will not authenticate a ball after it leaves the stadium because it’s unclear how to verify its legitimacy.

“He's holding the holy grail for Pujols homers,” wrote a blogger at Barstool. “That is a house down payment, paying off debts, a new car, vacation spot, that ball could pay for it all. Except for the ONE thing that you can't do once you catch a milestone home run ball ... leave the stadium without getting it authenticated.”


.@TheCatOnBallyTV catches up with Belleville native Mike Hutcheson, who caught Albert's 703rd home run ball. Of course, he's offered some of @bthompson48's green seats as part of a potential trade.

A similar incident happened in September when a Bryant Junco, 38, a Milwaukee Brewers fan, obtained New York Yankee Aaron Judge's 59th home run ball. (Like Pujols, Judge was on track to set a home run record in the American League, hitting more than 60 home runs in a season.) Junco didn't catch the ball, but bought it off of the fan who did while still in the stadium. Junco says MLB representatives left when he bought the ball, and he wasn't able to get the ball authenticated before he left the stadium. Now, the MLB refuses to authenticate it.


Albert Pujols said he's not worried about getting the 700-HR ball back: "Souvenirs are for the fans. I don’t have any problem if they want to keep it. If they want to give it back, that’s great. But at the end of the day, I don’t focus on material stuff."

"Souvenirs are for the fans. I don't have any problem if they want to keep it," Pujols told Bill Plunkett of the Orange County Register. "If they want to give it back, that's great. But at the end of the day, I don't focus on material stuff."