Come to the Pink Slip for a Lap Dance, Stay for Chef Nell's Pork Steaks 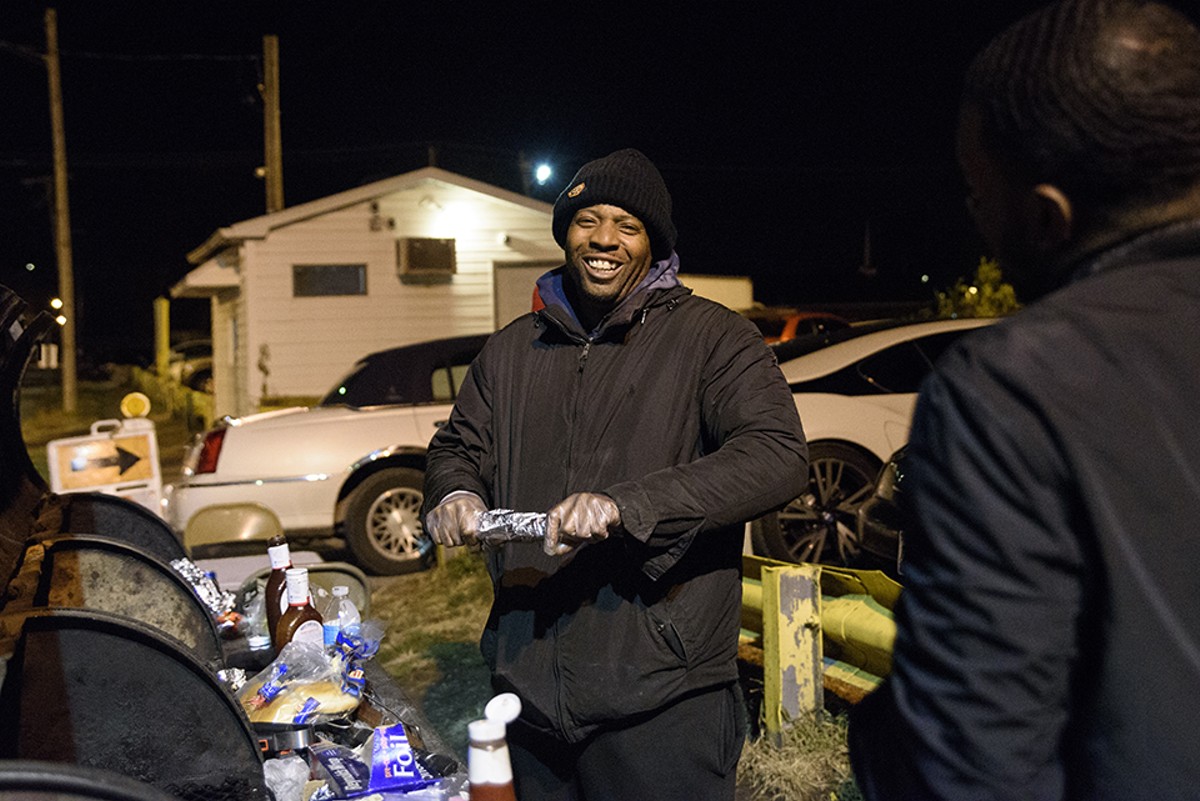 It's a couple of minutes after midnight as Chef Nell preps his grill just outside the Pink Slip. No matter if patrons are coming to the long-running Brooklyn, Illinois, club for a lap dance or a nightcap, the sidewalk chef — real name, Yarnell Sampson — is ready to provide them with nourishment or a good word, either one with a side of potato salad.

Nell has occupied the slim patch of grass and asphalt outside the Pink Slip for two years. The spot where he parks his ten-foot, three-chamber smoker puts him in front of a narrow, crowded parking lot and within sight of the front door of the "world-famous" adult entertainment spot, as well as its neighbor, Bottoms Up.

The pair of clubs have a symbiotic relationship; it's not uncommon for patrons to walk the few dozen yards from one room to the next, along the cracked-asphalt alleyway between their parking lots. If they were to walk from Bottoms Up to the Pink Slip, they'd pass the stand presided over by a friendly grillman named Ghost, who serves up his own BBQ menu just about 50 yards to the east of Nell. That's ground owned by Ed "the Parking King" Johnson, whose heavily attended lots ring the clubs.

Before reaching the Pink Slip, though, they'd probably hear Nell, who keeps up a nightlong incantation on a small, handheld microphone/bullhorn. "Baah-are-be-cuuue," his sing-song goes. "Hot and ready."

That's the basic call, but he varies the message all night, shouting out to individuals and groups as they make their way from the outer lots to the club's fortified front door. His voice blends with the unmistakable aroma of ganja hanging in the warm, strange, mid-autumn air.

"Hey, fam, we got chicken-on-a-stick, pork steaks. That's the only swine we do."

If this tiny village (daytime population: 700 souls) is the epicenter of the region's after-hours' vice, Chef Nell's voice is part of its soundtrack, a siren call for those hungry for their fourth meal or just desperate to sober up before making the drive home to St. Louis.

Sometimes his shout-outs get an immediate response, his small menu of $5 and $8 items passed off to customers by Nell or by his spotters, who run to nearby cars to take or deliver orders. Other times he has to work a customer for an extra beat or two. He can sense when he's got a live one; on these, customers bend back from their trips to cars, sometimes negotiating prices as they go. Over the course of a shift, even a "dead-ass slow one" like this Friday, there seem to be a hundred idiosyncratic moments, one for every exchange of cash for food.

An example: Around 4:30 a.m. Saturday, a pair of cousins cross the street, moving about as steady as rubber ducks in a bathtub. Nell sees them suffering and offers jerk chicken and Polishes at "hood rate, two for five." They finally agree. When the order's up, Big Cousin shouts at Slim Cousin to eat, though the smaller man is barely standing and looks at the food in his hand like it's landed there by magic. Big Cousin's a touch rocked himself, knows it.

Big Cousin drops his Polish foil pack onto the table, rubs his knuckles into the plastic and prays a fast one. "Lord, help us get home on this night."

"I know that's right," Nell says, and off the cousins go, cutting through the weedy trees and potholes towards a pay lot to the west. The chef figures that in cases like this, the pair might spend a few minutes eating in the car, drinking the bottles of water that he hands out all night for free. If he's a capitalist, he's an altruist, too, and he frequently talks about the family vibe that this lot culture has created, how his role is to keep people fed, happy, hydrated, coming back to the zone safely on another night.

He's talking about the cousins, sure, but as he talks, Big Cousin's already taking off for home, peeling a slick, late-model sedan out onto Fourth Street, running the first stop sign at Jefferson on his way back to the city. 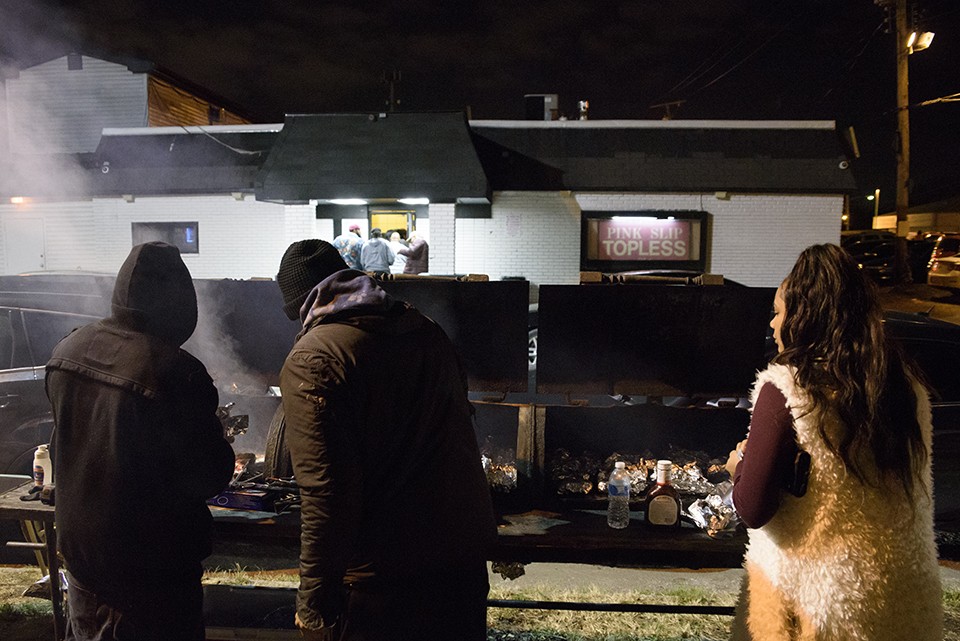 NICK SCHNELLE
A customer waits while Chef Nell and an assistant administer condiments.

Brooklyn's Barbecue Man leads a life that would tax the hardest worker you know.

Chef Nell works for a construction company during the week, a day job that runs from 8:30 a.m. 'til 5 p.m. or so. A lot of his job involves the rehab of houses and apartments into affordable residences. He's big on the idea that he's helping people in need; he dreams of his own company, someday, but for now he's good with the job he's got.

Two years ago, he took on a side job as the grillman of the Pink Slip — an enterprise that he says was started more than ten years ago by someone he calls Big Lisa, who was succeeded by a guy named Quan. After Quan died, Nell took over. Each of the three grill bosses did his or her own thing, with the basics always the same: a short menu, a grill planted in place 24/7/365 and a chef who works the wee hours of the morning, serving an audience that's directly tied to the clubs across the street.

The job requires working weekends from midnight until 6 a.m., just after closing time at the Pink Slip. But there's also a Tuesday night shift, since the Pink Slip hosts a "$2 Tuesday" promotion that draws enough audience to make Nell's street-food operation a want and a need. He doesn't get a lot of sleep, and he's honest about that: "It's what it is. When you have the work, you take it, for real."

Nell veers between fairly talkative and interestingly quiet. Even dressed in his work coveralls and a sock hat, the 40-year-old gives off the sense that he was a solid athlete in younger days, which is true, having played basketball as a young man with up to nine former NBA players, in both organized and playground settings. He's got an everyman look, and those coveralls reflect the fact that he's often going from one gig to another; if he's lucky, there's a short nap somewhere in between.