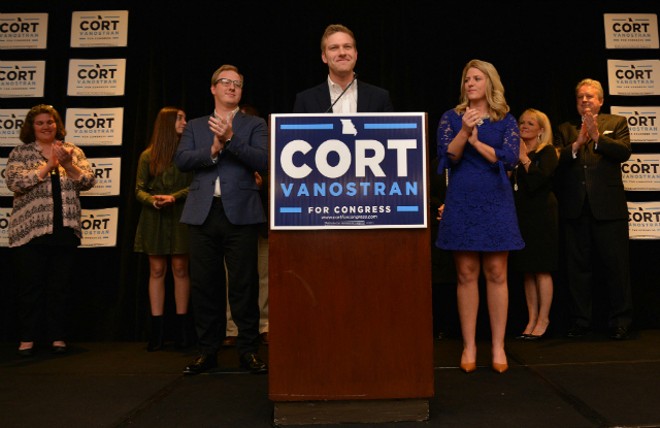 U.S. Rep. Ann Wagner (R-Ballwin) survived the closest race of her congressional career, holding off Democrat Cort VanOstran in a year that saw key House districts across the country flip from red to blue.

VanOstran, a 30-year-old Clayton lawyer with a Harvard degree, ran an  energetic shoe-leather campaign, betting that a healthcare platform would persuade voters in a traditionally Republican stronghold to consider an earnest Democrat.

But in the end, he had too much ground to cover. Wagner had previously dominated a series of Democrats in a district that is nearly 90 percent white and generally more affluent than others in the state. In her three past races, she won by twenty percentage points or better. The unofficial margin in this year's contest was about four percentage points, or roughly 15,500 votes — a marked improvement for Democrats, but still short of what was needed.

Wagner has been a Republican power broker for more than three decades, working her way up through state party leadership before she landed a post as ambassador to Luxembourg under President George W. Bush.

A hard-line anti-abortion politician, she ran a relatively quiet campaign, focusing on support for the military, law and order and her work on legislation to fight sex trafficking.

VanOstran highlighted one of the criticisms of Wagner — her reluctance to engage with constituents — by barnstorming across the district, holding multiple public town halls while pointedly noting his opponent had held none during her time in office.

Healthcare was the engine of his campaign. In commercials and on the trail, he described his mother's reliance on the Affordable Care Act before she died of cancer two years ago.

Wagner had enthusiastically worked to undercut so-called Obamacare, telling reporters that casting her vote against the act had felt like a scene from the movie Braveheart.

VanOstran included a clip of her crying "Freedom!" in commercials. He also tried to appeal to voters in the suburban district on issues of gun reform and campaign finance, drawing a distinction between his refusal to accept corporate donations with the Wagner war chest, filled with contributions from political action committees from major industries.

VanOstran still managed to raise more than any recent Democrats in the district, a strength that helped him rise from virtual unknown to serious competitor. But he could never get Wagner to engage. She never agreed to his invitations to debate and preferred not to acknowledge she had an opponent at all.

In the end, it turned out to be a winning strategy. While Democrats seized control of the House, including a Republican incumbent's seat across the state line in Kansas, Wagner remained out of progressives' reach.

"I was wrecked," Greenstein said of the moment when the loss was clear.

Tom Hellauer contributed to this story.