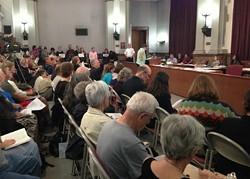 The second and final public hearing on a controversial water contract ran late last night after well over 100 people crammed themselves into Room 208 at St. Louis City Hall.

Representatives for groups opposed to and in favor of a deal between the city's water division and a French multinational company called Veolia spoke before members of the Board of Aldermen's Public Utilities Committee for roughly four hours. Veolia employees and contractors were vastly outnumbered by opposition speakers, but the decision on the contract will ultimately be up to just the three people on the city Estimate and Apportionment Committee -- Mayor Francis Slay, Aldermanic President Lewis Reed and City Comptroller Darlene Green.

The conclusion of the hearing left a single question hanging in the air -- now what?

Controversy has stalled the Veolia deal since winter, as a coalition of social justice activists, environmentalists and labor interests repeatedly objected to the company's record in other cities in the country and around the world. For the full backstory, check out our feature, "Hosed."

Veolia executives and contractors spoke in favor of the $250,000, four-month-long consulting contract, including one employee who extolled the virtues of the company's diversity hiring program. Several Veolia North America executives seemed upset by signs held by members of the audience naming other markets Veolia has history in. The signs said things like "Rennes, France DUMPED Veolia," "Sauget, IL REGRETS Veolia," and "Lee, MA REJECTED Veolia."

"I'm frustrated with some of these signs," said Scott Edwards, vice president of communications for Veolia North America. "[Lee, Massachusetts] is a blue-collar, working town and their victory in rejecting Veolia cost each citizen $1,700 per head. And when you think about the working families and what we as a company could have done...we're extremely proud of our record and our accomplishments."

"This isn't the first time you've seen the signs," returned Committee Chair Dionne Flowers. "Welcome to City Hall. This is politics. And this is just how things get done here."

Members of the coalition Dump Veolia asked that the city...do just that. What was perhaps more surprising were allegiances that were revealed from the dais. Alderman Shane Cohn and Alderwoman Christine Ingrassia asked Veolia executives extremely pointed and seemingly critical questions, while the other aldermen stayed fairly neutral. At one point Ingrassia asked if there were any pro-Veolia attendees who were not financially linked to the company (there weren't). After a Veolia spokesman informed Cohn that the company has a triple-B+ credit rating, Cohn deadpanned, "Do you realize the city has a better rating than Veolia does?"

Here's part one of the testimony (three hours' worth), we'll update with part two when it's available:

Update: Here is a recording of the final 17 minutes. At one point Veolia North America VP David Gadis drew an audible reaction from the audience when he said, "The chairwoman said earlier, you wouldn't be here if it wasn't for--this was part of the election. The mayor won. I mean, he won this...The mayor was for this deal."

Flowers reiterated throughout the meeting that the Board of Aldermen has no say on the contract, prompting one speaker to ask if the hearing was a "waste of time." The three people who will ultimately make the decision, Slay, Reed and Green, were not there. Both Slay and Reed had a representative at the hearing; there was no one in attendance from Green's office.

It isn't clear when the Estimate and Apportionment Committee will take up the deal again, and no telling if the collective eight hours worth of public testimony changed anyone's vote.

After the jump, check out the most recent draft of the Veolia contract.