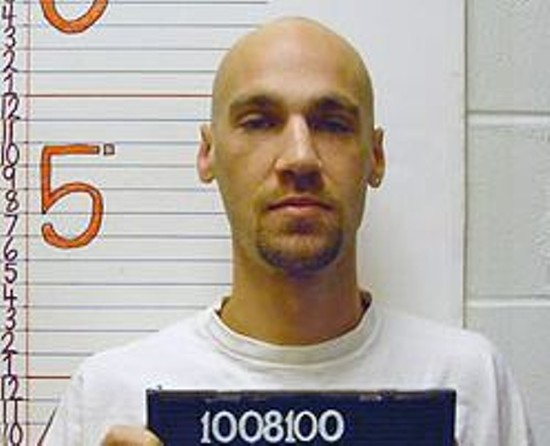 While Missouri candidates and their supporters cheered (or lamented) the results of yesterday's primary elections, the state of Missouri busied itself with ending the life of death row inmate, convicted rapist and murderer Michael Worthington.

He was pronounced dead at 12:11 a.m. this morning, ten minutes after receiving a single dose of the sedative penobarbital. As the drug entered Worthington's system, he appeared to breath heavily for fifteen seconds before closing his eyes for the last time, according the Associated Press.

The fact that Worthington died fairly quickly is significant -- his is the first execution since Arizona's two-drug cocktail took nearly two-hours to kill Joseph Wood, who died gasping "like a fish on shore gulping for air."

Worthington was sentenced to death for the 1995 rape and murder of 24-year-old college student Melinda "Mindy" Griffin during a night robbery in Lake St. Louis. Though he pleaded guilty to the murder at the time, in recent years he's claimed his confession was fabricated and that he was too drunk and high to remember what actually happened.

"There is no question about the brutality of this crime - or doubt of Michael Worthington's guilt," said Nixon in a statement. "DNA evidence and his possession of items stolen from her home reinforced his confession and guilty pleas to murder, rape and burglary."

Worthington directed some choice words of his own at Nixon last week. During a phone interview with Missourinet's Mike Lear, he compared Nixon's use of secret compounding pharmacies to the heinous medical experiments performed by the Nazis.

"Basically he's no different than a Josef Mengele and Adolph Hitler, you know what I mean? This place is a baby Auschwitz," he said at the time.

Along with Arizona, two other states that use a multi-drug cocktails have presided over horrifically long executions. In January, Ohio inmate Dennis McGuire died after 26 minutes of labored breathing, and Oklahoma's April execution of Clayton Lockett only ended when the man's heart gave out after 43 minutes.

With Worthington's death, Missouri's seven 2014 executions place it in a tie with Florida and Texas. All three states use the single dose of penobarbital to end life.