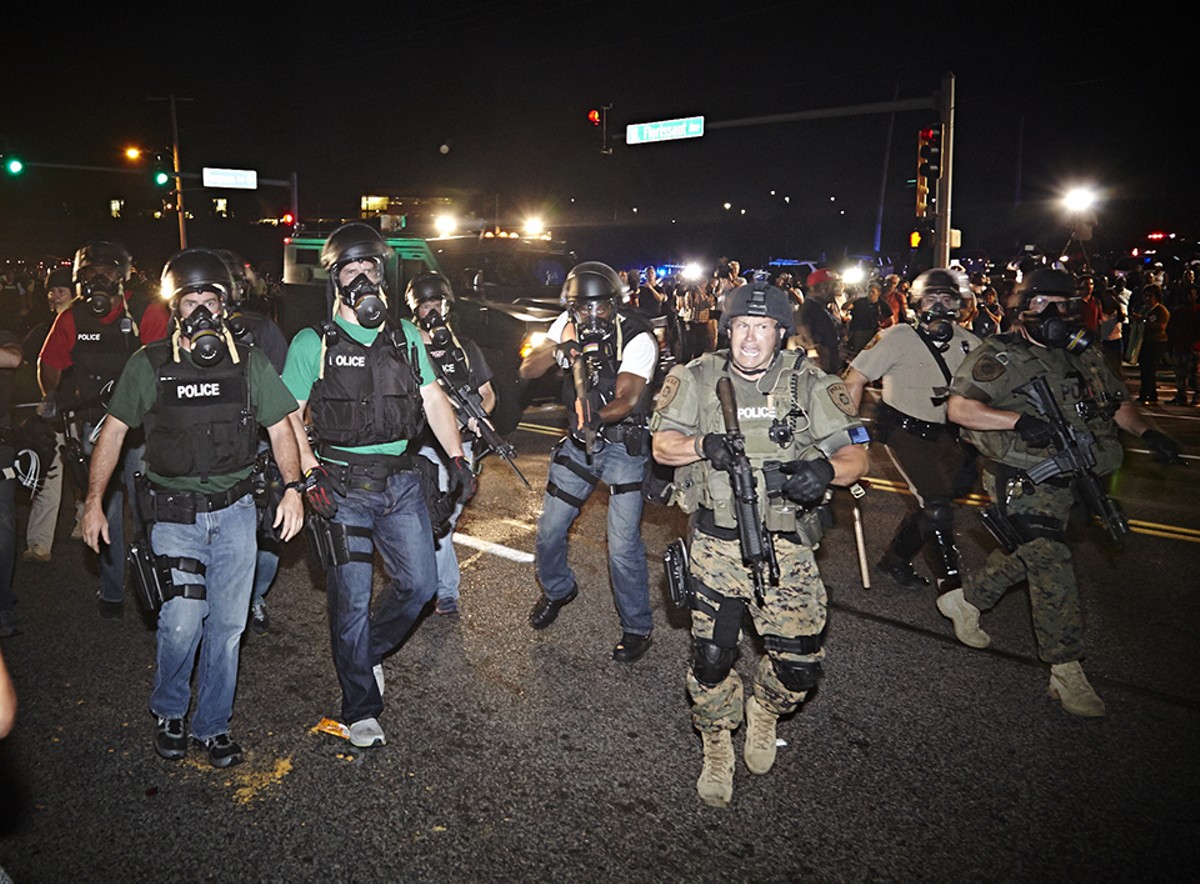 Images of heavily armed police six years ago in Ferguson shocked the country. Now, similar scenes are playing out in every major U.S. city. STEVE TRUESDELL

After Ferguson police Officer Darren Wilson killed Michael Brown in 2014, the U.S. Department of Justice focused its searchlight on the city's police force.

This was separate from an investigation into the actual shooting of the black teen. Over the course of six months, attorneys from the DOJ's Civil Rights Division and law enforcement experts examined more than 35,000 pages of police records, tagged along on patrols and analyzed data on car stops and searches. They spent time witnessing the happenings at the city court and interviewed dozens of people accused of violating city codes.

"Our investigation showed that Ferguson police officers routinely violate the Fourth Amendment in stopping people without reasonable suspicion, arresting them without probable cause, and using unreasonable force against them," then-U.S. Attorney Eric Holder said at the time.

It wasn't anything protesters had not already shouted about in city streets after Brown's death, and in fact it was their world-changing demonstrations — and local law enforcement's smashmouth response — that drew the Justice Department's attention in the first place.

Unsurprisingly, George Floyd protests across the country in memory of the 46-year-old black man killed by Minneapolis police have drawn comparisons to what happened in Ferguson. But even as more details point to widespread problems in the Minneapolis Police Department, it would be naive to expect a similar response from the current Justice Department.

Under the Trump administration, the nation's chief law enforcement entity has largely abandoned its most powerful tools for oversight and reform of police departments. Shortly before he was pushed out by Trump in November 2018, then-Attorney General Jeff Sessions signed a memo that shifted the feds away from court-enforcemed agreements with police departments like Ferguson's — consent decrees that forced them to make sweeping changes to policies and day-to-day operations. Sessions' move also effectively stopped the DOJ from a gentler alternative: collaborative reform initiatives. Those involved working with police departments, including St. Louis County's, to assess their operations and come up with solutions.

"This is a Justice Department that is simply uninterested or unwilling to engage with local police departments," says Richard Rosenfeld, a criminologist at the University of Missouri-St. Louis and past president of the American Society of Criminology.

Rosenfeld says the Minneapolis Police Department, like Ferguson before it, seems like a natural fit for a consent decree. And even though people from across the political spectrum, ranging from U.S. Sen. Roy Blunt (R-Missouri) to the Rev. Al Sharpton, have publicly said the feds should open a "pattern or practice" investigation into that department, it's unlikely to happen.

In October 2018, a month before he signed the memo, Sessions spoke to the Chicago Crime Commission as that city was facing a potential consent decree spurred by the police killing of Laquan McDonald and subsequent cover-up. Sessions blasted the idea that police departments needed anything but support from the federal government.

Trump forced Sessions out a month later over bickering during the Russian collusion investigation, but the disdain for reining in problem police departments lives on. If anything, Trump's "law and order" bent has only grown stronger as he rages against the protests filling city streets day after day, night after night.

THEO WELLING
Protesters fill the street and sidewalks on June 7, 2020, outside the St. Louis Justice Center.

Like the killing of Michael Brown, the death of George Floyd was a signal flare that summoned the eyes of a nation to an ugly history of abusive policing.

Workers in a Minneapolis corner store called police after they say the 46-year-old paid for cigarettes with a counterfeit $20 bill. The smallness of the initial incident made for a familiar starting point of minor incidents that escalate beyond all reason. Floyd was quickly handcuffed, and police officers recognized he was in some sort of medical distress, calling for an ambulance shortly after. When Floyd didn't want to go into the back of a police SUV, officers shoved him inside, only to drag him across the seats and out of the other side. Officer Derek Chauvin, a nineteen-year veteran with a history of complaints against him, pulled him out of the SUV's door and onto the street, where he pinned him facedown on the ground.

For nearly nine minutes, a stomach-churning cellphone video would show, Chauvin kneeled on the back of Floyd's neck, ignoring pleas from bystanders to ease up. Floyd himself begged for just enough mercy to inhale and exhale.

"I can't breathe," he groaned.

Chauvin wouldn't move. As witnesses begged him to stop, pointing out that Floyd had lost consciousness, the longtime cop stared placidly from his perch. Two other officers helped hold their prisoner down while a fourth moved to stand in front of Chauvin, serving as a human barrier should anyone get any ideas about intervening. By the time an ambulance arrived, Floyd had been out for nearly three minutes. The officers helped medical workers roll his limp body onto a stretcher. He would never recover.

The boldness of the episode was searing. At times, Chauvin looked directly into the cellphone camera of a seventeen-year-old girl filming him. He appeared almost bored, maybe a little annoyed by the witnesses but apparently unconcerned about any consequences for his particularly merciless brutality. Out of seventeen complaints against him in his career, his only punishment had been a letter of reprimand, police records would show. We would learn that Chauvin, who now faces charges of second-degree murder and manslaughter, was a training officer for the younger officers at the scene, two of whom had yet to complete a full week of patrols. He was in charge of showing them how to be a cop.