Elected Leaders Get an Earful about the River Des Peres

Tishaura Jones, Cori Bush and other leaders listen as neighbors recount a disaster they say they saw coming 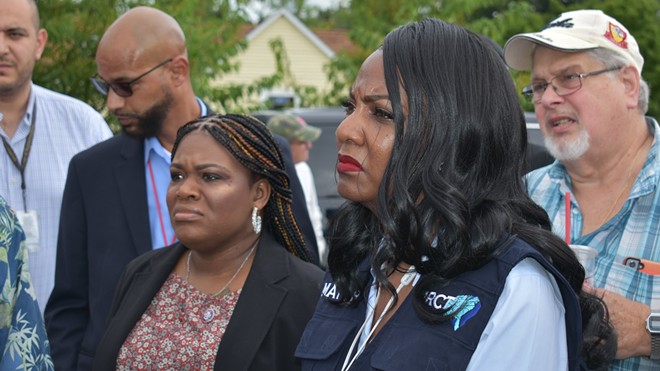 When top elected officials visited the south city neighborhood of Ellendale yesterday afternoon, residents made it clear who they blamed for the severe, sewage-laden floodwaters that ruined their homes and submerged their streets.

"MSD has failed us," one woman said, referring to the Metropolitan St. Louis Sewer District.

"MSD needs to be held accountable," said another resident. "They've failed our neighborhood."

Mayor Tishaura Jones, Lieutenant Governor Mike Kehoe, Congresswoman Cori Bush as well as several aldermen and state representatives were at the Francis R. Slay Park in Ellendale to survey damage from the flash flooding earlier in the week. The crowd of about 25 residents expressed gratitude to the elected officials for coming. They just really wanted them to do something about MSD and about the River Des Peres, which MSD operates.

"We just keep getting the same thing, sewer water," said a third resident. "Runoff water is one thing. Sewer water is a whole different ball game."

Numerous residents also told the elected leaders that they'd been calling MSD for help but had not been able to get through.

The Ellendale neighborhood is much longer than it is wide, and running through it lengthwise is the River Des Peres, which is essentially an open-air sewer system. It conveys rain and waste water from as far away as Creve Coeur through south city and into the Mississippi.

Reporter Danny Wicentowski called the River Des Peres a "concrete-lined creek for human waste" in a 2019 story for the RFT. 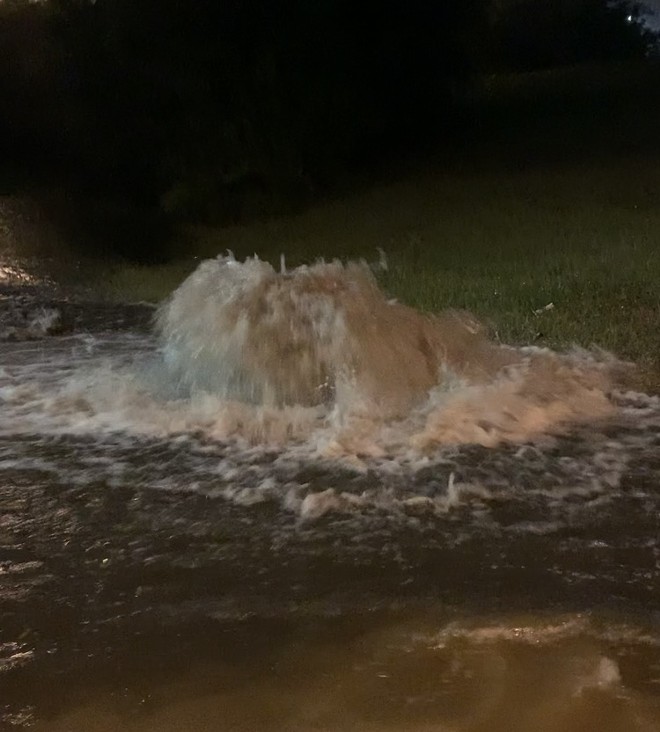 So when the River Des Peres backs up into Ellendale, a high volume of sewage makes its way into people's homes and onto the streets, residents said.

"I was carrying my three kids, my three dogs and my wife on my shoulders through neck-high sewage," said Ellendale resident Andrew Schafer. He said he made the first trip from his house to higher ground with the dogs as a "test run" to make sure he could do it. He went back and got his children, then his wife.

"And there's shit underneath, there's fences, there's bushes," Schafer said. "There's one spot where I had to go under and bounce back up because it was so high."

Neighborhood association president Matthew Sisul said that Ellendale had never seen flooding to the extent it did earlier this week. However, more minor backups in basements are all too common.

"The last decade has been rough," said Sisul. "There have been flooded basements. I've heard 18 to 20 inches, which to me is still a lot. But nothing like 4 or 5, or even 7 feet of water."

Sisul said he didn't know the exact reason the River Des Peres was so prone to flooding in Ellendale.

"We've been asking that for a while," he said. "I suspect that's because we're on a combined sewer system." He added that sometimes sewage comes into people's homes through their toilets, more commonly it's up through their storm drains.

One man recounted to Kehoe that he had to float his children to safety atop a door that had come off its hinges.

Ellendale residents Jeff and Debbi Boshans say they have tangled with MSD more than their fair share of times throughout the 30 years they've been in Ellendale. They live on Odell Street, between the River Des Peres and McCausland Avenue. A while back they moved their bedroom into the basement as they did some work on the first floor of their house. Jeff tells the RFT that when his phone began buzzing in the early hours of Tuesday morning, he thought it was an Amber alert.

Then, when he got out of his bed, his feet touched water. Soon, water was nearly to the top of their basement steps.

Outside the Boshans’ house, a geyser had erupted out of a manhole.

When the mayor and other officials came to the park on Wednesday, the Boshans were sure to be there. Wearing a cap emblazoned with the name of the carrier he served on while in the Navy, Jeff explained why it was that MSD had drawn so much ire from the neighborhood. But when St. Louis sees 9 inches of rain in one day (almost one quarter of the average rainfall in a year), all that water has to pass by Ellendale on its way to the Mississippi. Residents here say the system just can't handle it.

Mayor Jones said that concerns about River Des Peres were already on her radar prior to this week's floods. She said that a few weeks ago she'd been at some neighborhood meetings further south in the city, around Interstate 55, when the issue of the River Des Peres flooding came up as a point of frustration.

"I went back to my staff and said, 'Why isn't MSD applying for any of this bipartisan infrastructure money about to come down the pipeline?'" Jones said.

She added: "This is an opportune time to apply for this money and to fix River Des Peres once and for all." 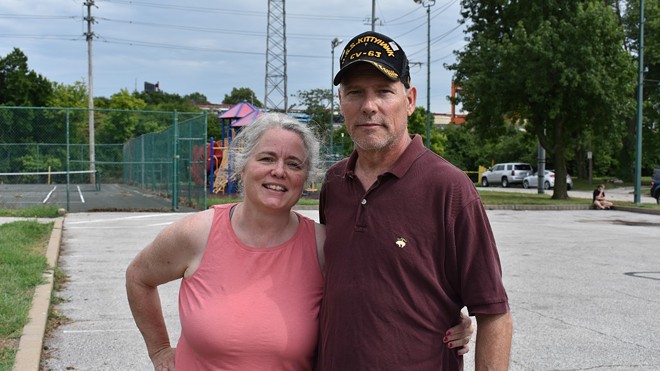 Ryan Krull
Debbie and Jeff Boshans two days after their home was flooded.

"We will also be reaching out to the Army Corps of Engineers to see whatever else [we] can make happen," Congresswoman Cori Bush told the RFT. "I think that if everybody is working, we will be able to make something happen. Because this can't keep happening." 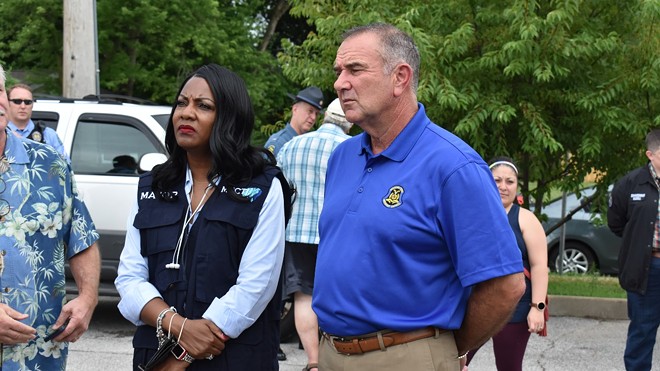 "The River Des Peres was built in a time when all this concrete did not exist," Baringer said. "We need to start thinking about giving tax credits out to corporations and people for pulling up their concrete so that we now have a permeable surface that can take in and absorb the rain that's coming down."

The night before last, the Boshans, clutching their cat wrapped in a towel, were evacuated from their home in a boat. Jeff Boshans collects and restores vintage motorcycles, which if he can even find them are now severely — perhaps irreparably — damaged. When asked if it was any comfort to have the politicians here, he said that yes, it did help.

"The relief is that I think now the cat is out of the bag," he says. "People know that there's a real problem."

The RFT reached out to MSD for comment. We will update the story when we hear back.