Emerson Mulls Move From St. Louis in $14B Blackstone Deal 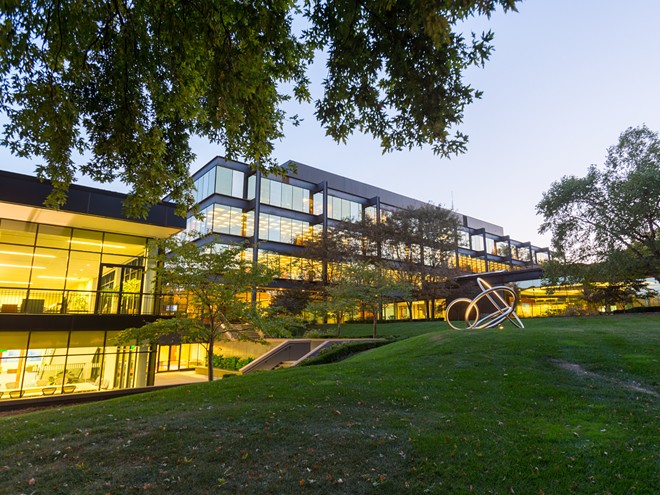 Emerson Electric, a Fortune 500 company headquartered in St. Louis, could be leaving the area.

The business announced on Monday that it will sell its Ferguson office space while re-examining the location of its headquarters.

Emerson struck a deal to sell a majority stake in its Climate Technologies to the private equity arm of New York-based investment management company, Blackstone. The deal, creating a joint venture between the two companies, is valued at $14 billion.

Emerson also plans to sell its Ferguson campus headquarters. The joint venture will own the Ferguson location, and Emerson will lease it for three years, with the option to extend for another two. In the meantime, Emerson said it will consider a new headquarters.

The electric company with 1,300 St. Louis employees has made Gateway City its home since 1890.

“Ultimately, the decision on the headquarters location will be made based on the best strategic interest of the company,” Emerson President and CEO Lal Karsanbhai said in a statement.

Nathan Rubbelke, innovation editor for the St. Louis Business Journal, which broke the news, told Fox2 this deal has been in the works for over a year.

“They had this new CEO come in last year,” Rubbelke said. “It’s really him putting his imprint on the company in many ways. They say it’s a team effort, and they’ve done this as a team, but this is something they’ve been working towards for 18 months. It’s not like they woke up yesterday and said, 'Hey, let’s sell this off, or sell the headquarters.'"

Emerson is not the only big area company to consider leaving St. Louis. Over the past few years, Centene, the Clayton-based health insurance company, has also abandoned the St. Louis area. With 90 percent of its workforce remote, it emptied nearly 1 million square feet of office space in St. Louis — leaving vacant buildings and lots across the metro area. It has also explored other headquarters homes.

Jason Hall, CEO of Greater St. Louis Inc., said in a statement that he hopes Emerson will stay.

“I shared with [Karsanbhai] our belief that the St. Louis metro continues to the best location for Emerson’s future and that Greater St. Louis Inc. would immediately begin working with partners to make that case as the company goes through its process," Hall said. "St. Louis has tremendous post-pandemic momentum. But we compete in a global market for talent and investment.”